Dominion’s unimaginative plans for another isolated building downtown drive another nail in the Financial District's coffin.

When physical change comes to a city’s streets and sidewalks, it often occurs slowly and incrementally. Sometimes change is welcome, sometimes not so much.

The latter is the case with the proposed new office complex that Dominion Resources plans to build on the downtown block bounded by East Cary, Canal, Sixth and Seventh streets.

The 21-story, glass-faced building designed by a Houston architecture firm, Kendall/Heaton Associates, will “enhance” the city skyline, according to the announcement that site preparation gets underway this month. The enhancement will be slight, because at 413 feet, the tower hardly will stand out in the crowd. It will be just slightly taller than the nearby Federal Reserve Bank or SunTrust towers.

Sadly, there’s been little mention of how the Dominion complex will meld with the city grid and bring energy to the overall pedestrian experience. That’s because it won’t. From best guesses, the 908,000-square-foot behemoth will be another isolated suburban office parklike development. And rather than contribute physical density to the neighborhood — which is what gives vitality to our best downtowns — it will waste precious downtown real estate with yet another office tower rising from a dull and windswept plaza.

Sure, expect the requisite piece of plop art to create some kind of human scale and humanistic (sort of) focal point, but big deal.

The Fed, the Riverfront Plaza’s twin towers, the James Center and worst of the all, the existing Dominion office tower — across the street from the new building site — are self-contained Financial District developments that behave architecturally in smug isolation. Dominion’s current building is set above sidewalk level atop an isolated, landscaped platform that hides a parking deck.

The new Dominion project will contribute another nail in the coffin of this district’s corpse. I think of this every time a major music or sports event is presented on nearby Brown’s Island. Hundreds of cars are parked on the streets immediately north of the Downtown Expressway and patrons flock down Second, Fifth and Seventh streets to the venue.

En route, they stroll past block after block of surface parking lots or suburbanlike office complexes. Despite several decades of development in this part of downtown, the paths to Brown’s Island offer little with which the pedestrian can engage. From an architectural, historical and planning standpoint, the lower Financial District is a dead zone.

Well, it’s about to get deader.

Consider: To make way for the new project, Dominion is demolishing a stolid old hulk of a building, the Richmond Plaza. This is a long-neglected, six-story office building that was built in the 1920s by Liggett & Myers Co. for manufacturing cigarettes. Much of the building’s brutal countenance comes from the aggregate stone facing that was slathered on the concrete and brick structure in 1977. Underneath, however, the concrete and red brick facade is quite striking.

You have only to examine how similar, former factories along Tobacco Row in Rocketts Landing or in Scott’s Addition have been restored for residential or office use to see how handsome this building could be. The massive new infill apartment complex at Cary and 19th streets, by SWA Architects, successfully picks up on the aesthetic of its century-old neighbors.

Inside the old Richmond Plaza building, the original hardwood flooring is intact and spectacular. 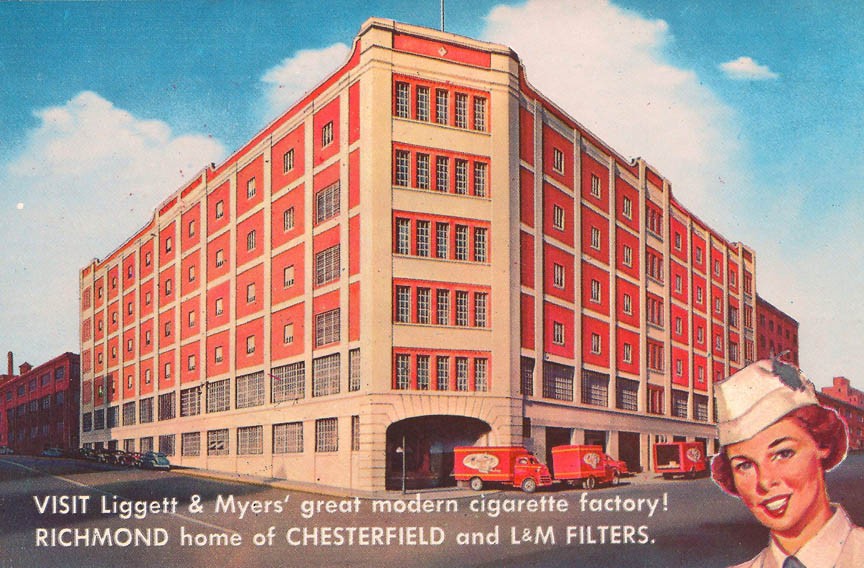 Did Dominion, always spouting environmental best practices, seriously examine saving and repurposing this building — a survivor of a bygone time when manufacturing was a driving economic factor in downtown? If scores of other area operations, large and small, have enjoyed operating in similar buildings, why couldn’t Dominion? Sure, it couldn’t accommodate all the 1,000-plus employees it seeks to move, but perhaps a tower could be inserted at its center.

Instead of taking the ecologically savvy path of renewing this historic resource, a building that meets the sidewalk squarely at every turn, speaks to local history, and would provide a special, beautiful and unique work space, Dominion is demolishing a solid and desperately needed anchor.