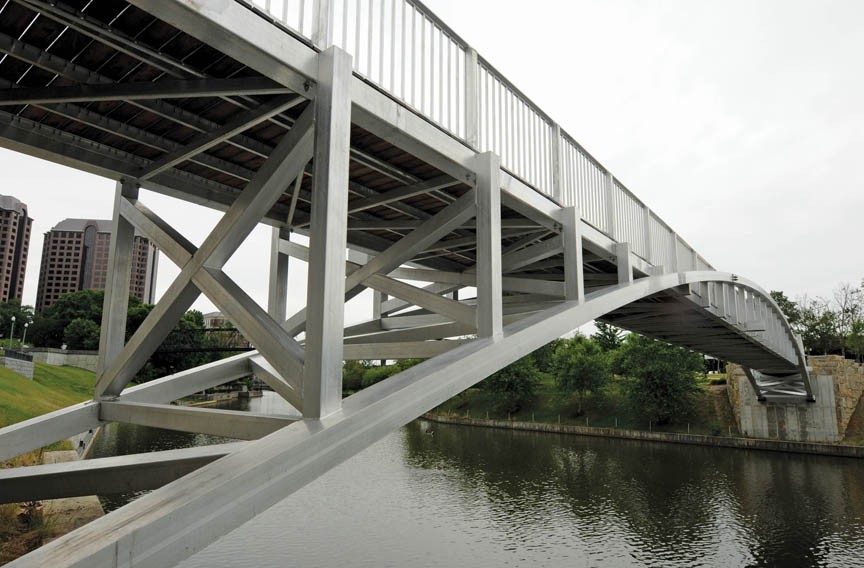 It isn't too much of a stretch to consider the ribbon park system that begins at Great Ship Lock Park below Tobacco Row, picks up steam at the granite-lined Turning Basin near 14th Street, then snakes its way westward onto Brown's Island and on through the wilds of Belle Isle, as our equivalent of Central Park in Manhattan.

Granted, Richmond's necklace of linear parks lacks Central Park's sweeping meadows and recreational offering of playing fields, pools and tennis courts. And it doesn't boast equestrian trails, formal gardens or an amphitheater. But Richmond's contiguous, downtown park land does offer fishing, bike trails and white-water rafting. And for those seeking solitude there are shady thickets of forest or carefully planted groves. History lovers can commune with historical and industrial ghosts whose spirits are channeled through fragments of factories, bridges, mill races or electric plants.

Most importantly, however, Brown's Island and Belle Isle boast what all great parks possess — the ability to embrace people from the widest swath of humanity, regardless of income, race or age, and make them feel at home together. The best parks allow individual visitors to know intuitively that they're welcome, that the park belongs especially to them for the time that they're there.

Often these parks are so majestic that they exude the message that "nobody's great" — and yet everybody is ennobled — when moving through so sublime a setting. In Central Park you feel especially small, for instance, when contemplating the jaw-dropping vistas of grand skyscrapers beyond the huge reservoir. In Richmond's downtown waterfront parks, the humbling experience occurs because of the powerful rush of the river, coupled with the sense of a deep historical narrative reaching back to when Native Americans hunted along the shores, and later to the 1600s when Europeans and Africans entered the picture. And our downtown skyline never looks more awesome than when viewed from the open spaces of Brown's Island.

Richmond's riverfront park spaces continue to be works in progress. And recently, something new was added. A modest-sized, but handsome footbridge that's accessible for the disabled now joins four other bridges that cross the Haxall Canal to connect the area near South Fifth Street with Brown's Island. And as you step from the bridge and onto the island, a slender and elegant piece of sculpture offers a welcome.

"The Mill," by Richmond sculptor and metal artist Bradley Robinson, is a slender vertical piece, 16 feet high, comprised of two slightly twisted forms of brushed aluminum. The extensions vaguely resemble a pair of propellers set on end. They seem to want to embrace, but that they don't creates a sense of tender tension. Considering the work's simplicity, it's powerful and surprisingly poetic. 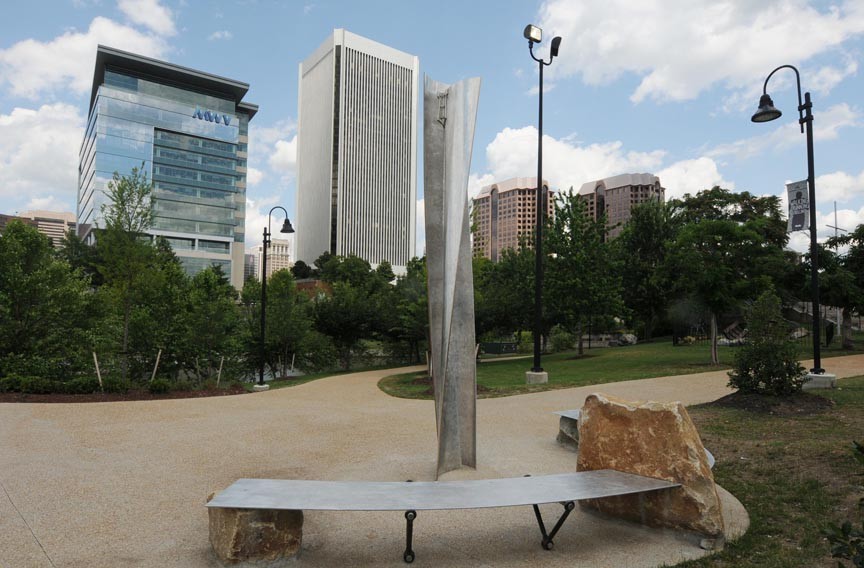 The sculpture's verticality also is an excellent counterbalance to the horizontality of the new bridge and indeed, Brown's Island itself.

But "The Mill" also serves as an object of urban design. The sculpture and an adjacent, gently curving arc of a bench (the seat is rendered in brushed aluminum and rests on granite boulders) are placed on direct axis with the new bridge to create a small and informal piazza. The ensemble provides a resting point and perhaps a meeting spot. "Meet me at the silver sculpture" has a nice ring to it.

The bridge itself is especially handsome because of its simplicity. The span's wooden platform is flat and supported by two curved metal arches that are embedded on the northern and southern banks of the canal into concrete pilings faced with huge granite blocks. Landscape architect Luigi Mignardi and Bob Mills of Commonwealth Architects were the designers, Whiting-Turner the contractor.

Great public spaces don't just happen without a savvy and determined client. It's therefore appropriate that this new bridge is dedicated to honor Brenton S. Halsey, a regional business leader, lover of water and civic visionary who long has been a guiding force behind Richmond's riverfront redevelopment. If Central Park had its guiding development lights — A. J. Downing, Calvert Vaux and Frederick Law Olmstead — Richmond is fortunate to have Halsey keeping a paternal watch over its waterfront park development as chairman of the Richmond Historic Riverfront Foundation. S