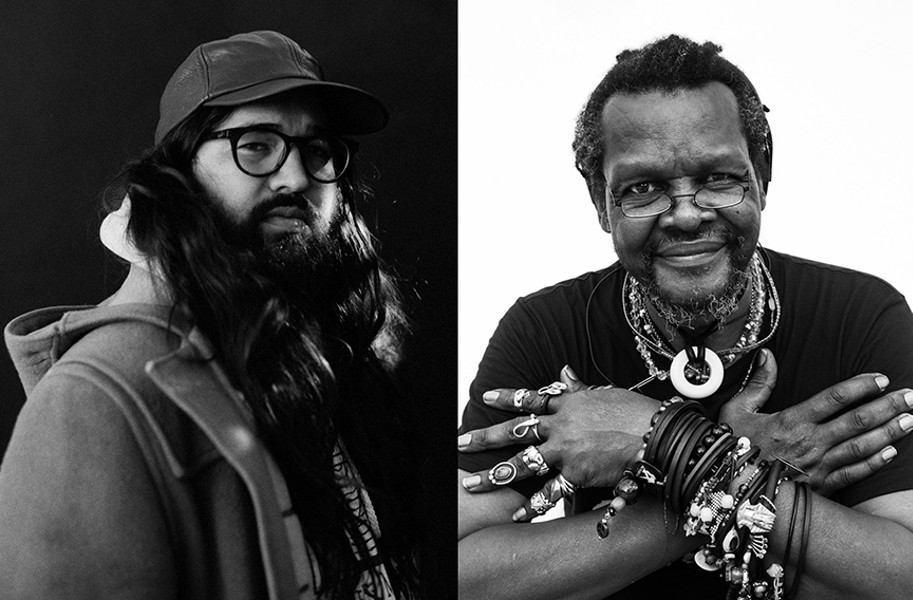 After a year in which time could feel alarmingly elastic, there’s an added measure of healing to music that models what it’s like to truly embrace the moment.


“Broken Mirror: A Selfie Reflection” brings together Richmond-based producer, arranger and Spacebomb founder Matthew E. White, and Lonnie Holley, the Alabama-born artist, singer and educator known most widely for evocative sculptures that have graced the White House Rose Garden and countless museums. Their five-track album is a lightning-in-a-bottle triumph, the product of two distinctive approaches to improvisation, a year's worth of patience, and a spark of inspiration that struck White while onstage at the Virginia Museum of Fine Arts.

“We played with Lonnie,” White says, “and it was like a light bulb.”

That 2019 set was the first time White had performed with Holley, though the kindred creators had already developed a bond, sharing a bill at the Broadberry in 2017 and sharing lunch in Richmond when Holley and his manager, Matt Arnett, traveled the East Coast to and from Holley’s home in Atlanta. Holley also made the cover art for White’s 2018 “No Future in Our Frontman” project.

When it comes to making music on the fly, Lonnie Holley is an original. Spontaneous interplay between instruments is rare enough, but Holley goes one extraordinary step further by improvising his lyrics. Every time. Each performance, whether onstage at a venue like the Broadberry or in the studio for an album like “Broken Mirror” -- is different, collapsing the distance between the creative impulse and the art that results.

“When something hits you, you gotta go with it,” Holley says. “You can’t prolong it.”

“He’s living on a different level of intuition,” White says.

“His whole life is a ritual of building up these ways of thinking to be so sharp and flexible,” White adds, “so when he has a moment to share them, he just shares them, and then they’re really, very powerful.”

It’s a technique with parallels in the world of visual art, where each brush stroke represents an immediate addition to the canvas. Holley knows that world well, having first gained notoriety for sculptures in which found objects and discarded scraps speak wrenching truths about our nation’s violent racial history, its consumer culture and Holley’s own personal and familial past. When we spoke, he compared his body of recorded work to “different pages of somebody’s writing that goes into the biblical.”

On “Broken Mirror,” words of warning about technology and planetary stewardship mix with expressions of compassion and encouragement, forming wide-angle snapshots of human nature that trace the connectedness between just about everything. “We’re moving so rapidly from point A to point Z,” Holley said when we talked about “I’m Not Tripping/Composition 8,” the album’s penultimate track. “I don’t have no time to be jiving, or just tripping. … I’m doing something with an intent – that we can actually see ourselves [as] a part of something much, much greater.”

Even before the event at the museum, White had been looking to revisit his own improvisatory roots. The winking title of his breakthrough 2012 album “Big Inner” signaled beginner status as an artist releasing music eponymously, but the former student of Virginia Commonwealth University’s jazz studies program had previously garnered acclaim as leader of Fight the Big Bull. White’s adventurous arranging earned that little big band invitations to the Kennedy Center and the Sydney Opera House.

In late 2018, amid work on his yet-to-be-released follow-up to 2015’s “Fresh Blood” LP, White booked time at Montrose Recording for a session designed around those techniques. “I needed to connect the dots a little bit, because I have such a huge love, and experience and skill set in another lane,” White says. “It felt like I was being, not dishonest with myself, but had an incomplete professional life, and artistic life, by not engaging in improvised music.”

White designed frameworks for instrumental companions to the songs he’d been recording, balancing space for spontaneity with elements of structure. The goal? Tempo-matched material that could be spliced into the original tunes, with inspiration from the composition via editing employed by producer Teo Macero on visionary Miles Davis albums like “Bitches Brew” and “On the Corner.”

“When you first hear that stuff, you just think it’s the band playing, and you don’t have the ears to hear the production, or to hear the loops, or to hear the form that’s insinuated by the tape edits. … It’s a really cool intersection of forethought and preparation and improvisation and all these things. That whole bag was my goal for this.”

While pieces of that session did make it onto White’s upcoming album, around 20 tracks of kinetic jazz sat unused until White, galvanized by the museum set, approached Lonnie Holley about singing over them.

“My thing when I’m listening to any music is that I want it to groove with what I’m doing,” Holley says. “If music is medicine, then I want to give it the best shot that I can give it.”

After a follow-up gig in Durham, North Carolina, a couple of months later, Holley and White convened at Soundpure Studio to sift through the shelved material. Holley moved efficiently, noting the tracks that sparked his interest.

“Sometimes you feel that you can go in somewhere,” Holley says, “and it’s already laid out for you. It’s already spiritually laid out. You just need to be in tune to hear it. That’s what it was with Matthew. It was already laid out, and it was ‘Boom. Bam. We did it.’”

White estimates that vocal tracking took just three hours. The result is vivid -- a brisk walk through an environment of sounds that call out to you, with Holley’s words leading you through avenues of thought with surprising intersections.

“We did three most valuable things,” Holley says referring to what listeners can expect. “We gave them some enjoyment, we gave them a way to hear how collaborators got together and respected the mother ship, which is planet Earth, and we also showed them how to respect ourselves as humanity all the way down to what our ancestors did.”

“Sometimes you just get an idea where one plus one equals 10,” White affirms. “You feel less like you’re creating it and more [like] you’re just transcribing it. You’re transcribing fate. You’re like, ‘OK, this is supposed to happen. Let me play my role.’ That’s what this whole thing felt like.”


Back to The Music Issue