How Richmond's programmers are taking the world of indie video games by storm.

While rain pelts against the windows, tension simmers inside a building two blocks north of the statue of Robert E. Lee on Monument Avenue.

It’s 8:36 on a Sunday night, and about a dozen people are staring intensely at their computer screens. The projects they’ve worked on for the past two days must be completed within the hour.

The contest is called Ludum Dare, and it drives computer programmers around the world to create video games out of thin air in 48 hours. Locally, competitors connect through RVA Game Jams, an indie video-game collective where mere mortals can play God.

These programmers make up their own rules, controlling space and time in their created worlds. Gravity, perspective, difficulty — these are just a few elements they must consider, and what they ultimately construct is limited only by their skill and imagination.

They’re gathered inside 804RVA, a shared co-working space at West Broad and Allen streets. At one table, Will Blanton is uploading his “Bedhogg,” a two-player pillow-fighting game. Nearby, Ruthie Edwards is building a website for her virtual re-imagining of the schoolyard game rock-paper-scissors. Behind a partition, Tyler Rhodes puts the final touches on a game in which players act as moss, greening rocks and cliffs by rolling over them. A few computers down, Zachary Helm is trying to add a high score page to a game where players fight each other using oversized trout as weapons.

For some, this gaming challenge is an avenue to instant riches. For others, it’s a creative outlet for artistic expression and exploration. And it could be both. But one thing is certain: From slapping friends with fish to impersonating moss, this isn’t your parents’ “Pong.”

As with anything carrying the label independent, the definition of an indie video game is up for debate. But generally it means that programmers are working outside the corporate structure to bring their projects to life.

A company such as Electronic Arts might throw millions of dollars and hundreds of designers at the next incarnation of the “Madden NFL” franchise, while an indie video game could have only one or two people working together toward its completion.

The games can be as commercially driven or artistically motivated as their creators desire, and the movement has led to an explosion of inventive options. Fighting an opponent with a large fish is just the tip of the iceberg — programmers can create personal narratives, explore issues of mental illness, or simply emulate blockbuster shoot-’em-ups like the “Grand Theft Auto” series.

RVA Game Jams has sprung from this movement, turning what’s often a solitary undertaking into a community. Founded by Will Blanton and Lauren Vincelli in 2012, the group meets every couple of weeks to discuss video games and programming techniques. It also holds events for programmers to create games together in competition, such as Ludum Dare.

Vincelli and Blanton’s road to friendship is an unlikely one, beginning with their meeting at a dance in grade school.

“Will was my fifth-grade boyfriend,” says Vincelli, 31. “We had so many wild nights of drinking chocolate milk and not holding hands.”

Between attending different schools and the onset of puberty they drifted apart, only to reconnect as adults through the magic of another mutual love: karaoke.

Closer than Mario and Luigi, the duo once won a contest by making an exact replica of samurai armor from Little Caesars delivery boxes. Donned by Blanton, photos of the outfit won them a year’s supply of pizza and made them the darlings of Buzzfeed.

By the time they met again as adults, Blanton was programming his own video games. Vincelli, it’s fair to say, has an obsession with pizza — she’s written pizza blogs, decorates her apartment with knitted pizza slices and has a large tabby cat named Dr. Yummy Pizza. She also turned that passion into a pizza-themed video game for a college class.

Soon they founded RVA Game Jams and became the de facto gurus of Richmond’s indie video-game scene. The collective was recently named a finalist in the RVA Creativity Awards, sponsored by the local nonprofit creativity hub C3 — which will announce its winners Thursday.

“It wasn’t until several years ago that I started making games, but it’s the thing that I’ve wanted to do my entire life,” says Blanton, 30, who originally attended school for illustration and contemplated a career as a professional musician. “Out of all the creative things I’ve done in my life, programming actually seems like the most creative process I’ve experienced.” 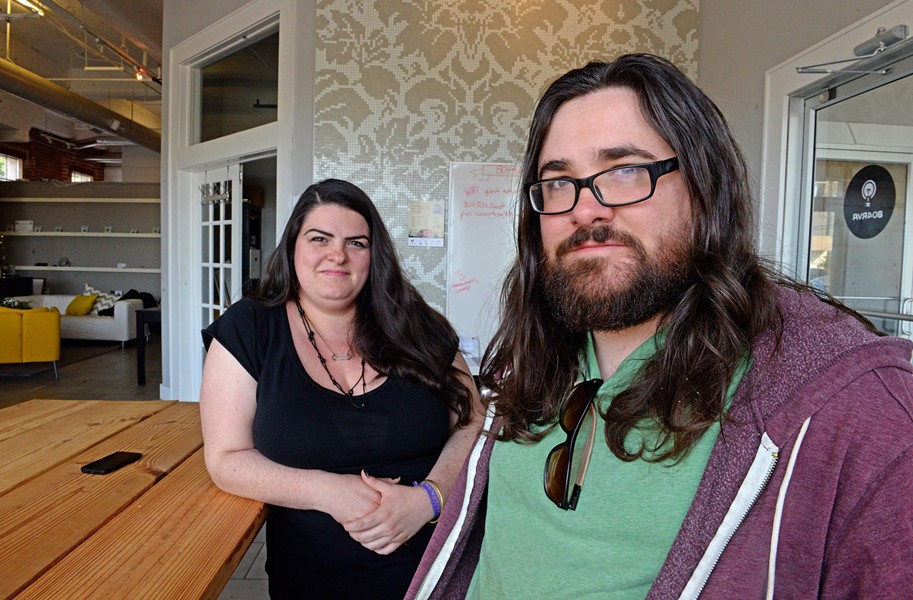 During a Ludum Dare competition last fall, Blanton created the prototype for “Redshift Blueshift,” a game he describes as “’Pong’ with spaceships.” Out of nearly 1,500 entries to the international competition, he placed sixth. After that Ludum Dare, Blanton expanded “Redshift” into a full game, which was selected to be featured in last year’s MagFest, an annual gaming festival near Washington.

One outlet for indie developers to sell their games is Steam, an Internet platform for the PC community that essentially functions as an iTunes for gamers. Though it sells corporate games, the platform also sells independent games that receive approval from the Steam community. The approval process can take anywhere from a few months to a year. “Redshift Blueshift” got the green light from Steam in 11 days.

“Right now I’m trying to polish it up and make a living on it,” says Blanton, who brought in his friend Alan McCosh to help develop the complete game. “We’re just adding feature after feature and focusing on what doesn’t work.”

Another local developer hoping to crash the gates is Momin Khan, a 23-year-old who got into video game programming as a third-year student at the University of Virginia. A Northern Virginia native, Khan says he was so focused on finishing his game “Retroverse” during his final year at U.Va. that he neglected to search for a job.

But after graduation Khan landed at SRRN, pronounced “cern,” Games in Midlothian, and began developing games for clients, including one called “Stormwater Sentries” for the Chesapeake Bay Alliance. It shows players how to avoid polluting nearby waterways.

After SRRN was acquired by the Timmons Group to focus more on Web development, Khan began a gaming company on the side. Root76 is composed of five people, and the biggest game they’ve worked on is “Clash Cup Turbo,” in which dueling players attempt to knock a puck into the opponent’s goal. The game was inspired partly by Khan’s desire to create a game that anyone could pick up and immediately understand.

Khan showcased the game earlier this year at IndieCade East in New York, he says, attracting the attention of Microsoft and Sony. He’s now working with both companies to upload the game to their platforms.

“We’re really fortunate to live in this time because it is as simple as finding someone who likes your game and getting them to vouch for you,” Khan says, “whereas in the past you needed a lot of connections, a lot of money.”