Arby's and the Apocalypse 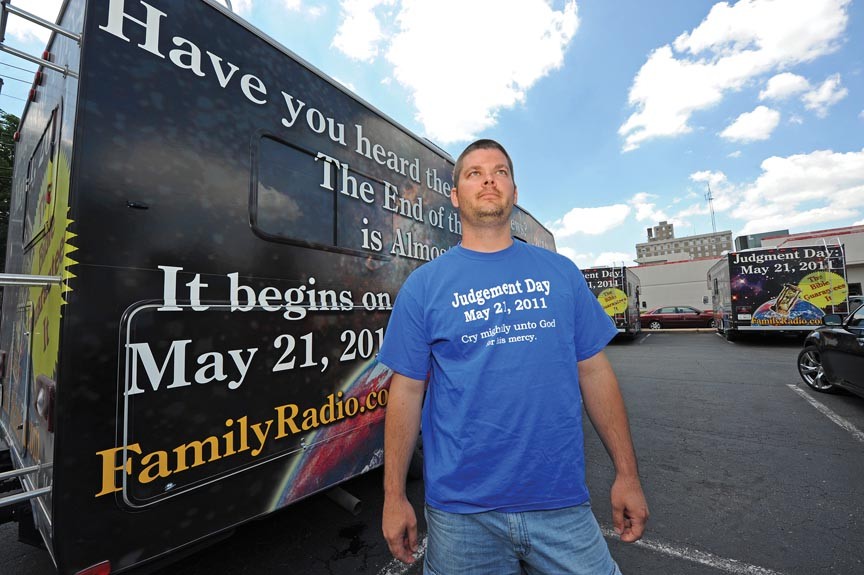 Yea, I was driving on West Broad Street Monday afternoon.

And they did pull into the Arby's, for it was lunchtime.

This apocalyptic caravan is one of four traveling the United States. Spurred on by Harold Camping, founder of the Family Radio network, they and other Christian believers have been spreading the word through tracts, signs and billboards that the end of the world is nigh.

"The 21st is gonna be when God closes the door of salvation for mankind," explains Adam Larsen, a green-eyed Kansan who left his home in December to travel with this group. He's pretty excited. "I'm looking forward to it. It'll be an awesome day for true believers. A very fearful day for everybody."

The caravan arrived in Richmond on May 8 from Washington and stayed two days. "So far, so good," Larsen says of Richmond. "It seems to be friendlier than D.C., anyway. People down there, they'll tell you what's on their mind."

Next stop: New York City. On the 21st, they'll be in Boston. The saved, both living and dead, will be "caught up in the air" and taken to heaven, Larsen says. Everyone else will be stuck here on earth, where a massive earthquake will begin at 6 p.m. on the international date line in the Pacific Ocean and ripple around the world. "It'll make what happened in Japan look like a Sunday school picnic," Larsen says levelly.

And what if nothing happens on the 21st? "Everyone wants to ask us that question," he says. But it's a fact, he says. It comes straight from God's mouth.

"We know that we're short on time," Larsen says. "We want to spend time in prayer, asking that God opens the eyes of our friends and our family, as well as just everyday people that we come into contact with. Including reporters." He chuckles.

Larsen goes in to get a salad and a soda before heading out to Virginia Commonwealth University.

And I think: I'll be damned if I'll eat Arby's for the 13th-to-last lunch of my life.

And yea, I go to Sally Bell's Kitchen.