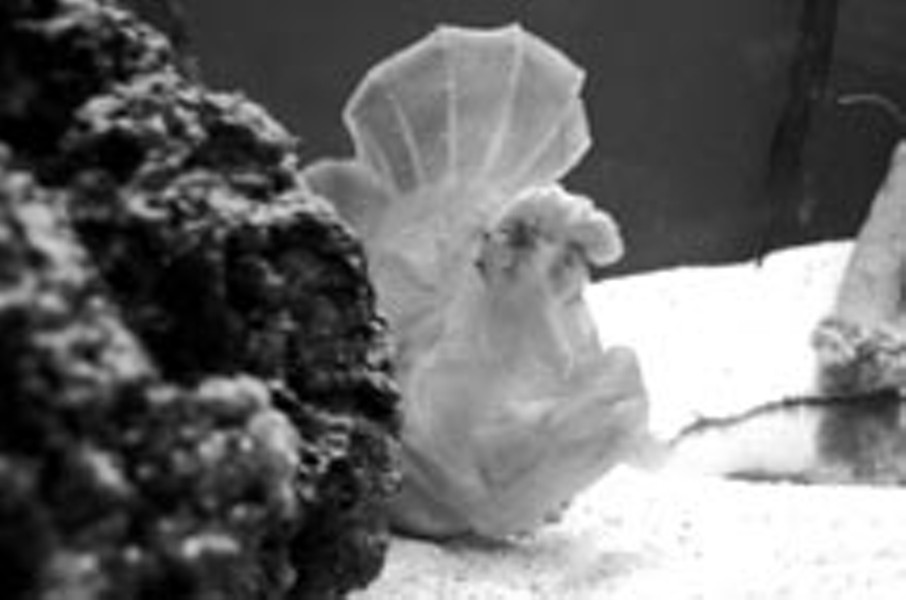 Farrell's theory for the demand is a therapeutic one. "As people get more stressed, they acquire aquariums," he says.

Finding the Rhinopias was as much a coup as a quest, Wingard says. The 5-inch long pinkish fish is the rarest and most expensive the aquarium has had. "He'll be gone in less than a week," he predicts.

The fish is funky-looking. "It's supposed to simulate being a leaf," Wingard explains. It rarely swims and moves instead by scooching along the bottom on its pectoral and pelvic fins. Its eyes are translucent and resemble beads of tapioca. Its face appears humanlike with a distinctive nose, chin, and eyebrows, too.

Another tank holds what Wingard and Farrell call the runner-up fish. It's a baby bumblebee grouper, black with yellow stripes, from Australia. It'll grow from its current foot-long size to 9 feet and weigh as much as 1,200 pounds. It costs $350.

Still, the most popular fish in the house are the Nemos. One tank is full of them. If any fish is capable of appearing cute, it's the orange-and-black striped clown fish. And they won't break the bank at $24.99 apiece.

Already Farrell and Wingard are scouting for their next piscine prize — one rarer than the Rhinopias. "We're looking for a Japanese moray dragon," Wingard says of the orange deep-water eel that could fetch up to $3,000. For now, the scorpion fish holds its charm. "It's a real thrill," Farrell declares, "like the Hope diamond." — Brandon Walters