Inside the world of tribute bands with a full-time Guns N' Roses homage. 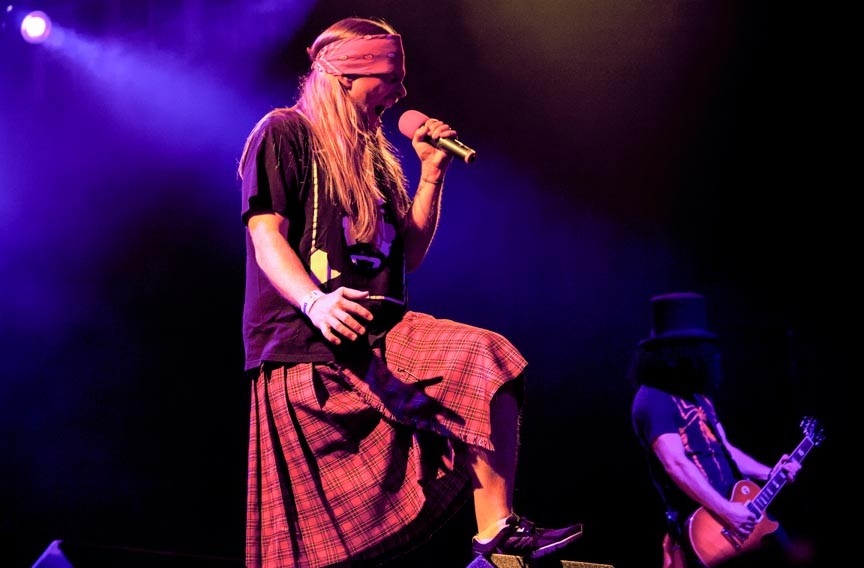 In his high-school days as "a skinny white boy" who played in bands and had long red hair, Chad Atkins swiped Axl Rose's look pretty heavily. Even though he didn't want to admit to that pilfering at the time, his style jacking got to the point that people nicknamed him Axl. So years later, when a friend was tinkering with the idea of putting together a Guns N' Roses tribute band, he offered Atkins the Axl Rose spot. Atkins turned his buddy down at first, but after some thought he figured the project might worth a shot for the sake of playing make-believe.

"I can pretend to be this guy that I looked up to for all that time and get away with it," says the 30-something, whose pipes do a killer Axl. "I picked up a lot of his style 'cause I liked the band so much as a kid, but you could never really [be him]. You're a poser. You're just pretending to be him in your own original band, so you're always trying to fight that. Well, you don't have to fight that in a tribute band. You just do it and have fun with it."

The result of the friend's idea was Appetite for Destruction, a tribute band that started in 2001. Named after the original band's pivotal 1987 debut, which contained "Sweet Child o' Mine" and "Welcome to the Jungle," the group also includes a Slash (Bill Spears), an Izzy Stradlin (Chris Clark), a Duff McKagan (Scott Seville) and a Steven Adler (Dee Williams). The friend is gone.

Led by the real Axl, Guns N' Roses still tours. But Appetite for Destruction, born in Raleigh, N.C., focuses on recreating the band's vintage form — one associated with cultural influence and rebellious rock 'n' roll, instead of in-band fighting, tardy concert appearances and the absurd bloat of the album "Chinese Democracy."

Although Appetite for Destruction has tried its hand at "Chinese Democracy" covers before, Atkins notes that the public is much more interested in the band circa 1987-'91. "They were cool, man. They were just a good band. It was raw," Atkins says. "[The band] came out in a time when there was a lot of really cheesy, cheesy rock out there. They weren't quite so makeup[-heavy] and hair-metal-ly. I mean, people may kind of see that now, but back then, they weren't classified like that."

Based on the substantial number of tribute bands out there, the business of paying homage looks like a fruitful one. Straightforward tributes have been dedicated to the Beatles (Britain's Finest), Sublime (Badfish), Daft Punk (One More Time) and the Smiths (the Smiths Indeed). There also are gimmicky tribute bands, such as Lez Zeppelin (an all-woman Zeppelin takeoff) and Misfats (a cadre of overweight dudes doing fat-guy-themed Misfits parodies). Guns N' Roses alone has boasted loads of cover bands, including Paradise City, Guns 4 Roses and November Rain.

Atkins emphasizes that going the whole hog with mimicking both sound and look is important when imitating Guns N' Roses or Kiss versus, say, Creedence Clearwater Revival. His group plays up the original's signature visuals for the sake of show. As Axl, Atkins has donned a lot of kilts and red bandanas, as well as a Charles Manson shirt — all so the band can duplicate the most lively characteristics of the real deal. "Slash didn't wear a top hat a lot," he says, "but that's the first thing you think of" when you think of him. He compares what he does to portraying someone in a play.

As Paradise City vocalist Randy Trask pointed out in a 2002 New York Times article about Trask's GNR tribute, there's one key caveat to remember when being in a tribute band: Your fans aren't really your fans, but rather fans of the band you're imitating. Atkins, who brings up the many compliments his group has received, understands the upsides and downsides of this arrangement.

"That's just how it is," he says. "Nothing wrong with that, as long as they enjoy the show." S