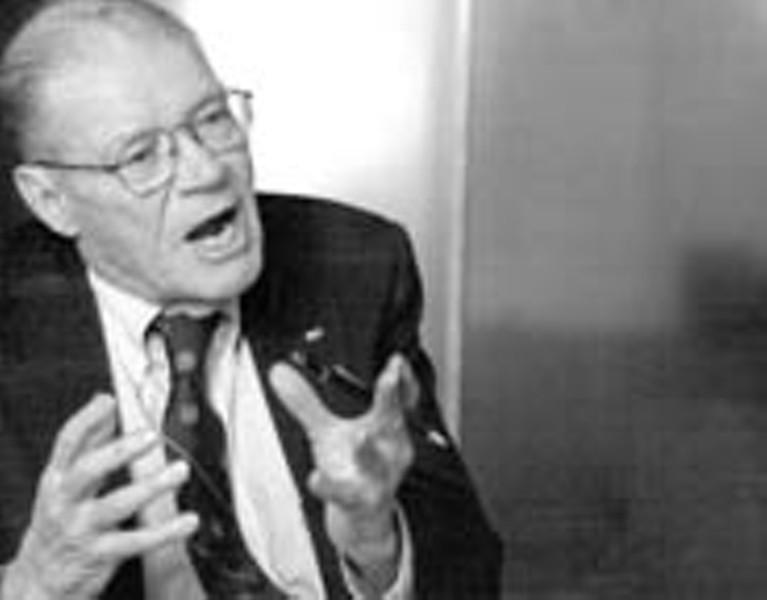 By the time LBJ ousted him in 1968, he was being denounced by many as a warmonger, dictator, murderer and fascist, in spite of the fact that he sometimes resisted the policy of escalation that would shortly lose Johnson the presidency. Now in his 80s, in recent years he has mounted an effort to rehabilitate his reputation by airing his view that the Vietnam War was a mistake.

Whatever one may think of his attempt to mold what will be said of him in the history books, it is probably the reason he agreed to let controversial and innovative documentary filmmaker Errol Morris (“The Thin Blue Line,” “Vernon, Florida”) build a movie entirely around his recollections. The result is an astonishing, mesmerizing portrait not only of one man, but also of what commonly used to be called “the American century.”

“The Fog of War: Eleven Lessons from the Life of Robert S. McNamara” is a great and disturbing film. It begins in the middle of the action, as McNamara takes us through the harrowing weeks of the Cuban Missile Crisis. One might expect McNamara, the embodiment of the best and the brightest assembled in Washington by Kennedy, to glory in the brilliant strategizing that brought the Russians to heel. His conclusion, however, is that we avoided nuclear devastation because “we lucked out.” The assessment is typical of the sobering revelations he has to offer.

Except for a few questions launched by the director off-screen, McNamara does all the talking. In less skilled hands than Morris’, this might seem a recipe for cinematic disaster, like being cornered at Thanksgiving by an aging relative who has unaccountably chosen to tell you his life story. “The Fog of War,” however, is a visually stunning achievement, intercutting shots of McNamara today with quirkily chosen historical footage, along with disorienting close-ups of graphs, charts, memoranda and maps, mute witnesses to the bureaucratic labor behind state-administered carnage. Instead of seating McNamara before a well-stocked bookcase, Morris places him in front of layer after layer of opaque, eerily backlit plastic paneling. We seem to be in a post-apocalyptic bunker, or a subterranean holding cell in which a deposed king is subjected to endless debriefing.

Rather than proceeding in a strictly chronological way, the film is organized around a series of McNamara’s “lessons” — some disarmingly straightforward (“Get the data”), others jarring (“Rationality will not save us”). What emerges is not a conventional narrative, but rather a kind of dreamscape revealing the obsessions, sentiments, and ideals that propelled America into conflict in every corner of the globe. We follow McNamara from his days as the youngest professor at Harvard, to his stint as a military analyst in the European and Pacific theaters, to his tenure at Ford (where he championed outfitting all cars with seatbelts), and finally to the Pentagon.

Well into the movie Morris says, “At some point we have to approach Vietnam.” McNamara stiffens, as if he’s steeling himself for the moment when, after much unwinding, the bandage concealing a dreadful wound must finally be stripped away. For Morris, who protested the war in the 1960s, this is clearly the crux of the matter, but he doesn’t let his passion get in the way of his craft. And thanks to LBJ’s phone-tapping system, we’re offered conversations between the president and McNamara that capture the charged sensibility of the era as well as any novel could. Speaking of the North Vietnamese, Johnson expresses his desire to “whoop the hell out of ‘em.” McNamara, a 1960s technocrat to his fingertips, starchily replies, “I’ll try to bring something back that will meet that objective.”

Morris has said that making this film changed his mind about McNamara (although not about the war), but what he’s put on the screen is neither an apology for nor a condemnation of his subject. It’s a hypnotically riveting meditation on intractable problems that, as Morris said in his Oscar acceptance speech, are crucially relevant today. ***** S