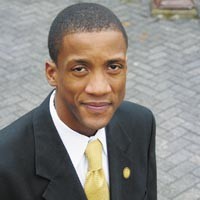 When Antione Green was in his early teens, his father left and his mother went to back to school. Green was left to fend for his two younger sisters while his mother studied to become a nurse. That's when he knew.

“I had to grow up a little bit faster than maybe other young people my age,” he says. “I knew that one day I wanted to have a role, be able to have an impact.”

In other words, become a politician. Green joined the Richmond Crusade for Voters when he was 19. A few years later, at 24, he ran for elected office, losing to Lloyd Jackson for a seat on the Henrico County School Board.

The loss, however, only whetted his appetite. He became a registered Democrat and took a job as Delegate Joe Morrissey's legislative aide. Next year he'll graduate from Virginia Commonwealth University with a degree in governmental relations. All the while he's been working with single mothers at SEC Solutions, which provides job training to women transitioning off government assistance.

Green recently became president of the Crusade, taking a number of high-profile stands on issues related to Richmond schools — the Crusade's original mission — as well as city politics. He's pushed the decades-old organization back into the city political spotlight and added to the dialogue. And he was recently appointed to the board of the city's first proposed charter school, the Patrick Henry School of Science and Arts.

“My next step is to run for office in the city,” Green says. “Right now, I'm in [Delegate] Frank Hall's district.”