Antipop Consortium at the Canal Club 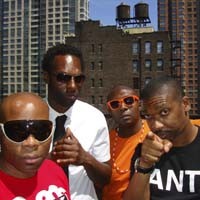 During the late '90s and early 2000s, rappers Beans, High Priest and M. Sayyid had become quite the fixture in the underground hip-hop scene with their forward-thinking approach to their beat-driven genre. With the help of producer E. Blaize, the unofficial quartet released several full-length records that highlighted tongue-tripping lyrics of intelligent puns and poetry. What really separated them, however, was the group's abstract blend of traditional beats and experimental electronica. Using glitchy, science fiction-inspired loops, effects and samples, Antipop Consortium's fringed attempt to outsmart commercial rap brought with it a great deal of critical praise until its disbanding in 2002. Reuniting in 2007, the trio has returned with perhaps its best work, “Fluorescent Black.” On the road in support of its release, Antipop Consortium performs at the Canal Club on Tuesday, Oct. 13, at 8 p.m. $10-$13. 643-2582. — Mike Hilleary