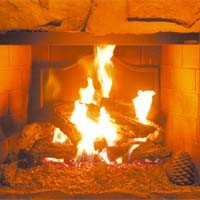 Heating oil has already hit $3 a gallon this season, and the cost of electricity is expected to increase by as much as 75 percent in the coming years. Even natural gas is far from the cheap alternative it was less than five years ago.

Ben Franklin had a plan back in 1742 when he came up with his Franklin stove. Today, it's an antique option that has some very modern benefits.

Forced air circulation, more efficient burning processes, lower smoke emissions and a variety of fuel options are proof that the old potbelly stove has evolved throughout the years. The new breed burns fuel -- be it wood, propane or newer pressed-fiber pellets — at 70 to 90 percent efficiency. And then there's Europe's answer: zoned heating with small gas or electric stoves.

Stoves and zoned heat options could well be the next big thing for consumers looking for economical heating alternatives, says Karen Duke, owner of Victorian Fireplace Shop on Broad Street. Duke is a proponent of doing as the Europeans do: "They don't believe in central heating. They think it's a waste." Using a stove to create zoned heat, Duke says, "really can cut your heating bills by 75 or 80 percent. It's something people here don't think about." Creating a zone is as easy as closing a few doors to conserve the stove-generated heat.

Installing any stove, whether wood, gas or pellet, requires burning some money upfront. Startup costs for wood, propane or pellet options run between the high $2,000s to the low $4,000s, but these costs are oftentimes made up quickly in savings when switching from conventional sources of heat.

Once a stove is installed, there's obviously the cost to keep it burning, says Ryan Smith, owner of Studley Stove & Hearth in Hanover County, and each fuel has its pluses and minuses.

"The thing about wood stoves, if you have your own wood to split, you're going to save money with the wood," Smith says, but don't expect to save time. Assuming you've got an acre or two of land full of trees ready for harvesting, you've got to cut, haul and stack. Then you've got to clean ash out of the firebox, a messy job.

A propane stove, by comparison, is clean and no hassle other than having your flue cleaned once a year. "You've just got to turn on a switch," says Smith. "No mess." But propane gas is not nearly as cost-effective as wood. And there's a little matter of efficiency versus effectiveness. "Gas is a good heat, but … wood heat gets to the bones," Smith says.

Pellet stoves, by Smith's description, are the Toyota Prius of the stove world. But they're far less cost-effective for the consumer than their automotive counterparts. Pellets made from recycled agricultural waste — husks from corn and leftover farm chaff compressed into what look like hamster food — are fed into a chamber that slowly feeds the fire via an electric conveyor system.

Among benefits of owning a pellet stove, Smith says, is that you can purchase the stove and pellets tax-free until July 2012. Another plus, Smith says, is "it's the closest you're going to get to wood heat, but it's a lot easier than wood stoves."

So what's the downside? Pellet stoves become far less attractive when those January cold snaps bring an ice storm with them. When the power goes out, so does the stove.

But the point of choosing an alternative heat source for your home really isn't to avoid getting bested by ice storms; it's to beat Virginia Power at the meter. And installing a stove — wood, propane or pellet — and shutting a door or two may help you do just that.