At Plant Bar RVA, you can enjoy a drink and plant workshop in a storefront lush with greenery. 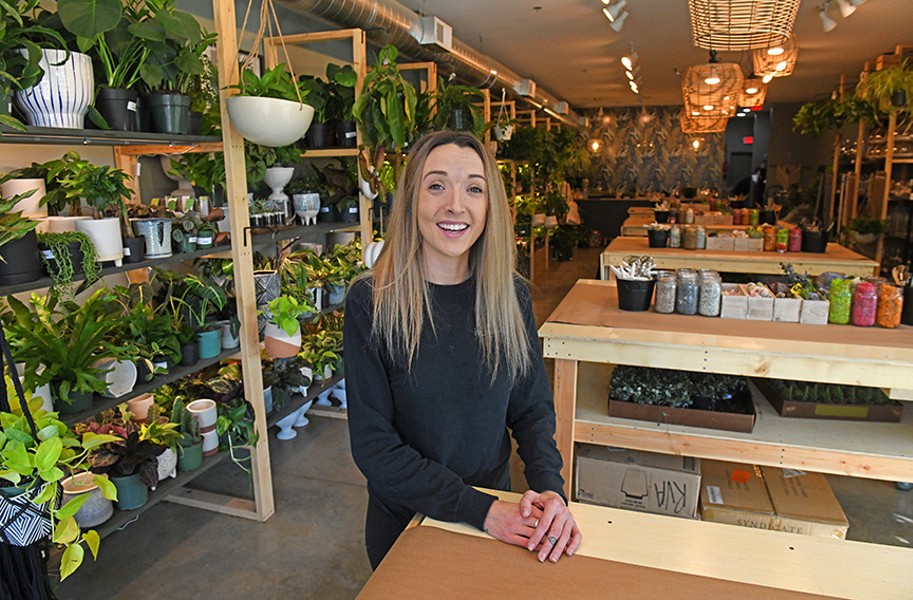 Scott Elmquist Leigh Mielkey, store manager for Plant Bar RVA, emphasizes that the staff is there to help people get creative with plants.

Hippies worth their bellbottoms and love beads had a soft spot for houseplants in the ’70s. Living with greenery was as essential as having a flokati rug, beaded doorway curtains and Neil Young’s “After the Gold Rush” album. Don’t forget, this was the decade that began with the world’s first Earth Day in 1970, an event that kicked off a groundswell of passion for all things green.

Prayer plants, spider plants and rubber plants, not to mention terrariums and macramé plant holders, became de rigueur in dorm rooms, apartments and group houses, a trend that came to a screeching halt when the sleek and contemporary ’80s were ushered in. But after a few decades on the back burner, houseplants have been rediscovered by millennials, conveniently at a time when the number of varieties within each plant category has exploded.

To the aid of first-time plant parents -- as well as people who’ve let their plant-care skills wilt over the years -- comes Plant Bar RVA, a storefront lush with greenery and enthusiastic, knowledgeable staff. Leaving Cary Street and walking into Plant Bar feels like entering a different world. With so much sumptuous plant life, there’s an enveloping sense of earthy welcome. If the plants have recently been watered, there’s even a tropical vibe.

Five worktables, each with extensions to accommodate additional people, are positioned down the center of the store. On them are all the extras that go into making a miniature garden world: lotus pods, seashells, dried flowers, driftwood, miniature pine cones, stones and colorful reindeer moss.

As long ago as 1973, New York Magazine was reporting on “New Plant Shops in Town,” with shouts-out to ferns, philodendrons, aloe plants and terrariums, all of which you’ll find at Plant Bar along with scores of other tropical houseplants and modern ceramic pots.

The business was founded in Virginia Beach by mother-daughter team Elizabeth and Bailey Ryan and originally sold air plants online. But when Bailey began doing workshops, the need for a storefront became apparent. The Ryans re-branded and moved to the oceanfront, opening on Black Friday 2018. The Richmond store followed on Black Friday 2019 and has already proven itself to be something Richmond wanted.

Part of the reason for that may be the formula. Whether guests come in as walk-ins or for a workshop, they’re offered a choice of wine, cider or beer. Glass in hand, they choose a container and, with guidance, plants based on how much light their room has. The staff then takes them through the process before cutting participants loose to sip and create, with staff nearby to assist. A second glass is also part of the deal.

Evening workshops are held Thursdays through Saturdays after the store closes and are for ages 16 and older.

“We get baby showers, bachelorette parties, work groups, holiday gatherings and people with company in from out of town,” says store manager Leigh Mielkey. “For 20 or more people, we do a private event and close the store.” Most classes sell out, so it’s a good idea to check out its events calendar on Facebook or Instagram and reserve early.

In addition to specific terrarium workshops – such as for fairy garden terrariums and carnivorous terrariums – customers can create their own terrariums at any time during business hours with prices starting at $20, which includes all materials and two drinks. Fair warning: You must show up at least an hour before closing time to start a project. And for those who recall the tiny openings on terrariums in the ’70s and the long, miniature tools required to garden them, the good news is that 21st century terrariums are wide enough to accommodate hands.

Mielkey emphasizes that for those who don’t consider themselves creative, the staff is nearby to assist and guide.

“Although it’s really hard to make these not pretty,” she laughs. “But it’s also very therapeutic and a good way to unwind, especially when free wine is involved.”

For those only in the market for houseplants, Plant Bar sends customers home with care instructions and offers a wide array, including cactuses and succulents. But if potting isn’t your thing, staffers are happy to repot any plant you buy into one of their containers. Variety is the name of the game with their container inventory, which includes a succulent flight -- a wooden tray with three glass containers, for which you pick the varieties --cylindrical terrariums for jellyfish gardens and some with leather straps for hanging.

Store number three is already in the works in Charlotte, an indicator perhaps that all the houseplant world needed for resurgence was a couple of drinks. Owner Bailey Ryan is quick to admit, “the business has taken off much faster than we expected.”