Urban Views Weekly was created to celebrate black Richmond. So why is it so secretive? 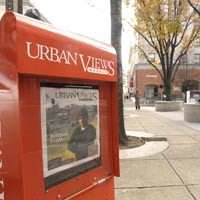 The bright orange boxes started popping up around the city this summer. While the national newspaper industry meandered in the gutter, losing readership, subscribers and ad revenue, Richmond was blessed with a new publication: Urban Views Weekly, a local tabloid targeting black readers.

In a majority black city with an established black newspaper, the Richmond Free Press, the arrival of Urban Views has been a study in contrasts. It targets Richmond's black urban community, but has its offices in a Henrico County office park. The idea for the newspaper was quietly hatched at Media General, owner of the Richmond Times-Dispatch — not at its downtown offices, but at its printing plant in Hanover County.

Yet no one associated with the newspaper — including its publisher, editor and Media General officials — wants to talk about it.

“I'm just trying to get my little company up and running,” says Ervin B. Clarke, Urban Views' publisher, who says he'd be willing to offer further details about his newspaper in about a year.

Clarke, the former general sales manager for The Richmond Voice newspaper in Richmond, distributes the papers himself every week. But sources say he gets plenty of help.

The idea for the paper first emerged in a Media General brainstorming session with print-shop workers in Hanover. Sources close to the original proposal say the credit goes to press worker Leroy Wilkens Jr., who confirms that he first suggested an idea for a newspaper aimed at African-Americans called Urban Lifestyles in a meeting with his superiors.

It's unclear what happened next. Although some sources say the idea started at Media General, Clarke says that he founded the paper. He declines to elaborate. “Absolutely, I started it,” he tells Style by phone. Then he hangs up.

Media General isn't claiming an ownership stake. “We only print the newspaper,” Media General spokesman Ray Kozakewicz says. “We don't talk about our customers, or our innovation ideas.”

According to State Corporation Commission records, Clarke is the registered agent of Urban Views Weekly, LLC, which was created in September 2007.

It's difficult to discern who controls the paper's Web domain, urbanviewsweekly.com. While most newspaper's domain names are registered by their publishers — for example, timesdispatch.com is registered to Media General Communications — Urban Views' domain name is privately registered with Arizona-based Domains By Proxy Inc., which keeps the ownership secret.

Urban Views is also atypical when it comes to covering Richmond's black community. According to its Web site, the paper “celebrates and explores the lives, work, celebrations, and leisure of the African American community of Richmond.” Early issues included a review of a Brandermill restaurant, an interview with the very nonurban comedian Kevin Nealon and a recent cover story on the Urbana Oyster Festival.

Hazel Trice Edney, editor-in-chief of the National Newspaper Publishers Association news service and Blackpressusa.com, and a former reporter for the Richmond Free Press, says Urban Views appears to be part of a new rash of so-called black newspapers owned or controlled by white money.
“They have also been established as stealth attempts to undermine Black progress,” Edney writes in an e-mail. “But simply put, the fruit willAÿusually look like the root. Authentic Black Press will invariably reflect the mission upon which the institution was founded 181 years ago — to plead the ‘cause’ of freedom, justice and equality for black people. Anything short of that mission and purpose naturally raises suspicions.”

Waterfield seems open about her life, writing on her Eve in Hand site: “I hope you find something that surprises you, makes you think and laugh. I hope you get super turned on.” But she declines to discuss her job at Urban Views, or the newspaper's mission in general.

Ginger Stanley, executive director of the Virginia Press Association, says it's unusual for the editor of an upstart newspaper to be so evasive. “I've never heard of one that wasn't willing to talk,” she says. “Usually they're more than happy. They want the publicity — especially start-up publications.”
Journalism isn't just any business, Stanley says: “I believe that newspapers in general adhere to the doctrine that information is open to the public. If you are a publication for the people, you would want to expand upon and celebrate the fact you are in business and what your goals are.”

Boone had a falling out with Ukrop's more than a year ago and discontinued distribution of the Free Press at the grocery chain's locations. “[Ukrop's and Media General] are very close-connected,” Boone says, adding that Jim Ukrop “has been the foremost apologist for the Times-Dispatch.”

Ukrop, who is no longer involved in daily operations of the grocery chain, says he is not an investor in Urban Views Weekly and that he met its publisher for the first time recently. He referred questions about the newspaper's relationship with the grocery chain to Ukrop's president and chief executive, Bobby Ukrop, who didn't return phone calls by press time.

Urban Views has helped rekindle the feud between Jim Ukrop and Boone, at least. Boone recently sent a letter to Ukrop congratulating the chain for carrying Urban Views. “We're equating the paper with the Ukrops' standard of quality,” Boone says. “We're saying congratulations for the hypocrisy.” S