Local experts attribute some of the increase to social media presence. 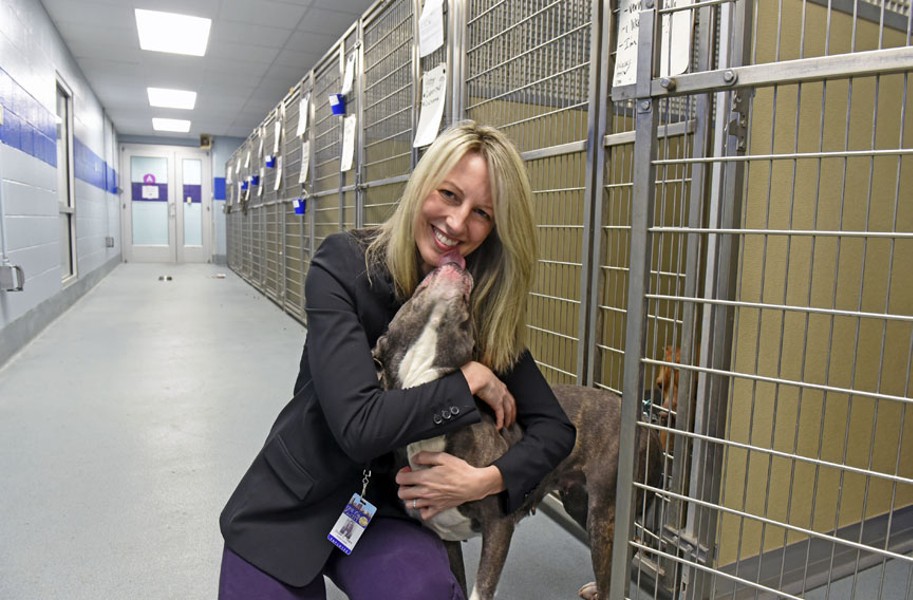 Cricket, a pit bull mix, was 15 pounds underweight when she was brought to Richmond Animal Care and Control as a stray. Found wandering an alley on Jan. 18, her ribs and spine were visible through the tan skin on her tiny frame. For the next few days she growled and whined and would not leave her bed.

It's a situation that has become common over the last year as the number of dogs that come in injured or malnourished significantly increased from 2016 to 2017.

"Particularly in January, we have seen a lot of starving animals," on-site veterinarian Alice Ulrichs says. "Several puppies, which is pretty unusual for us, coming in, by themselves, severely emaciated. We have no history on them, we don't know where they've come from, we don't have anyone to charge. Which is too bad because those are cases we do pursue."

Any of the 21 employees who work at animal control can tell multiple stories of severe cases from last year, but no one seems able to identify a direct cause for the increase.

Christie Chipps Peters, who has worked in animal welfare for 12 years and has been the director of RACC for the past five, says 2017 was the worst year, by far, she has seen.

"Last year was sort of like the gloves came off," Peters says. "Maybe we had had a dog shot before, but it wasn't like this. It's like commonplace now sadly, that it's happening again and again and again. We had the puppy that was in a plastic bag in a suitcase in the river. Really some just super egregious cruelty cases that we haven't experienced before."

Ulrichs used to see a gunshot case once every few years, she says, but within the last six months she has already seen two or three. "I think it's just an overall increase in crime and the anger level is just increasing to a capacity to where animals aren't immune," Peters says.

Leinberger says that there is no doubt that reporting has increased and attributed this to RACC's social media presence. Since 2013, the number of Facebook likes for the page has grown from 901 to more than 40,000.

"Our social media presence has just sky-rocketed," Leinberger says. "As a result, the public is more aware of who we are. …They see the things we do, and they become a part of it." The increased reporting has allowed animal control to educate the public and intervene in more cases before they turn into severe cruelty or neglect.

No leads have developed in the killing of the puppy in the suitcase, and the offense is coming up on its 1-year statute of limitations. However, a fatal dog shooting that took place in the same month has a suspect going to trial in March.

Animal abuse appears to be on more than just the city agency's radar, with multiple bills relating to animal rights being introduced in the General Assembly. One of the bills introduced in the state Senate would require the establishment of an animal cruelty conviction list, which would include the names of people convicted of certain felony animal cruelty offenses.

After six days at RACC, and 20 minutes of positive reinforcement from intake coordinator Brent Carson, Cricket allowed him to slip the lead around her neck and take her for a short walk through the facility. Along with gaining trust, Cricket gained about 5 pounds in her first week at the center.

While Ulrichs works to get the animals physically healthy enough to be adoptable, behaviorist Mollie Norville works with the dogs to ensure that it is safe to return them to the public. Norville spends nine hours a week running behavioral assessments on dogs that are new to the shelter, or reassessing dogs that either scored poorly on their initial tests or have been in the shelter for a few months, to ensure they have not regressed.

On Cricket's initial assessment she was too nervous to be tested with food or toys, and scored on the more aggressive side for handling and dog-on-dog interaction. But as her trust with people grew, her nervous behavior began to subside.

Though Cricket is still young and full of puppy energy, after 11 days at the shelter, she left her crate with little hesitation, walked on a leash, explored confidently, and even spent time lying at Norville's feet. Cricket is currently being fostered by a staff member but has passed all tests and is ready to be adopted.

"If you see something, say something," Peters says. S

If you have any questions, or possible tips about an animal cruelty case, RACC can be reached during business hours at 646-5573, and after-hours or on weekends at 646-5100. Callers may remain anonymous.