“Public Enemies” takes a somber look at the American gangster. 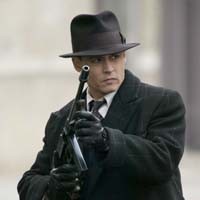 The mythical time and figures of the public-enemies era are by now difficult to deglamorize, although Michael Mann's film about John Dillinger tries to shear them as close as the hair on the backs of its male characters' tightly cropped necks.

Though filled with jailbreaks and bank robberies — Dillinger wasn't known for his needlework — only a few images qualify as memorable: Johnny Depp as the infamous stick-up man leaps a bank-teller desk with his Thompson submachine gun; “Baby Face” Nelson (Stephen Graham), crazed with the thrill of crime, stands on top of one; Nelson, again, blasts at FBI agents closing in, and later gets blasted, puffs of vermillion wafting where he once stood.

Interestingly, it's Dillinger at the movies, which he reputedly loved, that has the most lasting impact, when we see him revel in Clark Gable's image on the screen and cringe at his own.

Based on the book “Public Enemies: America's Greatest Crime Wave and the Birth of the FBI, 1933-34,” by Bryan Burrough, the movie begins with Dillinger's first daring prison break and subsequent life of bank robbing while tracking the concurrent rise of the FBI, formed to stop men like him. The movie offers Christian Bale as Special Agent Melvin Purvis, Billy Crudup as FBI Director J. Edgar Hoover, Marion Cotillard as Dillinger's moll and a long list of movie stars in supporting roles. What it lacks is a clear focus.

Shot in flat, grainy digital, the movie aims for realism with a docu-drama style while conforming to some of the more contrived elements of the genre — the love interest, the face-off between the good guy and the bad guy. In the process it misses something fundamental in storytelling. The gloomy sanitation of the prisons and the surprising drabness of the gangsters' hangouts are compelling, but the movie fails to rise above the grimy details of Dillinger's life. It's difficult to tell who did what and when, much less why they did it. It might have been better to put a little of the glamour back if it offered some meaning behind the mayhem. (R) 143 min. HHIII  S