Artist and musician Wes Freed talks about his new coffee-table book and his Richmond past. 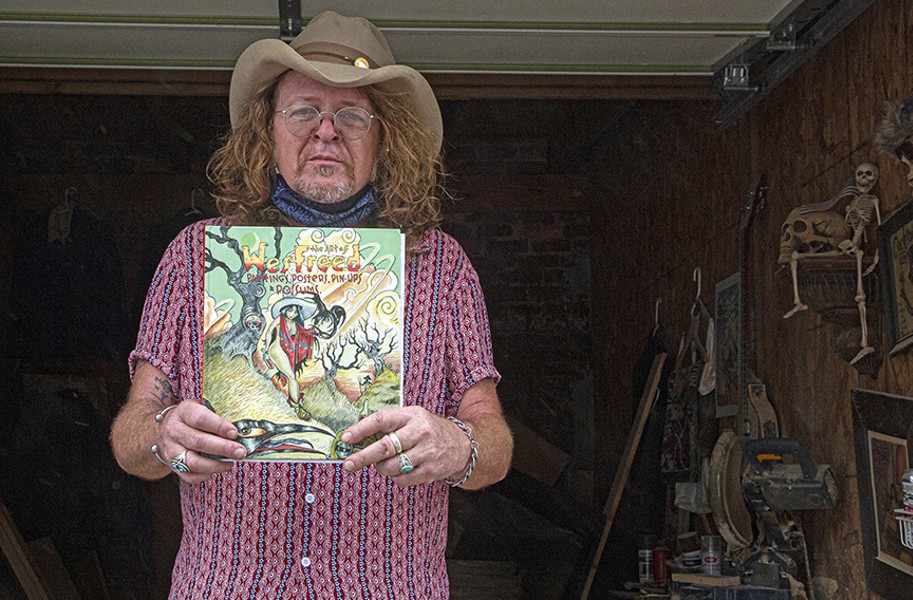 Grocery store introductions are weird during a pandemic.

Recently, I was stopping by a Carytown store to grab my favorite brand of ginger ale, some beer and flowers to brighten up the extended home stay when I noticed a guy who was clearly a lifelong musician, drifting in my direction.

Both of us were wearing masks, but I was pretty sure it was Wes Freed, a local musician and artist known for defining the visual aesthetic of the popular Athens, Georgia, band, the Drive-By Truckers. As he got closer, I could see his old school Gram Parsons and the Fallen Angels T-shirt, then I was positive.

While I had never met Freed in person, we had corresponded by email this summer about his new coffee-table book, “The Art of Wes Freed: Paintings, Posters, Pin-Ups and Possums.” And that day in the store, I remembered my last trip to Portland, Oregon, when I had gone to see legendary folk musician Michael Hurley, who once lived in Richmond. Hurley and his friend, Beth Littlewolf, made me promise to say hi to Freed.

What better time to do it than when we’re passing each other on the crackers aisle?

Freed has a gruff exterior, but he’s a friendly guy. I started to ask him about his art book, whether there were any local tie-in events, before remembering the absurdity of pandemic small talk. Oh yeah, there are no events, nothing scheduled in the future for who knows how long. We’re all just hoping to get through it.

“I heard that 80% of the clubs in Austin could be gone,” Freed told me, shaking his head. Pretty soon we were both shaking our heads with some familiar refrain of “this shit is crazy,” before drifting back into our solo shopping orbits.

A day or two later, his art book showed up in the mail at my home. Then I could enjoy his colorful Southern gothic world of old concert flyers and paintings filled with decrepit barns, dark alienlike women, cattle bones and cactuses. The concert posters just made me long for live music to return even more.

“Wes is one of a kind,” says Deep Grooves owner Jay Leavitt. “He’s got a golden heart, too. He’ll do anything to help.” He notes that Freed was the first person to bring the Truckers to Richmond, which became a second hometown of sorts for the group.

When we catch up by phone weeks later, Freed says he’s just “glad to have everything in one place,” regarding the coffee-table book. Here are more excerpts from that long talk.

Style Weekly: Can you talk about your musical background?

Wes Freed: I moved here in August of 1983. One of the reasons I came to VCU was they didn’t have a math requirement for the art department. I made friends and wanted to start a band from the get-go. Mutant Drone was the first band, kind of psychedelic punk, that lasted until ’84 or ’85. One guy in that band had taken so much acid he was pretty much non-verbal, just kind of grumbled. We played covers from “Shadowplay” by Joy Division to “Interstellar Overdrive” by Pink Floyd to D.O.A.’s version of “War.” Kinda sounded like a sloppy psychedelic version of X, because it was me and a girl singing. It was fun.

Then Mikey Rodriguez asked me to be in what was supposed to be a one-time Motorhead cover band on Halloween, but we never did that. That became Mudd Helmut, which I was in from ’85 until ’92, I think. During that time, Dirtball started as an acoustic version of Mudd Helmut, which was more of a punk rock band. Bill Kitchen who ran Rockitz wanted to do an afterparty thing when R.E.M. played at the Mosque in ’85 or ’86. We just did acoustic versions of Mudd Helmut songs – kind of honky-tonked ‘em up a little bit. That was fun to do and got its own legs; we added more people and it became a really big production, lot of people onstage. 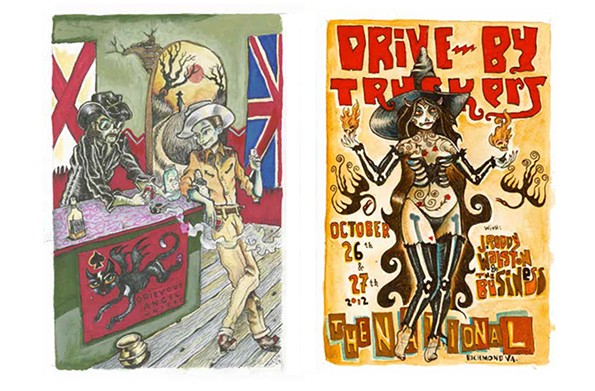 I left Mudd Helmut because I was enjoying Dirtball more. Mudd Helmut was physically intensive, throwing myself around onstage a lot. As I aged it was taking me longer to recover and the travel wasn’t wearing well. I was ready to be in a band that just played around town. But [Mudd Helmut] are all still friends and still get back together every once in a while. … With Dirtball we wanted to tour more, but some guys in the band were starting to have kids and things fell apart. We had shows on the books when the band broke up and a couple of the guys at Planetary Records volunteered [to fill in], so that’s where the Shiners came from, which was going to be Dirtball Jr. That went on for a few years until Jill, my wife then, started getting sick, which made it difficult for her to go anywhere, and I had to take care of her. … After a while, I got back with some of the people from Dirtball and some from Shiners and the Mag Bats were born around 2009, which is the band I’m in now.

How did your visual arts style develop, was that at VCU?

I think it comes from movies. I’ve always been a fan of spaghetti Westerns. … I graduated from VCU in ’87 with a BFA in painting and printmaking degree, minor in sculpture. Never went on to graduate work. But my style really started when I was a kid, drawing skeletons and war scenes. The “Jason and the Argonauts” claymation by [Ray] Harryhausen of the skeletons fighting was a big influence.

It’s stuff that’s floating around in my head – a lot is just the way I like to see things. I grew up in Crimora in the Shenandoah Valley and also lived out close to Mechanicville and had a barnlike shed I worked in. Now I live in the Fan where people are stealing bicycles like crazy, I guess they’re the new toilet paper. But the architecture around here informs the buildings [in the art]. And the characters are just stuff I enjoyed everywhere from cartoons and underground comics to spaghetti Westerns and old Playboys. Most women seem to appreciate these characters because they’re very powerful women – they’re not Barbie doll types.

I got turned onto a lot of painters going to VCU – Goya, Bruegal, Philip Guston, the German expressionists of the early 20th century. As well as good [local] teachers like Myron Helfgott, Jim Bumgardner, Milo Russell. It was all inspiring me to want to paint. Sometimes they inform your work in ways you wouldn’t notice – but it’s there.

Some of your older flyers also have Black Lives Matter references in them, do you consider your work political?

Well I suppose, as someone spray-painted on a wall once, all art becomes political. I’ve always been a political creature, I guess. Got turned on as a kid by Jimmy Carter’s election. Growing up on a farm and seeing someone like him, who was a small-town farmer, it was inspiring. I’m actually working on [a painting] of him and his wife for a friend of the family – and it’s going to be a birthday gift to [Carter]. But he’s hard to draw without looking like a caricature, and I don’t want it to look like that.

The Truckers are an incredibly progressive [Southern rock] band, they’ve lost fans over it. People are always telling them to just shut up and sing.

How has the Drive-By Truckers association most changed your life?

Between them and the internet, I’ve been able to do this professionally. It’s what I do now. I came down off the ladders in like the mid-aughts. It was their social media maven Jenn Bryant who hooked me up with a website, their social media guy hooked me up with a Facebook page. Either T-shirts or posters [for multigig runs] are available at all their shows. I’ve probably done at least 200 for them.

No, I haven’t had any shows or exhibits. Well, I did one at the Texas Wisconsin Border a long time ago and one at Sheppard Street Tavern a couple years ago. Nothing against galleries, but usually they want half of what you make – so I’d just as soon sell them on the internet or in person. My first record cover for a band I wasn’t in was for Cracker’s “Gentleman’s Blues” (1998, Virgin). 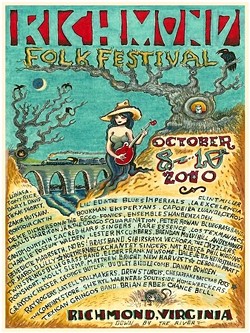 What’s your association with Michael Hurley, did his music and visual work influence you?

Oh yeah, definitely. Jill and I were going to visit her family one year and needed someone to watch our dog. He had just broke up with his girlfriend in Oregon Hill and needed a place to stay. So Christmas Day, just before we left, we woke up to him in the attic and just heard this stomping on the floor: He’s playing electric piano and singing [imitates in high warble] “I’ll Have A Bluuuueee Christmas Without You.” [Laughs] … We got back and eventually told him he might want to find a place to live, and he told us, “Ohhhh, I like it here just fine.”

I love that guy – I still have some of his stuff out in my shed.

As Richmond redefines itself, which direction do you think we should go?

Well, I don’t think it’s a bad idea to focus on the incredibly dynamic art and music scene we’ve got. I mean, craft brews are great if you like that kind of stuff. I’m not a connoisseur myself. But if you wanna throw money at something, support the arts, clubs and bars – so many people here make their living there.

To purchase the book ($55) and learn about Wes Freed’s art, visit wesfreed.com.