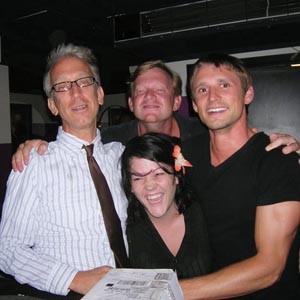 Eccentric actor and comedian Andy Dick was in Richmond last week with an appetite for bull rides, caged dancers and thumping techno.

The outlandish performer and tabloid fave made a stealthy appearance at RVAlution, the popular “circus-themed dance party” at the Hat Factory on Tuesday, June 29. Dick, who's perhaps best known as Phil Hartman's bumbling sidekick on the former 1990s sitcom “News Radio,” accompanied his son, Lucas, a self-described practitioner of “introspective, clean comedy” who had a gig earlier that night at Gibson Grill's Buckin' Comedy Throwdown, held the last Tuesday of every month. He also hung out on the patio at Cafe Caturra's Short Pump location.

Flynt Burton, who coordinates RVAlution, says Dick and his son appeared around 12:30 a.m. with an entourage of about 10 to 15 people. She says the group used the VIP suite on the third floor of the music venue, which comes with a private bar and food. Burton says Dick kept a low profile and that hardly any attendees knew he was there. Neither Dick nor his son performed at the Hat Factory that night.

“We really wanted to be cool about it,” Burton says. “It's kind of more fun to stay and watch the show from the suite, but if he wanted to jump on stage, we would have let him.”

Dick earns headlines for his notorious public behavior, such as his appearance at a 2006 Comedy Central roast of William Shatner, during which he licked the faces of Farrah Fawcett and Patton Oswalt and reportedly bit the hand of a New York Times reporter. But Burton says nothing out of the ordinary happened Tuesday at RVAlution.

“We treated him just like everyone else. He still had to be patted down at security,” Burton says. “I was prepared for the worst, but it was actually great.”

After Dick and his entourage left the Hat Factory at around 2 a.m., he was spotted locking lips with a male patron at the Mansion Room at Fieldens, the one-time gay-focused after-hours club on Broad Street.