And the Survey Says ƒ?Ý

A cultural accounting doesn't capture the star power of the local stage. 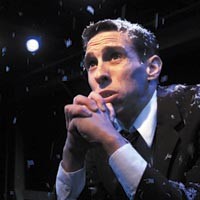 The recently published Richmond Cultural Census offers a disconcerting slap across the collective face of the local theater community. Prepared by consultant WolfBrown on behalf of Richmond's Cultural Action Task Force, the entire 58-page summary of the report includes only one statement that explicitly compares Richmond to anywhere else: “Levels of involvement in theatre are lower than what we've seen in other communities.” Further exploration of the survey of more than 2,800 local arts patrons reveals this sentence: “Results point to a deficit of theatrical activity in Richmond.”

This seems counterintuitive given how dynamic 2008 proved to be for the Richmond stage scene. A new company — Stage 1 — made a splashy debut with one of the most exhilarating events in recent memory, a star-studded concert version of “Ragtime: The Musical” in October. That was followed up with the terrific contemporary musical “Tick, Tick … Boom!”

In addition to strong offerings from perennial stalwarts such as the Barksdale and Firehouse Theatre Project, two fringier companies found firmer footing: Henley Street staged a winning version of “Richard III” in September and the African American Repertory Theatre shined with its summer production “Charcoal Street.” After 15 years in a cramped upstairs space at Fielden's nightclub, the Richmond Triangle Players ventured boldly into new territory, acquiring a 4,000-square-foot building in Scott's Addition.

That's not to say everything went off without a hitch for theater companies this year. Playing in makeshift spaces while construction of a new facility begins, Richmond Triangle Players productions this season have been a bit limp. The African American Repertory Theatre has been on hiatus while its artistic director, Derome Scott Smith, recovers from a stroke. Petersburg's Sycamore Rouge followed up a stellar “Streetcar Named Desire” in July with a ponderously historical “Read-y for Right” in October.

Still, these missteps aren't what the Cultural Census is talking about. Its definition of a theatrical deficit is an interpretation of survey respondents indicating that theater is less vital to the community when compared with other performing arts.

To the extent that this may be true — and we could argue statistics until construction on CenterStage is complete — I'm thinking it's because of what I'll call the paparazzi factor. Richmond is chock full of stars but every detail of their lives isn't splashed across the tabloids like in Hollywood. As a result, we neglect the significant natural resources in our own backyard.

Take Scott Wichmann. Beyond headlining one of the niftiest musicals of the year, Theatre IV's summer hit, “Guys and Dolls,” he also delivered a scathing lead performance in “Richard III” and is a one-man wonder in Barksdale's “This Wonderful Life.” Why isn't there a fleet of photographers shadowing his workouts with the local SEAL Team PT?

Then there's Audra Honaker, who was delightfully earthy in Swift Creek Mill's “Once Upon a Mattress” in April and effortlessly sexy in “Tick, Tick … Boom!” Why weren't the tabloids abuzz when her scandalous — that is, hilarious — YouTube video hit the Net? Google “Cooking with Audra & Jason” and see for yourself.

There are at least a half-dozen other local stars whose personal lives, not to mention their professional challenges, are at least as interesting as those of Paris or Britney. Forget Kate Winslett and Sam Mendes — how did Laine Satterfield, one of the luminous stars of the Barksdale's spring hit, “The Little Dog Laughed,” handle being directed in the Firehouse's “Eurydice” by her husband, Rusty Wilson?

I don't know if insider information on stars' personal lives really raises the level of interest in their work. But I do know that Richmonders are squandering opportunities to see scintillating performers up close and personal. For instance, Justin Dray, now ensconced in L.A., was awesome in Firehouse's “The Late Henry Moss” back in February. Wouldn't you like to say you saw them on a small stage before they hit the big screen? S