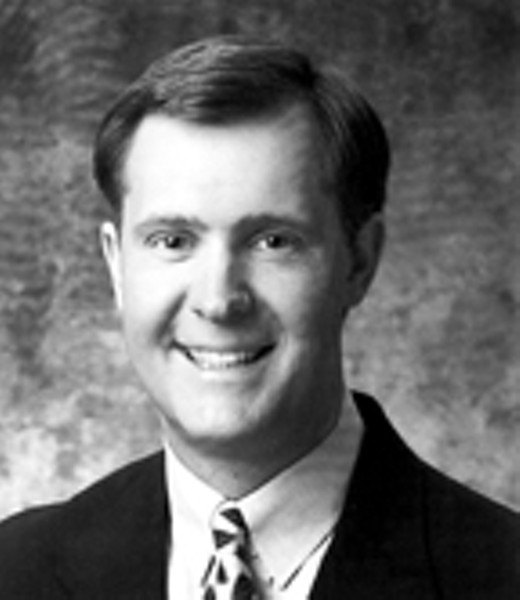 “Sports and weather people are journalists just like the news people,” says Woody Coates, assistant news director at NBC affiliate WWBT-TV 12. “And in our opinion, journalists should not endorse positions or products.”

“Now the line starts to get a little grayer when you get into sports, and sometimes weather,” Maroney acknowledges, “because there’s simply less conflict-of-interest potential there.” But, he adds, “if there were, we wouldn’t allow it.”

Tarkenton, 8’s sports director and anchor — and nephew of NFL Hall of Famer Fran Tarkenton — left the station in the fall after negotiations broke down over his new contract, the Richmond Times-Dispatch reported.

“There was, frankly, a gut feeling about the guy,” Skinner says, citing Tarkenton’s down-to-earth quality, and his role as a family man and Whitten customer.

Soon, Tarkenton was sharing the screen with “Discount Duck,” an animated character created by the agency to complement the slogan, “Prices so low you’ll want to duck.” (Skinner does the duck voices, although they were first performed by Garrett Chester.)

Then in November, Peterson took the helm of WRIC, moving from the ABC affiliate in Albany, N.Y. He says people started asking him, “What happened to Chip? I really liked him.”

Peterson asked around, took Tarkenton to lunch, and hired him back in March. He’s filling in as co-anchor of “Good Morning Richmond” (John Reid left to become communications director for Sen. George Allen) until May, then will stay solely with sports.

Tarkenton won’t do any news reports related to the auto industry, Peterson says, though Tarkenton may cover auto racing. Peterson said there is no station policy preventing placement of ads featuring Tarkenton in broadcasts that Tarkenton anchors.

And the duck ads will keep coming — to the initial surprise of Skinner. “I used to be in a news department,” Skinner says. “I was amazed, pleasantly so, that they let him do it.”

Aly Col¢n, who teaches ethical decision-making to professional journalists at The Poynter Institute in St. Petersburg, Fla., seems surprised too. Col¢n says blurring the line between news programming and advertising damages integrity and credibility. He asks: Is the reporter selling information as a commercial figure or conveying information from a journalistic standpoint?

“I think sports people in general like to consider themselves, when they are in a news program, as reporters,” Col¢n says, “and they are conveying the information for their viewers — and in an independent way.”

Peterson — who cites John Madden as an example — contends viewers are smart enough to know the difference, and his news director, Bill Foy, agrees.

“I think viewers are accustomed to seeing sportscasters handling commercial content,” Foy says. “It doesn’t compromise our presentation of news content.” He adds that it may even help, because viewers who see the commercials will be reminded of Tarkenton.

Another Channel 8 anchor, Juan Conde, is a pitchman-turned-newsman. He stopped his Circuit City commercial work after he was hired in April 1999. At the time, then-General Manager Tom Best told Style, “Our policy is that employees don’t do commercial endorsements.” — Jason Roop