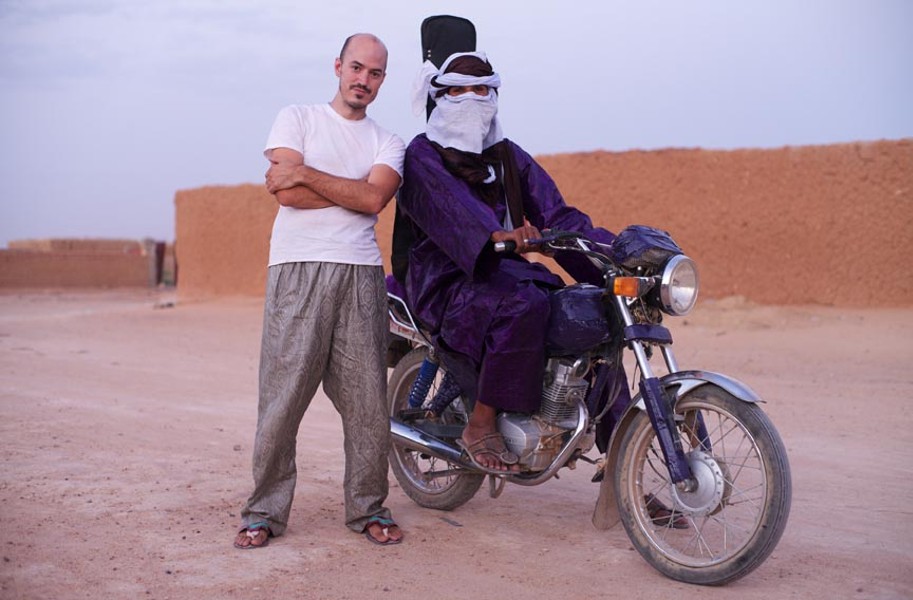 It started out as a joke that, when executed, was so unusual and compelling that the international media fell in love.

Portland-based filmmaker Christopher Kirkley, who runs the record label Sahel Sounds that explores the music of northwestern Africa, had been making field recordings as a self-described “guerrilla ethno-musicologist” for years. While living in West Africa, he discovered a mesmerizing, self-taught Tuareg guitarist named Mdou Moctar who plays a Fender left-handed like one of his influences, Jimi Hendrix.

The Tuaregs are an ethnic and language group of nomadic people in the Sahara Desert, often called the “blue people,” whose trancelike “desert blues” grew noticed in the West through fusion groups such as Tinariwen and Bombino. But Moctar was one of the few original artists pushing the boundaries of the form.

Kirkley’s idea was to create a fictional film, the first ever shot in the Tuareg language, based on the structure of the Prince classic, “Purple Rain,” starring Moctar in the lead role. The resulting low-budget film, “Akounak Tedalat Taha Tazoughai,” which translates to “rain that is blue with a little red in it,” also aims to provide an accurate look at life in an extremely poor region still adjusting to Internet access.

When it arrived in 2015, the at-times-beautiful film prompted coverage from the Atlantic, the New York Times and Rolling Stone, shining a spotlight on Moctar’s budding career. In a rare treat, the movie will be shown for free at the University of Richmond on Oct. 6, with a live performance by Moctar following the screening.

Kirkley and Moctar are currently on a U.S. tour, booked by former Richmonder Jim Thomson, which includes festivals, record stores, house parties, punk-rock clubs and esteemed venues such as the Kennedy Center and Lincoln Center.

“Chris called me last year, laid out his vision and wanted to maintain independent integrity and keep it DIY as possible,” says Thomson, who has experience booking foreign artists and securing visas. “When [Moctar] rocks out with his electric guitar and a band there’s a joyful, life-affirming expression but then he also has this more acoustic, introspective body of songs that pulled me in.”

Moctar’s latest album, “Sousoumetamachek” is filled with dreamy ballads, call-and-response lyrics and droning guitars meant to conjure the desert picnics of his youth in Tchintabaraden, Niger, a tiny village on the edge of the Sahara.

“Takamba is the first [Tuareg] music that was made on an instrument besides the imzad or the violin,” Moctar explains via a translator. “It’s music to make people dance and give emotions. It’s a rhythm with many breaks and pauses throughout. It’s a rhythm that rises and falls.”

Takamba used to be played with traditional guitars, he explains, but now the young artists in the Sahel are switching to electric. “In the future, with the evolution of pedals, this will give another taste to Takamba and give this rhythm more fans,” he adds.

Moctar admits he was surprised by the popularity of the largely improvised film, adding that he would love to do more acting.

Kirkley notes that they’ve been selling out many shows, and people are leaving happy. Oh, and he never heard from Prince’s estate about the movie, thankfully.

“‘Akounak’ has definitely helped with Mdou’s career. While from the outside, Tuareg guitar sounds like a very small niche genre, it’s a crowded one,” explains Kirkley via email. “I think the film carved out a place for Mdou amongst the other musicians. It’s been a boon for me as well, as it’s enabled me to move beyond record label into a place of collaborative art across cultures, which is really what the project is about.”

Kirkley’s label has numerous new records coming out, including a studio album from Nigerian female trio Les Filles de Illighadad, as well as a new film, a Tuareg acid Western called “Zerzura,” premiering in Niger this November. He’s also working with a group of Tuareg youths on a remake of the 1997 film “Titanic” in the Sahara.

If there’s one thing that Moctar would like Americans to know about his people, it’s related to our often myopic take on his religion.

“We are Muslims, but we are also against terrorism,” he says. “Because the Americans think if you are Muslim, you are terrorist, but the words terrorist and Muslim have nothing to do with each other. We are a population that [is] in a place for many years, that was divided up. We’ve rested there as though we have no nationality between three countries [Libya, Niger, and Algeria].” S

The screening of “Akounak Tedalat Taha Tazoughai” and the concert take place on Oct. 6 from 6 to 9 p.m. at Ukrop Auditorium in the Robins School of Business. Introduction and post-film discussion led by Andy McGraw, an associate professor of music, and Mdou Moctar. Free.