When love is defied, fashion’s denied in Richmond Triangle Players’ “Regrets Only.” 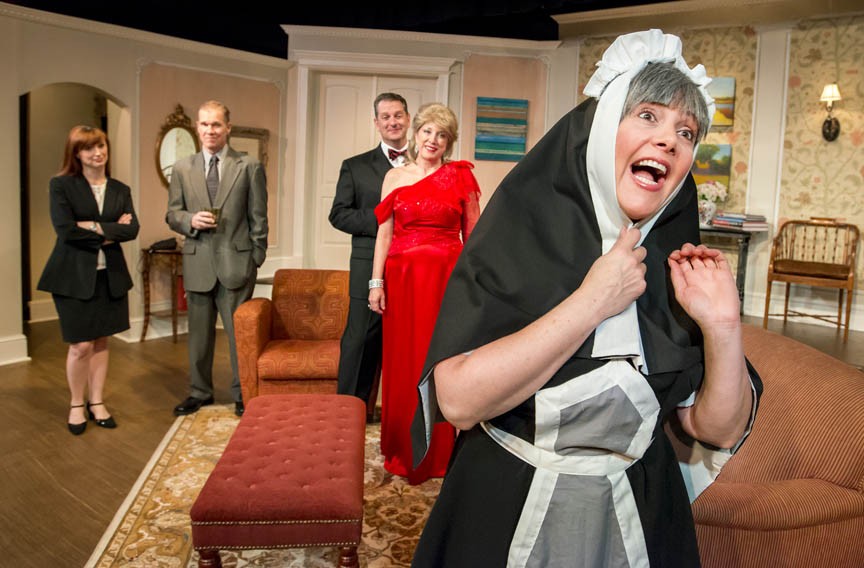 In Aristophanes’ play “Lysistrata,” the women of ancient Athens vow celibacy until their lovers agree to negotiate an end to the Peloponnesian War.

Paul Rudnick’s “Regrets Only” offers a similar stalemate — except instead of women denying sex, it’s gay men withholding haircuts and designer dresses to fight a proposed ban on gay marriage. This politically charged romp centers on Hank Hadley, a New York fashion designer who recently lost his partner to cancer.

Hank and his best friend Tibby are heading out for their first night on the town since the death when Tibby’s husband and daughter announce they’ve been asked to draft a constitutional marriage amendment. In response, the normally apolitical Hank decides to take action on the eve of a big social event, effectively closing all Manhattan salons, boutiques and most of Broadway.

Joe Pabst gives a funny and frank portrayal of Hank, a man trying to put on a brave face in spite of losing a partner. Melissa Johnston Price is equally charming as Tibby, the socialite trying to live a politically uninvolved and conflict-free life. Michael Hawke does his best to humanize Tibby’s conservative husband, Jack, and Donna van Winkle’s comedic timing is excellent as Tibby’s mother, Marietta.

Despite Jacqueline O’Connor’s valiant efforts, Rudnick’s script doesn’t give her character of Myra the maid enough to work with. Myra’s gimmick of wandering into scenes with different accents and costumes wears thin on its second occurrence, and her constant interruptions break up much of the show’s tension and pacing.

Though Rudnick’s script is loaded with one-liners and delivers plenty of laughs, it’s also jarringly preachy at times. The play’s great premise never fully delivers on its promise. Granted, the story is a comedy of manners, but little is enlightened in the play’s stereotypical depiction of these characters and their roles in society. For all its progressive talk of marriage, the show is weirdly old-fashioned in its portrayal of women, representing them as slightly helpless and clothes- and wedding-obsessed.

Longtime video producer Jerry Williams — in his first stage directing role since 1971 — milks all the laughs he can out of the play, but ultimately his direction can’t make up for the script’s flaws. David Allan Ballas has designed a gem of a set for Tibby and Jack’s Fifth Avenue penthouse, and D. Mark Souza’s costumes are exceptional, with the women’s dresses in the final scene being particularly stunning.

While enjoyable and frequently funny, Richmond Triangle Players’ “Regrets Only” is a good production of a subpar script.