An Order of Noodles 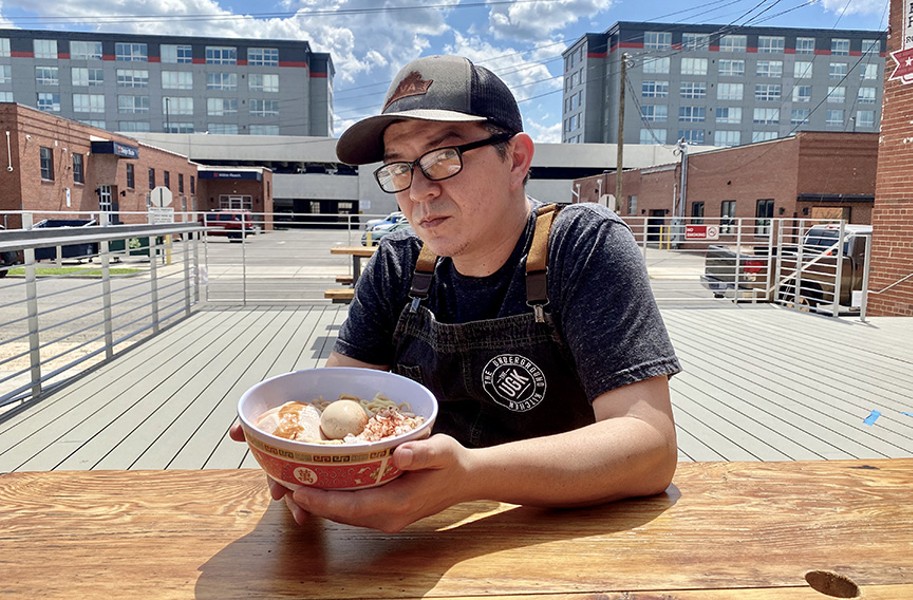 Scott Elmquist Chef Will Richardson of Kudzu will be donating 20% of its yock-a-mein proceeds to Black Lives Matter affiliated organizations.

“We’ve been trying to tell this story for a while now,” chef Will Richardson says.

It makes sense, this gap between introduction and reception. The story of yock-a-mein is more than 100 years old with complex roots spanning several parts of the country, from the mid-Atlantic to Louisiana. The name of the dish, Richardson explains, loosely translates to “one order of noodles.” But it has many monikers and aliases — Old Sober, box of yock, ya-ka-mein. It has evolved with every making through time and teller.

Richardson grew up hearing “yock” – it means “one of” and “an order of” – at his grandparents’ Chesterfield restaurant, Moon Gate. At the time, he didn’t realize that an order of noodles was more than a menu item.

“A few years ago I came across these oral histories from Southern Foodways Alliance and it clicked,” Richardson says.

In the late 1800s and early 1900s, because of segregation, many Chinese restaurants could only open in predominantly Black neighborhoods. The intersectionality between the cultures was brewed up in one hot pot of what, Richardson says, is essentially a bowl of chicken noodle soup.

There are many variations, depending on where you are.

The Tidewater region has “box of yock,” named so for the Chinese takeout box in which it’s served. While Virginia’s variation uses lo mein noodles, New Orleans uses spaghetti noodles. Both typically offer a choice of meat plus a “dice of raw white onions,” according to the foodways alliance.

“I love the New Orleans yock culture,” Richardson says. “It’s very lively. It’s interesting to hear about these clubgoers in the 1940s and ’50s who would go out until late at night or early in the morning and end the outing with yock-a-mein (or, in NoLa, Old Sober).”

Richardson says Kudzu’s version of yock-a-mein will have a simple base, with plenty of accouterments. “It’s really an homage to all the variations. My grandparents’ version [in central Virginia] was vastly different to the Southeastern version. We’ll have Creole seasoning and different hot sauces and chopped onion, we’re making it in a way that is very customizable.”

Kudzu has had yock on the menu before, with Richardson and sous-chef Corey Bertsch trying to facilitate the conversation around the dish’s fascinating history — Richardson is Chinese American, and Bertsch is African American.

“The first few times we ran the special people didn’t seem that interested,” Richardson says. “But now – what more relevant time is there? This isn’t the first time a civil or social conversation has happened over a dish.”

To that end, Kudzu will be donating 20% of all yock-a-mein proceeds to a different Black Lives Matter affiliated organization each week.

These include the Asian American Advocacy Fund, an organization based in Georgia, which serves as an Asians for Black Lives resource, the Richmond-based Black Emotional and Mental Health Collective, known as BEAM, which addresses racial disparities in mental health and criminal justice, and the Black Lives Matter global network run by a multiracial panel of community experts. Also among the groups are the Equal Justice Initiative, which is committed to ending mass incarcerations in America, and EmbraceRace, an organization committed to helping parents raise children who are informed about race.

All of these organizations mean something to the Kudzu team, and each addresses critical points in the movement to end systemic racism and injustice. And one hits especially close to home.

“One of the reasons that we are deciding to donate to the BEAM collective is in part because of an incident we had right here in Richmond a couple years ago when an African American man named Marcus-David Peters was killed by Richmond police during a mental health crisis,” Richardson says. “This is a thing that has to be talked about – what it comes down to is if I can help to facilitate a bigger conversation by doing what I know how to do best. … I think it’s absolutely important to embrace that.”

To order your bowl of yock-a-mein, visit facebook.com/kudzurva/ and place your order every Tuesday starting at noon for weekend delivery.