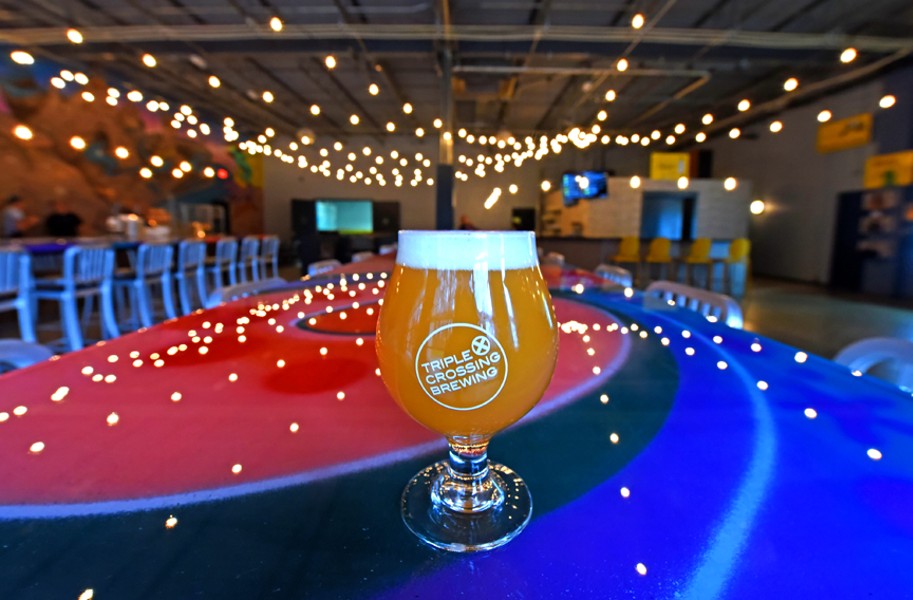 Scott Elmquist Triple Crossing Brewing, now in its expanded digs in Fulton, is part of the new Richmond Beer Trail.

Richmond has been barreling ahead in establishing breweries, boasting more than 20 production facilities with tasting rooms. But the area’s been slow to claim its own beer trail. As of this year, that’s all changed.

Like wine and bourbon trails, the beer variety provides an easy-to-follow guide. Amenities vary: Some offer passports and swag — visitors stop at a given number of locations and can claim a prize. Others merely provide information.

A Richmond trail has been in the works since 2014, when breweries formed Richmond Breweries United, assisted by Brown Distributing. The group created a consumer-focused brochure, but its reach was weak.

“We were bootstrapped to the nth degree,” says Scott Jones, outgoing president of the group. Brewery dues weren’t enough to maintain and promote the brochure, he says, and organizing brewers can be a little like herding cats. Their attention is on producing beer, distributing product and maintaining a successful tasting room, with little energy left for unproven marketing strategies.

So Richmond Breweries United turned its attention to Richmond Region Tourism and formed a partnership. In the beginning, this simply meant that the tourism website listed locations and contact information for the breweries. But both organizations wanted more.

“Craft beer has been, and will continue to be, a key marketing theme for Richmond Region Tourism’s out-of-market promotion, advertising and PR efforts,” says Jennifer Hendren, the tourism office’s vice president of marketing.

Two years later, the groups have launched the Richmond Beer Trail, which features a brochure with a spotting map, plus brewery names, addresses and descriptions. The map also extends to Ashland and Caroline, Chesterfield Goochland and Henrico counties — although not to Petersburg. It includes the full range of Richmond’s breweries, from its largest, Stone Brewing, to such nanobreweries as Final Gravity.

There’s also swag, which can be claimed after five stamped brewery visits. The soft launch of the trail featured branded T-shirts, and the 2017 giveaway is a hat.

Although the trail helps locals navigate the rapidly growing craft beer scene, the initiative is meant to encourage out-of-towners to spend time and money at the city’s breweries and surrounding businesses.

“We’re not a small beer town anymore,” Jones says. “We want to make a visit to Richmond memorable, not just, ‘I went to this one brewery.’”

More than 10 million people toured small and independent craft breweries in 2014, according to an estimate from the Brewers Association in October, calling beer tourism “a big deal.” There are beer lovers who take vacations to trails, festivals and for special releases.

But the emphasis on the beer tourism dollar extends beyond the breweries, Jones says, citing benefits to hotels, restaurants and other city sights. “That’s why Richmond tourism is so excited about it,” he says. “The craft beer consumer has disposable income that they’re willing to spend on experiences.”

Other Virginia trails include Loudoun County’s LoCo Ale Trail, the Blue Ridge Beerway in the Roanoke Valley, Shenandoah Beerwerks Trail, which covers the Shenandoah Valley, and the Coastal Virginia Beer Trail. The Brewly Noted Trail spills over into Virginia at Bristol, though most of its breweries are in northeast Tennessee.

Most of these trails have been organized and promoted by tourism organizations, intent on capitalizing on beer travel by making breweries more accessible. The passports and swag seem to imply that visitors need a little extra incentive to visit multiple destinations.

The gifts serve another purpose too, Hendren says.

“When visitors share their experiences on social channels and proudly wear their Richmond Beer Trail gear once they get back home,” she says, “they’re helping us spread the news about how Richmond is a craft beer destination that should be on every craft beer lover’s radar.”

Brochures are available at local breweries and by download at richmondbeertrail.com.