An Oasis in Charlottesville

A Richmond export, the Quirk Hotel, takes root in the Piedmont.

Scott Elmquist Broad arches, designed by ArchitectureFirm, create an iconic canopy that connects the hotel entry to the rear of the lobby bar, shown here.

CHARLOTTESVILLE - The excitement was palpable on a recent weekday around the Rotunda at the University of Virginia. Students were sashaying amid the colonnades, posing in graduation gowns, clutching champagne bottles and simultaneously congratulating pals and bidding them farewell.

Later that morning and a short distance away at 499 W. Main St. near downtown, staff members at the Quirk Hotel, whose grand opening in March last year coincided with hospitality shutdowns statewide due to the pandemic, chatted sotto voce in small clusters within the sprawling white-walled lobby, a sweepingly grand and modernistic space. The hostelers expressed delight, or perhaps relief, that the 80-suite destination was sold out for upcoming weekends that included university graduations, Mother’s Day and late spring weddings. What a difference a year makes. 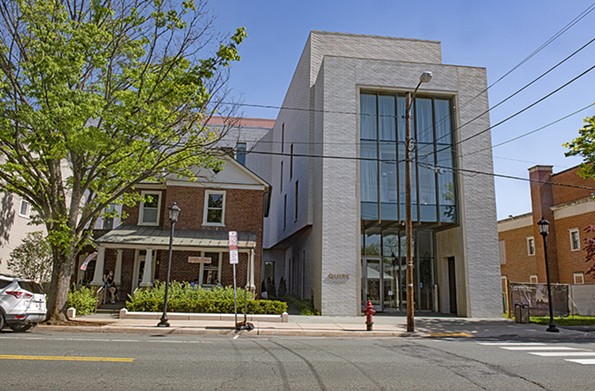 My reason for visiting the three-building Quirk complex wasn’t to stay but to view an exhibition in the hotel’s Quirk Gallery featuring works on paper by Diana Detamore and Pam Fox, two distinguished Richmond artists.

I was also intrigued to see how Quirk’s alchemy of melding lodging, dining, spirits and contemporary fine art had been translated to Charlottesville from its flagship hotel in downtown Richmond, which opened in 2015. In the arts district, developers Katie Ukrop and Ted Ukrop had masterminded the conversion of an early 20th century, renaissance-revival department store into a 73-room boutique hotel plus art gallery. But in Charlottesville, a college town 70 miles west, they have delivered a new $30 million, 82,700 square foot brutalist structure. It is immediately clear that the Ukrops and their architect, ArchitectureFirm of Richmond, aren’t pandering aesthetically to Jeffersonian classicism, something that can make visiting the third president’s hometown annoying.

The refreshing and brilliant thing about the design and decor of Quirk Charlottesville is how modernism has been applied to knitting together the once architecturally discombobulated Starr Hill, a neighborhood with, well, many quirky architectural elements. 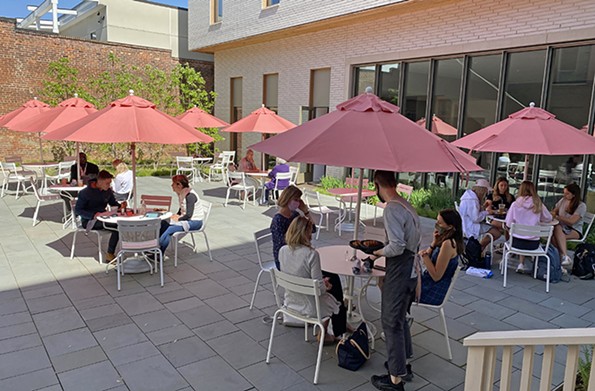 The new Quirk is a blocky, aggressive, inverted L-shaped white brick structure whose rectangular lobby wing fronts West Main Street, coming flush with the city sidewalk. Inside, the lobby and bar extend the full depth of the city block to Commerce Street. There is a sense of welcome and grandeur upon entering the front doors. Your eye extends to the wall of glass a city block away with its 30-foot-high windows overlooking the modest neighborhood beyond. But breaking your gaze at the lobby’s ceiling is a series of 15-foot-high half arches that crisscross and support the upper floors. They are a sly salute to the classical groin vaults that distinguish the Richmond Quirk lobby but abstractly recall something exotic, perhaps the arches in the Alhambra in Granada, Spain.

At the rear of the hotel, the be-arched lobby wing extends to the left where one of two large ballrooms here overlooks Commerce Street. Another ballroom window frames nearby Ebenezer Baptist Church, a red brick gothic revival local landmark. Here, as in many places, strategically placed windows connect the hotel with its environs.

But there are visual surprises aplenty inside this savvy inn. The understated art gallery for starters, which has the feel of a sophisticated museum. Any arts institution would envy the terrazzo flooring and solid brass stair handrail that graces the grand interior staircase.

Back at the front lobby near the reception desk and the impressive hotel bar, a passage leads to elevators, restrooms and the Pink Grouse, an elegant, 65-seat restaurant that is furnished with midcentury modern flair. The wow factor here are floor-to-ceiling windows that connect the dining room spatially with the outdoor dining terrace that is defined by two adjacent 19th-century dwellings. Each is the opposite of brutalistic – think picturesque. The Beige Brick House is an 1824 former dwelling that houses the hotel’s salon and some guest quarters. The smaller Red Brick House, a melding of arts and crafts and Italianate styles, houses the Quirk Cafe, a coffee bar with wine, beer and light fare. 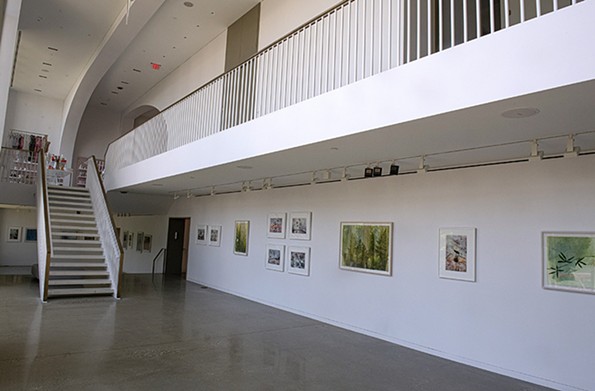 The Quirk's pièce de résistance, although I hesitate to use that term since there are so many spot-on spaces, is the rooftop bar on the hotel’s fifth level. It offers plush, outdoor seating from which to enjoy 360-degree vistas of the cityscape, foothills and Blue Ridge Mountains.

The Quirk hotel, with so many comfortable spaces and options, should become an oasis for Charlottesville daytrippers as well as overnighters. It’s less than a 10-minute stroll to the city’s downtown mall, the most attractive and successful pedestrian downtown mall in the state. Bottom line, with only a year under its belt, the Quirk may already be one of the nation’s iconic college town hotels, alongside the venerable Hanover Inn at Dartmouth, Carolina Inn in Chapel Hill and Tucson's Arizona Inn.

Diana Detamore: “Fleeting Encounters” and Pam Fox: “Table Garden” are at the Quirk Gallery in Charlottesville through June 6. Closing artists’ reception on Saturday, June 5, from 2 to 5 p.m. 434-729-1234.