An Interview With Mike Ledesma, Owner of Perch 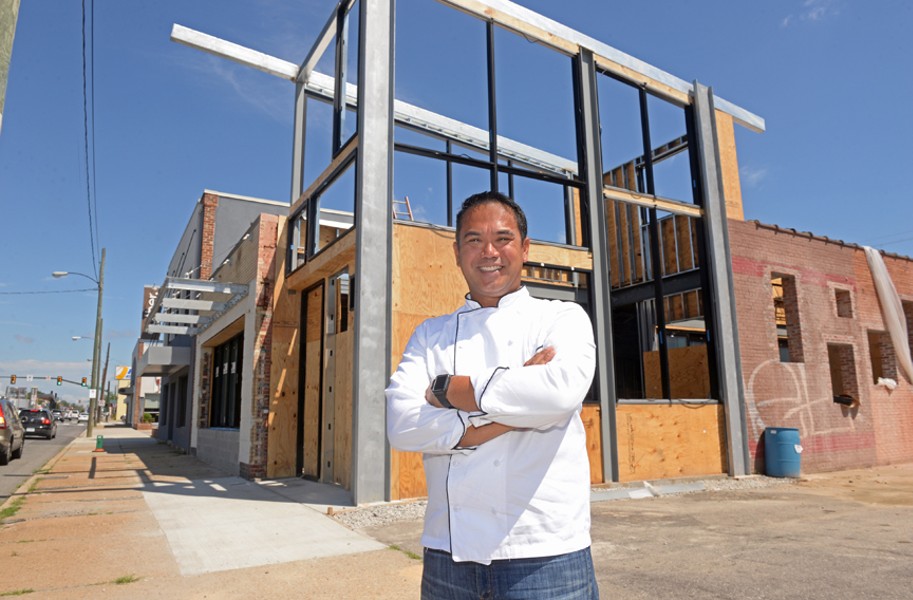 Scott Elmquist Owner and chef Mike Ledesma is getting closer to opening his first restaurant, Perch.

Mike Ledesma has made a name for himself in this town. His résumé includes Richmond Restaurant Group, Max's on Broad, Kabana and the Hard Shell, not to mention stints at the Greenbrier in West Virginia and restaurants in Hawaii. Readers named him best chef in this year's Best of Richmond issue, and last year's announcement that Ledesma would open a restaurant of his own in Scott's Addition was met with the kind of enthusiasm you'd expect in a food-obsessed city like Richmond.

Preview events for Perch, at 2918 W. Broad St., are finally upon us, and while Ledesma says he's enjoyed the process of launching a new business, he's ready to return to what he loves.

"I can't wait to get back to the kitchen," Ledesma says, adding that even in an ever-changing restaurant scene, he's excited to offer something different. Is doing something different even possible anymore? He says yes, absolutely. "Every chef has a place they've been to that brings them back home, and I think it's their interpretation of that."

Ledesma, born to Filipino parents, grew up in New York and Annapolis, Maryland, and he intends to bring flavors from every place that has inspired his cooking, including Hawaii, West Virginia and Virginia. He says he's looking forward to working with nearby farmers and butchers, and the menu could change daily based on what's available. He's teamed with Marlin Remick, who's been cooking in Richmond for more than a decade and will help develop the menus.

"There are standards and themes that tend to run in this region, and certain things not being present can be as shocking or different as what you do have," Remick says. "So we're sort of intentionally daring people to try something a little different instead of giving them a safe offering that everyone else has."

The team isn't ready to share many details about what we can expect on the menu, but this week's pairing dinner at Blue Bee Cider does offer a sneak peek. Unfortunately by the time of publication it will be too late to buy tickets for the event, but the menu includes fresh spring rolls, crispy pork, romesco shrimp, arroz a la Valenciana and jackfruit fritters.

For special, small-group weekend events, Ledesma will offer something we don't see much in Richmond: personalized dinners at a chef's counter. Guests will get up-close access to the chef, and he'll customize eight to 10 courses just for them. Drink pairings will also be available.

"Six seats at a bar, brick oven behind me," he says. "I'll make a couple phone calls, see where they're from, what they've enjoyed in the past, and make a menu."

A veteran in the food and drink world, Kristel Poole is the general manager, and she's working on curating the bar program. Even though much of the menu will feature Asian-inspired flavors, she says the drink menu will be heavily focused on wine — an unconventional combination.

"You've got this spice, the sweet and sour, and a lot of these flavors are not things that people are used to pairing wine with," Poole says. "You can take really Old World wine like a German riesling and pair it with a pad thai that's spicy and it's a perfect pairing."

The "relatively small bar space" will utilize some local spirits on the cocktail menu, with a focus on gin and rum. As for what's on draft, two of the taps will feature collaborations with local makers. Three Notch'd Brewing Co. has created a guava gose specifically for Perch, and Blue Bee Cider is on board with an exclusive ginger cider.

The team doesn't have an opening date set in stone yet, but it's planning more preview events like a party at the Veil Brewing Co. on July 4 and a six-course family-style dinner at the Broken Tulip in the near future.