An International Symposium on Islamic Art Returns to Richmond 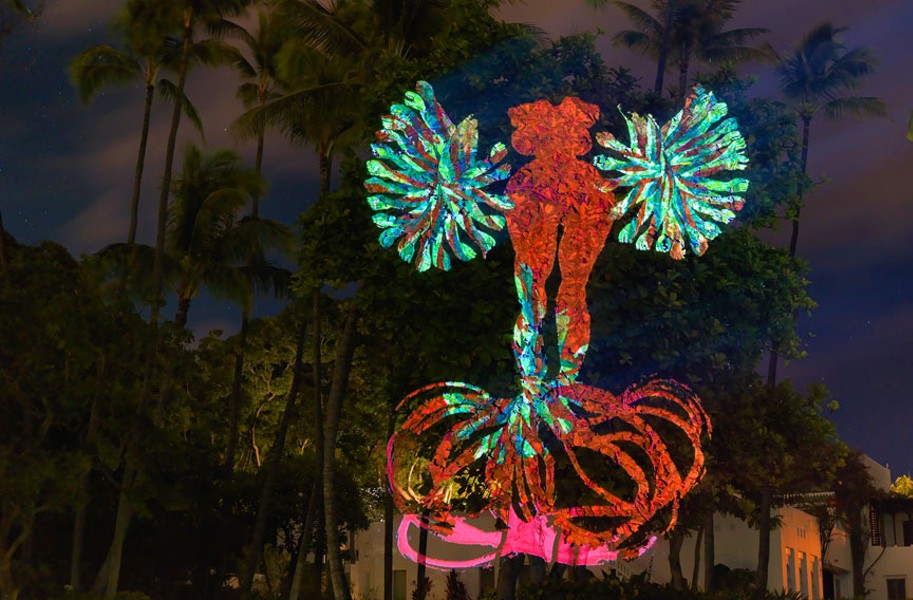 The work “Unseen 2” by Pakistani-American artist Shahzia Sikander is made with high definition digital projection. Sikander will be one of the artists discussing Islamic art at VMFA from Nov. 2 to Nov. 4.

For contemporary artists from Islamic countries, living there or elsewhere, categorizing their work as Islamic can be challenging.

This is mainly due to negative tropes associated with the term in a post-Sept. 11 context and because it suggests that the work addresses religious concerns. Contemporary art with ties to the Islamic region can be more demanding because it might require familiarity with the region's history, tradition, or artistic practices, less known to American audiences.

Artist Lalla Essaydi, a native Moroccan who moved to the United States more than 20 years ago and now divides her time between Morocco, Boston and New York, doesn't believe that art should have boundaries.

"Any art is a result of the life that we live in," she says. "It's so globalized now that it's even difficult to say contemporary Islamic art [or] contemporary American art. ... It shouldn't have labels. Art is art. It doesn't matter which region it comes from."

Likewise, artist Shahzia Sikander calls Islamic art — contemporary and historical — a "truncated history" that must be seen as more than just a trite representation limited to a geographical site. "Absolutely [I consider my work as contemporary Islamic art amongst other categories]. I am alive at this time. All art is in dialogue with its time and space. ... What makes the work speak to the world? What keeps the work alive?"

Essaydi, Sikander and other leading scholars, curators, artists, fellows and collectors of Islamic art from around the world will be debating the issue for three days at the Virginia Museum of Fine Arts for the biennial Hamad bin Khalifa Symposium on Islamic Art, "Islamic Art: Past, Present and Future." The ticketed event, hosted by the Virginia Commonwealth University School of the Arts and the Qatar Foundation, is open to the public and organizers anticipate an audience of 500. Past sites have included Doha, Qatar, Cordoba, Spain, and Palermo, Sicily, but for its seventh iteration, the symposium returns to where it all started: Richmond.

Islamic art historian Jonathan Bloom, who co-chairs the symposia and shares an endowed chair in the university's art history department with his wife of more than 35 years, Sheila Blair, explains how it arrived.

"[The Qataris] gave money to VCU to establish the Khalifa professorship in Richmond and before they did that, they wanted to see what the shape of the field was," he explains. "The people at VCU in 2005 really didn't know terribly much about Islamic art. They were just handed basically a check, so they wanted to figure out what to do. They put together a symposium."

Bloom says he and his wife had just written an article for a journal in art history about what Islamic art was and "someone had read it and they asked us to help them organize [the symposium]." He adds that the first conference had about a dozen speakers. "It set a tone that we wanted subsequent ones [to have]," Bloom says. This will be the last symposium organized by the husband-and-wife scholars who routinely finish each other's sentences.

"We're handing the reins back to [VCU]," Bloom says. Blair laughs before explaining that they are retiring while Bloom adds that "when we started studying this field, in the 1970s, no one ever talked about contemporary anything."

Linda Komaroff, the curator of Islamic art and department head for art of the Middle East at the Los Angeles County Museum of Art, confirms this: "I only started collecting contemporary Middle East art for the department in 2006," she says. Since then Komaroff has acquired for the museum the largest public collection of contemporary Islamic art in the United States.

Even though approximately half of the audience will be art-world specialists, organizers explain that the symposium is for any lifelong learner. Komaroff hopes those new to Islamic art will see the presenters' passion and the discussion will encourage audiences to see Islamic art and the Middle East region differently from how it's portrayed in the media.

Politics remain just beneath the surface given the current uncertainty about a U.S. travel ban or the Qatari conflict with its Persian Gulf neighbors. "Even though we're dealing with art, politics constantly rears its ugly head," Bloom admits. But he and others hope that dialogue and exposure to art will help people cross cultural divides.

"I think of myself and my work as being a bridge," Essaydi says. "It was very difficult at the beginning to adapt to life here in the West and then to navigate between the two cultures. … It really requires lots of patience and being more understanding of people. ... It is my duty, instead of getting upset or offended, to try and make them understand and teach them a little bit about both cultures." S

The seventh biennial Hamad bin Khalifa Symposium on Islamic Art will be held from Nov. 2-4 at the Virginia Museum of Fine Arts. For information and tickets, see islamicartdoha.org.