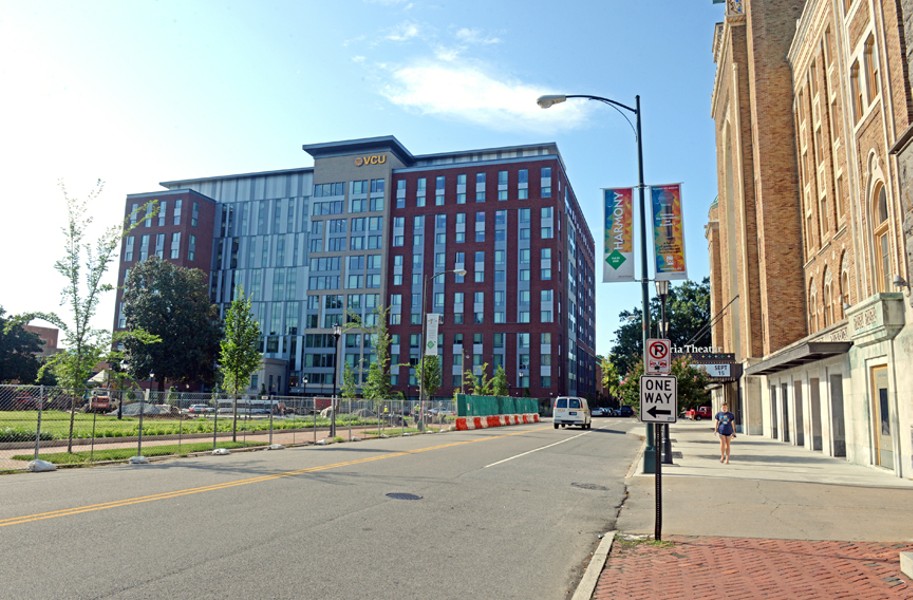 "If we'd gotten here earlier, you'd have your choice of beds," a mother admonishes her freshman son on the sweaty afternoon of Aug. 18. The pair maneuvers a dolly full of his belongings along the brick sidewalk of Laurel Street, past the Altria Theater, and across Main toward the dramatically expanded Gladding Residence Center at Virginia Commonwealth University.

Close behind, another freshman parent hustles toward the air-conditioned relief of the same dormitory. Approaching the $96 million, 12-story and 360,000-square-foot behemoth that looms over Monroe Park, he exclaims to his daughter: "Wow, your dorm is the biggest on campus."

Gladding also may house more people than any other single residence in the city. As classes start this week, some 1,518 freshmen at the 31,000-student university will call it home.

The expanded dorm complex, named for the late Jane Bell Gladding, a long-time elegant and wise dean of students, represents a major push to enhance campus life. Officials admit that, historically, the university rates abysmally poorly regarding student satisfaction with university housing. This dorm is arranged primarily in semi-suites, or two double bedrooms sharing a bath. There is an exercise room and community meeting rooms on the ground floor. And Gladding is conveniently within a few blocks of such major necessities and niceties as the Cabell Library, dining hall, Cary Street gym and academic buildings just east of Belvidere Street and U.s. Route 1.

The Monroe Park campus' three other high-rise dorms — Ackell, Brandt and Johnson — are a straight shot across Monroe Park.

And with Gladding now expanded, Cabannis Hall, a high-rise which, for many years, housed freshman on the medical campus, will be shuttered. At that location, students were isolated in the listless surroundings of the Virginia Bio-Tech Park. They had to take shuttle buses to meals and classes. And while there was a ragged recreation room in the basement, the underclassmen and women were left largely to their own devices. Despite some bonding experiences in the spare surroundings, an alumnus who'd done time at Cabannis said it's no surprise the dorm was called Cannabis Hall.

To accommodate the Gladding expansion, which occupies the entire north side of the block bounded by Main, Laurel and Pine, much of the original complex was demolished. This included Gladding One and Gladding Two, three-story brick buildings designed by Glave Newman Anderson in the early 1980s. Gladding Three, an architecturally well-tailored building that was added some years later, remains.

In designing the new complex, the architecture firms of Clark Nexsen and Ayers Saint Gross wisely retained the front of a 1912 public bathhouse that had previously been woven into the complex. The two-story, sandstone, and renaissance revival jewel would have fit nicely in the late 17th century London of architect Christopher Wren. Architect Russell Edward Mitchell of Norfolk designed the beaux arts bathhouse.

In addition to its classical architectural pedigree, the former bath is a link to when Monroe Park's south faced commercial buildings and homes of blue-collar workers. The Branch Public Bath allowed Oregon Hill residents, many without plumbing, to take regular showers—women and men on alternating days.

Wisely, this architectural fragment, albeit swamped visually by the new structure, has not only been saved, but celebrated. Its crisp, rusticated and sandstone facade provides the design frame of reference for at least the first level façade of the new building.

The 12-story, U-shaped, Gladding hall is built flush to city sidewalk on its Main, Laurel and Pine streets and Gladding III faces Cary to create a sense of enclosure on the south. The cloisterlike, central open greensward is about an acre. Comfortable metal benches, generous landscaping and fencing on the southeastern open side, should make this a welcome—and much needed oasis: It may be the largest expanse of grass on the Monroe Park campus.

Additionally, because of how the building is situated, it receives direct sunlight for the greater part of the day. Happily, on the Main Street side, no shadows extend onto Monroe Park.

A major challenge for the architects was how to break up the massive facades of the building. And they are overall successful. The Main Street front is divided into four large bays, each with a various claddings of red brick, metal or composite stone. And since the windows vary slightly in size and placement, the building does a kind of slow dance visually, rather than remain static.

From Monroe Park looking south, the building provides a much-needed urban wall along Main. Whereas the Franklin and Laurel sides were already well-defined — in part with landmark buildings — Gladding serves to complete an architectural frame around the park. While the effect isn't as aesthetically magnificent as Rittenhouse Square in Philadelphia or Madison Square in New York, it's a damn sight better than the previous lack of a backdrop.

And speaking of Monroe Park, soon to be reopened after being renovation, many freshmen will have a magnificent view of the long-awaited results from their rooms.

This should provide a natural high in itself. Who needs cannabis? S