An exhibit of landscape paintings finds diversity in the Shenandoah Valley 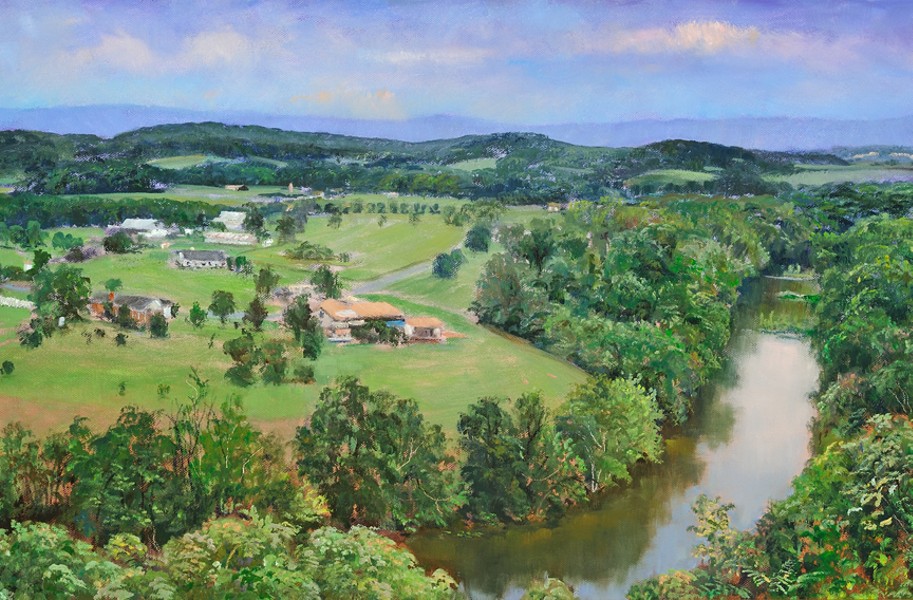 “Home on the North Fork, Overlook at the New Market Battlefield” by Andrei Kushnir

The Virginia Museum of History and Culture has managed to squeeze an entire valley into one gallery. "Oh, Shenandoah: Landscapes of Diversity" represents 11 years of artist Andrei Kushnir traipsing valley roads to paint present-day landscapes that tell the story of the region's geography and past.

While many people know that the Shenandoah Valley, bounded by the Potomac and James rivers at the north and south and the Blue Ridge and Allegheny mountains to the east and west, encompasses eight Virginia and two counties and two in West Virginia, far fewer may be aware of its history as a place of religious diversity.

The need for a buffer zone against Native American attacks, as well as fear of French-Canadian invasions, was the motivation behind Virginia Lt. Gov. Alexander Spotswood's exploring the region in 1716 and claiming it for the English. Virginia's colonial government then chose to relax its long-standing policy of discriminating against non-Anglicans and open up the territory to those affected by religious persecution. Wasting no time in abandoning places such as Pennsylvania, willing pioneers moved south along the Great Wagon Road in search of new lives in a more tolerant region.

A self-taught oil painter who paints landscapes outdoors, Kushnir has executed 263 paintings of the Shenandoah Valley, 52 of which are included in this exhibition. Each reveals the valley as a landscape of American settlement for Baptists, French Huguenots, German Baptist Brethren, Jews, Lutherans, Mennonites, Methodists, Presbyterians, Quakers, and even Anglicans. All 263 paintings are included in the exhibition's accompanying book of the same name, which Kushnir likes to think of as a travel guide to the valley because most of the scenes are on public land and accessible to all.

Pointing at "South Fork, Shenandoah River Bend," Kushnir recalls the laborious process of painting it from an overlook known as Wildcat Ledge, a spot suggested by a park ranger.

"I just knew I had to paint from a place called Wildcat Ledge," he says with a chuckle. "I painted it during August and September 2007, when it was very hot, working on a square foot at a time. I had to affix two bars to the back of the canvas to carry it there. The view that you see is after a difficult trek, but it was worthwhile."

Often, Kushnir never made it to the location he set out to paint, having been waylaid in route by the distraction of another tableau worth painting. The artist frequently took suggestions from others about where to paint, always making a point to ask permission to paint private scenes of property. Most of the time, he says, locals went out of their way to accommodate him.

While working on the bucolic landscape "The North Forks at Red Banks, Shenandoah County" he was approached by a woman who lived on a nearby farm. "She offered me a flip phone and told me that if I ever needed to go to the bathroom, just to push the button and she'd come down and watch my painting for me while I went," he recalls with a grin.

Some of the paintings, such as "Pennsylvania Bank Barn, Bushong Farm, New Market Battlefield," are testaments to architectural styles brought by incoming pioneers from their homelands. Kushnir committed to painting all the major schools in the Valley, many of which are also included in the exhibition.

Senior curator of exhibitions Bill Rasmussen found his inspiration for "Oh, Shenandoah" while considering the works included in the museum's permanent exhibit, "Landscapes of Virginia," which is devoted to works that document the variety of terrain and climates that characterize Virginia's five distinct physical regions. That show includes the Kushnir work, "Sheep in the West Meadow, Valley View Farm" from 2002.

"I had the realization that Andrei's work is as good as all these 19th and 20th century paintings we revere," he explains, referring to works by Rockwell Kent, Edward Beyer and other artists. "The Shenandoah Valley is the epitome of the American melting pot and these paintings allow us to tell the history and geography of the region. It's unusual to be able to do that much teaching in an art show."

"Oh, Shenandoah: Landscapes of Diversity" runs through Sept. 1 at the Virginia Museum of History and Culture, 428 N. Boulevard, virginiahistory.org.