An Architectural Landmark in Church Hill, Now 50 Years Old, Is Fortunate to Have ChildSavers to Call the Place Home 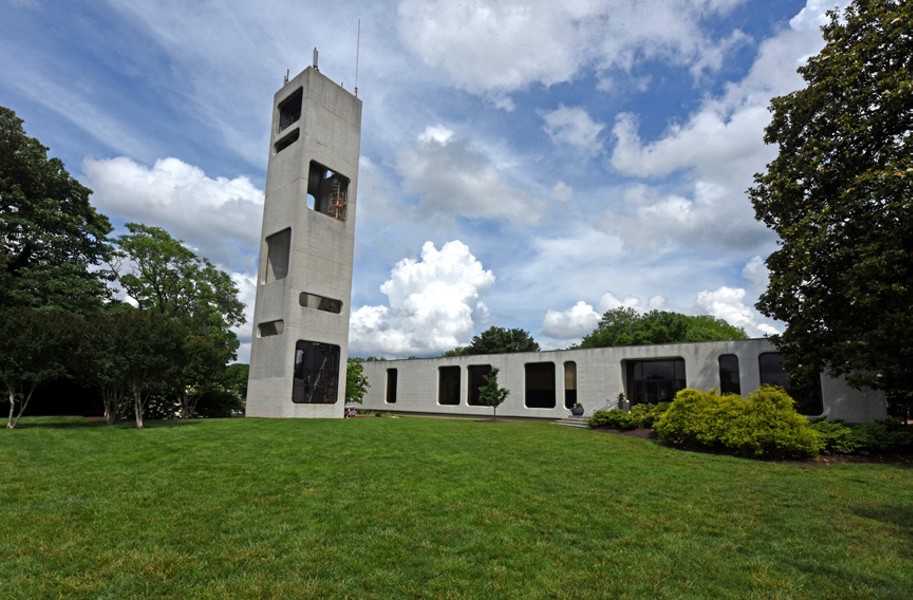 Scott Elmquist The ChildSavers building, designed by architect Philip Johnson, has reigned from its perch on Church Hill since 1968.

Scott Elmquist The entrance from North 22nd Street, much like the building, melds nicely with its much older surroundings.

I attended an outdoor program May 29 to mark the 50th anniversary of a brutally modernist landmark in Church Hill, now the home of the nonprofit ChildSavers.

Commissioned in 1968 as the home of WRVA radio, the two-story white concrete and sprinkled with mica building and its iconic communications tower were designed by the high-spirited American architect Philip Johnson.

When Johnson undertook this Richmond project, he'd become the toast of sophisticated architectural aficionados for such recent designs as the New York Pavilion at the 1964 World's Fair, a new wing for Manhattan's Museum of Modern Art, and both the Dumbarton Oaks Museum and Kreeger House in Washington. His own 1949 home, the minimalist Glass House in New Canaan, Connecticut, long delighted critics.

They all knew that the building's design and prominent location overlooking Shockoe Valley on a knoll at 220 N. 22nd St. was very much about place-making and neighborhood revitalization. The sharply focused restoration of historic Church Hill had been underway for a decade.

But as I settle into my folding chair on ChildSavers' lawn facing Johnson's resplendent temple and tower, I feel a pang of irony. En route to Church Hill for the birthday celebration of this 1960s landmark, I passed the crossroads of Ninth and Broad streets, where a wrecking crane was slugging it out with the last steel beams of another modern masterwork, the General Assembly Building.

That building's western wing was designed in 1964 by the Richmond firm Marcellus Wright Associates. In a wasteful act of hubris, the General Assembly and its clerks screamed "mold and asbestos," to doom the handsome high-rise and most of its adjoining and elegant older building. The replacement no doubt will be efficient. But an exceptional piece of architecture is now dust.

Fortunately, the narrative arc was different from that of the General Assembly Building. Fifteen years ago an enlightened and energetic organization, the Memorial Child Guidance Clinic, which delivered counseling and psychiatric care since 1924 to thousands of area children from sites in Church Hill and other neighborhoods, acquired the complex.

At the anniversary celebration last week, two men were singled out for meritorious service. Board member E. Carlton Wilton initially had challenged the board to raise the money for converting the radio station to a clinic. And Doug Burford, a veteran advertising and marketing guru, was given a shout-out for re-branding the organization ChildSavers, thus giving the 94-year-old organization a moniker equal to the spunk of the modernist landmark it had acquired.

Indeed, if ChildSavers is entrusted with the mental recovery and health of 6,000 children a year, it stands to reason that similarly it has been a worthy steward of this distinguished building.

The two-story building, with one of the stories below ground, underwent an overhaul guided by the Richmond architecture firm Baskervill, which respected Johnson's minimalist intent but injected elements appropriately welcoming to the young clients. "We wanted it child friendly, not childish," says L. Robert Bolling, ChildSavers' executive director.

Interior sight lines and the huge, bug-eyedlike windows remain. But bright colors and cheerful signs have been used strategically. And importantly, upbeat artworks cover hallway walls, adding additional avenues for reflection and delight. It is nearly a museum of top tier, regional artists.

But the exterior remains unique and ChildSavers embraces its setting. Soon after the building's completion, the radio station asked the architect to reflect on what had guided the building's creation.
Johnson wrote: "We decided early… not to make it fit with the older buildings on Church Hill, NOT to copy the old bricks, the old iron trim. … We decided on the most radical material with which to build … concrete! It is also one of the ugliest materials in the world. But just because it was ugly was not a reason not to use it. We wanted to … make concrete that was beautiful."

Many of the children who find their way here via social workers, teachers, police and the courts have been exposed to the most horrific and violent life-shattering aspects of community and family life. It is fitting that just as Johnson created a masterwork out of a rough building material, ChildSavers seeks to transition children from rough times to at least a shot at beauty as they navigate their young lives.

Johnson, who died in 2004, never could have envisioned that his high-profile radio station, designed to help energize a neighborhood architecturally, five decades later would be a place for renewing the lives of children. S