The cultural phenomenon of “Hamilton” comes to the Altria Theater. 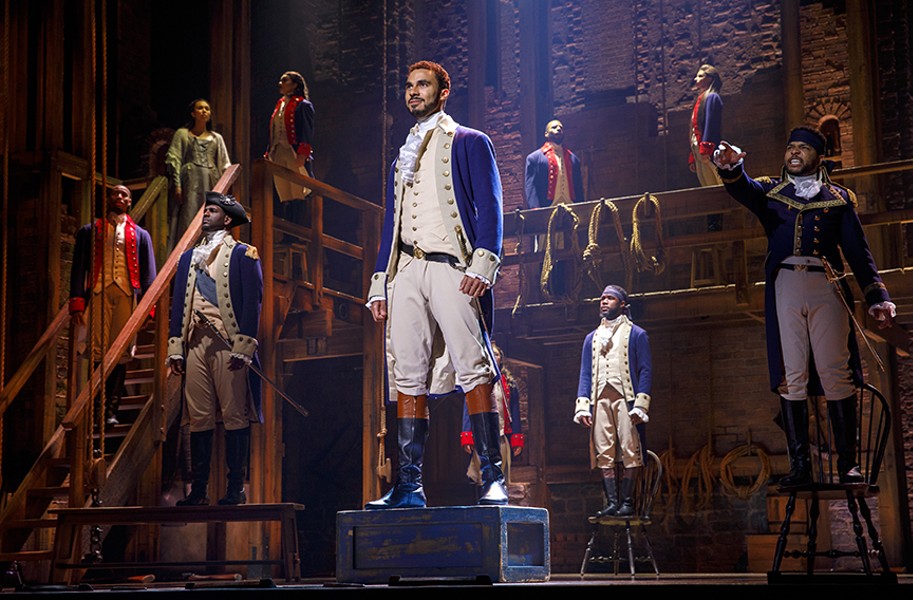 The first time that composer, lyricist, playwright and actor Lin-Manuel Miranda spoke publicly about his Alexander Hamilton musical project, his audience wasn’t sure he was serious.

Invited to the White House to perform music from his first Broadway musical “In the Heights” in 2009, Miranda instead offered President Barack Obama, first lady Michelle Obama and assembled guests a glimpse of what eventually would become the opening number to the musical “Hamilton.” At the time, Miranda believed the song “Alexander Hamilton” would be a part of a hip-hop album titled “The Hamilton Mixtape.”

“It’s a concept album about the life of someone I think embodies hip-hop: Treasury Secretary Alexander Hamilton,” Miranda told the crowd, drawing laughs. “You laugh, but it’s true!”

No one’s laughing now. Miranda’s adaptation of Ron Chernow’s biography of the Founding Father went on to win a Pulitzer Prize, 11 Tony Awards, a Grammy, a Kennedy Center Honor, a MacArthur fellowship for Miranda and just about every other accolade in Western civilization. With its inventive staging, rapid-fire wordplay, hip-hop score and choreography, color-conscious casting of nonwhite actors and pro-immigrant message, “Hamilton” struck a once in a generation nerve and became a cultural phenomenon.

Seats at the start of the show’s Broadway run were so coveted that New York Times critic Ben Brantley wrote it might be worth it for people to “mortgage their houses and lease their children to acquire tickets.” It’s since become easier to see “Hamilton” on Broadway if you plan ahead, and soon Richmond audiences can be in the room where it happens without having to leave the River City. Starting Nov. 19, the Broadway tour of “Hamilton” will set up shop at the Altria Theatre for a nearly four-week run.

Reached by phone in late October from the tour’s stop in Boston, actress Stephanie Umoh says the past year she’s spent on the road with “Hamilton” has been a bit surreal.

“It’s definitely an experience I’ve never had before. I’ve been in the business 10 years and this show is extremely special,” says Umoh, who plays Angelica Schuyler, Hamilton’s flirtatious sister-in-law, in the show. “It’s been very profound, honestly, just traveling around the country and sharing our story.”

Part of that feeling is from the show’s devoted fans, who sometimes dress up as Hamilton, King George or the Schuyler sisters. Umoh says she’s never seen an audience so moved by a show before.

“You have people in tears, you have people jumping up and down,” says Umoh, whose other credits include playing the role of Sarah in the 2009 Broadway revival of “Ragtime.” “Everybody takes away something different. To see their faces when they come out and see how affected they are by the show, it’s really such a marvelous thing.”

In tackling a role in such a well-known show, Umoh says she’s thrilled by the amount of latitude she was given to make Angelica her own.

“What’s very cool about being a part of ‘Hamilton’ is that they give you the freedom to interpret the role and bring yourself into it. That was really important for me coming into this,” Umoh says. “I’m happy that we’re given the freedom to be able to do that.”

As well-oiled a machine as a touring Broadway musical might appear, Umoh says there’s always a human element to theater that can make for a unique experience. Just a week earlier in Boston, Umoh says she was in the middle of the act one closer “Non-Stop” when she hit a hiccup. Halfway through the line “I have found a wealthy husband who will keep me in comfort for all my days,” she suddenly couldn’t remember the lyrics.

“My mind just blanked, and I could not remember what the lyrics were,” she says. “It’s the most bizarre feeling, and it’s very scary in the moment. You just have to get extremely focused.”

To cover, she scatted the rest of the line. Minor mistakes like these are cause for the cast to crack up backstage, she says.

“It happens to every actor on stage, and it’s so funny. I don’t know why we find it so funny. Perhaps it’s because we can all relate to it,” she says, noting the fast pace of many of the show’s songs. “It goes by so fast. It’s like a train that’s just propelling forward, and if you fall off, good luck getting back on.”

For all the honors that have been showered upon “Hamilton” since it debuted in 2015, Umoh says it lives up to the hype.

“You will not be disappointed,” she promises. “There is absolutely something for everyone, and whether or not you connect to hip-hop or rap, the story is so strong, and it’s our story. It’s an American story, and you will learn something.”