An Aloe Saved My Life 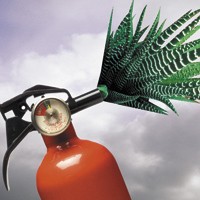 There's a really unusual tale of heroism and sacrifice to come out of the recent California wildfires. While many residents of the San Diego area stocked their yards and gardens with trees like juniper, bougainvillea and grasses that acted as kindling for the massive firestorms, Suzy and Rob Schaefer had spent more than a decade building a garden of (as reported by the Los Angeles Times) agaves, euphorbias and the humble Aloe arborescens around their Rancho Santa Fe home. So that when a loose thread of one of the fires came up the canyon, feeding on palm and other flammable plant life, it was kept at bay by those sturdy succulents.

The fire got to within six feet of the house, Suzy said, but the plants gave up their gel and every drop of moisture to prevent the fire from getting any kind of grip on the house. Across the street, it found an older home that was immolated. The succulents that stood up to the fire melted rather than burned, but apparently only the leaves were affected -- the rosettes at the center were fine.

All of this got me to thinking about how plants might be good to incorporate into your survival strategies for these trying times. Chances are there's a plant out there to remedy any situation. Why, I can just imagine a market for the Ilex karjackerii, which deters auto theft, or the Hibiscus afterskooltutorius, which can teach you to read at a college level, or the Heuchera x 'Tell me how it all began,' a hybrid that offers marriage counseling. Perhaps you're more concerned with staving off disasters physical and environmental in that case, there's a botanical survival kit for you, too.

Maybe we in Virginia are not at a point where we need to start insulating our house with succulent firewalls, but keeping them around is always a good idea. As for me, I love to burn myself on stuff. It doesn't even matter if it's brightly lit; as long as it's hot, I'll go right to it and stick my hands all over it. So keeping aloe around the house is good, too, for stopping burns of the skin and, reputedly, aiding the healing process.

But maybe you're one of those who don't burn themselves, who don't have problems with reading or your marriage or you have a car that can take care of itself — pretty fancy, aren't you? Well, perhaps you never thought about the air you breathe.

The average house gives off a lot of nasty gases from the carpets, paint, adhesives — it might actually be healthier if builders made houses out of badgers and poison-tree frogs. So depending on the age of the home, you could have, as www.greenlivingtips.com reports, benzene, trichloroethylene and formaldehyde coming up from those industrial products, as well as automotive carbon monoxide, all gaseous byproducts of home living. Now we all know that houseplants love the carbon dioxide that we exhale and they require — a bit of reciprocal benefit that justifies the need for a few more spider plants. But as that Web site explains, according to a study by NASA conducted in the 1980s and 1990s, plants like the aloe vera, Chinese evergreen, the green spider plant, dracaenas, gerbera daisy, philodendron and even English ivy are ace at filtering these toxins out of the air we breathe.

So once you've ensured that the inside of the house is safer for you and your descendants, take the paranoia outside and think about all the insects that act as vectors for many late-model diseases. Mosquitoes alone! As http://ladybugplantdoctors.com/Ladybug advises, plant tansy to repel ants and moths, lavender for mosquitoes and fleas, sage and mugwort for moths, basil for white flies and Artemisia absinithium, the infamous wormwood that powers absinthe, to ward off many other insects. The drawback to wormwood is that it will attract depressive painters and sardonic writers to your yard, where they'll loll in the honeysuckle, condemning society and praising the infinite resilience of youth.

That's really only the beginning of your horticultural survival training — there are also plants that control erosion and can keep your house from sliding into some delta somewhere and secretly good plants, like the dandelion, that are remarkably nutritious. But we'll save that for another day. For now, I'm hard at work trying to develop Salvia ripcordia, an herb that doubles as a parachute.