Amid Hopes and Fears, an Iraqi family Puts Down Roots in Richmond 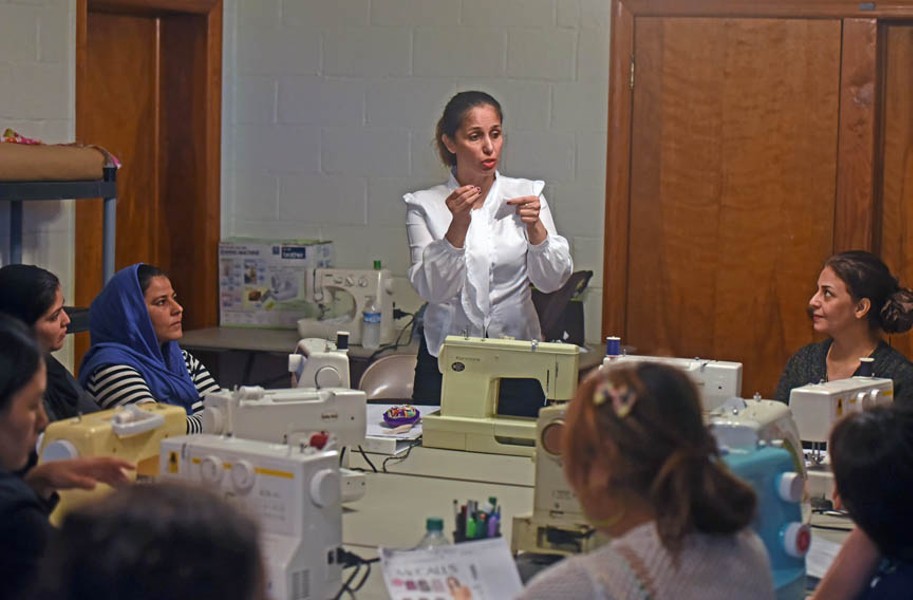 Scott Elmquist Teaching a sewing class in Scott’s Addition, an Iraqi refugee in Richmond says she understands the concern about vetting of people from countries with radical political and religious groups.

In front of her classroom in Scott’s Addition, a 42-year-old native of Baghdad encircles the waist of a student with measuring tape, demonstrating how to make a skirt.

Fifteen women at sewing machines pay attention on a recent Friday, here to develop skills that might land them alteration jobs like the part-time opening at a Richmond bridal shop chalked on a board.

Like their teacher, they’re refugees — from Iraq, Afghanistan and Burma.

Instructor Genan Naifeh studied for six years to teach English, and did so for 20 years before fleeing Iraq with her family in 2013. And while this isn’t an English class, it’s a start — and a chance to teach again.

At the request of Naifeh, Style agreed to change her and her husband’s names for this story. She says their family in Iraq was recently threatened when her husband expressed a political belief on Facebook.

Such safety concerns were why they fled Iraq four years ago.

“Either to be killed or to leave — this is the situation,” Naifeh says. “It was not easy. It was not our choice.”

They’re one of many Richmond families closely watching the re-energized debate surrounding immigration and refugees of Muslim background. Each executive order and court decision is more than just political intrigue. It’s personal — and it’s a concern she understands.

In Iraq, a security guard at the school where Naifeh used to work threatened them. “The gate boy,” Naifeh calls him, an armed young man loyal to a religious sect.

“He came to me and said to tell my husband: ‘Don’t write again. Don’t say anything,’” she says. “To leave his job forever.”

Naifeh’s husband, Hassan, was a journalist and scholar, writing for a political magazine read largely by government employees. “So you can imagine who gave the order,” Naifeh says.

Her husband wrote against Sunni-Shiite divisions within government that are becoming more pervasive, she says.

“If you criticize, you have to be one of them,” she says. “And they will protect you to show democracy. But those criticisms don’t touch the hard points.”

The Naifehs are no stranger to political violence. Hassan’s brother and his sister’s husband both were killed, bombed and shot in their cars, in separate instances.

After the first threat, the family moved to another part of town, but Naifeh continued to teach at her school, unable to transfer at first.

The guard threatened her again.

A few days later, the magazine where her husband worked was vandalized, the offices destroyed. Hassan didn’t return. The family grabbed clothes and went to live with Hassan’s sister. Their two children, now 11 and 12, were kept inside, away from school for a month, while the family sought passage to Turkey.

A bus ride to Ankara and a visit to the United Nations office began the vetting process for asylum in the United States, which took two years and three months. U.N. officials suggested the United States because Naifeh has a sister in Roanoke. The family arrived in Richmond a year ago in March.

The culture shock was immense.

“My apartment felt like a prison,” she says of her family’s first few months in America. And they couldn’t get around well without a car in Henrico County.

She and her husband discussed going back to Turkey, but the Turkish government had shut its border to Iraqi refugees. They were stuck.

Naifeh doesn’t downplay the stress and anxiety of that extended wait, but she understands the strength of vetting measures for refugees and immigrants — they keep her family safe now, too.

“Yes, the process is long, but for our safety, and for the United States’ safety, we accept this procedure,” she says. “I want my kids to be safe.”

She expresses understanding for President Donald Trump’s worry about vetting people from countries with radical political and religious groups, given her family’s experience. “Mr. Trump wants to be sure that the people who come are clear,” she says, “and it is his right.”

Part of her welcomed the executive order that Trump signed Jan. 27, which threw travel from Iraq and six other predominantly Muslim countries into disarray. Once the family gets green cards this month, after a year in America, her husband is eager to visit his 83-year-old mother in Iraq.

“He told me, ‘When I go to Iraq, I will go directly from the airport to my mother’s house and I will stay there,’” Naifeh says. “But of course I don’t believe him, because he misses everything in Iraq. He will go out, I’m sure.”

Her eyes tear up at the thought of her husband returning to their native country. “The danger surrounds him from everywhere,” she says. “Even my kids are very afraid for their daddy to leave. To be in Iraq is not safe.”

She secretly hoped the executive order foiled his plans.

But Naifeh says he’s tortured by his absence from his mother’s life. In their culture, she says, it’s the son whose duty it is to look after his mother, and his mother already lost one son and a son-in-law to violence.

Last week there were reports that Trump intended to remove Iraq from the list of countries where travel is restricted. And Naifeh says she trusts the law to allow Hassan back into the United States with his green card.

It’s the destination she fears most, not the return.

And she knows life in America has been difficult for her husband, who’s still learning English. The family left in a hurry, no time to collect diplomas or documents proving their credentials.

Her husband found work in a meat factory, then Chick-fil-A, and now Ellwood Thompson’s Local Market, where he cleans. He is happy to have work, Naifeh says.

“But he’s 53 and he isn’t used to working with his muscles,” she says. “He’s a journalist and researcher. He used a pen, his hand and his mind.”

Through ReEstablish Richmond, a nonprofit that serves refugees, Naifeh has met friends and clients. She makes alterations for people, and has befriended members of a Quaker community. And the Friday sewing classes at the Scott’s Addition church space have put her in front of a classroom again.

“It is wonderful for me, for my spirits,” she says, with tears in her eyes. “I feel life there.”

Naifeh says the children have adapted better than she and her husband have. They attend Maybeury Elementary School, where they enjoy their teachers and have made friends. But she says her son is sensitive to the news on television and to parental discussions of their situation.

“It’s a bad memory,” she says of news from Iraq. “We lost everything. We miss everything. Because, you know, it’s your life. We were like a tree, and you collect everything but the roots. There is nothing.” S