The lead singer in “The Simon and Garfunkel Story” talks about performing as his hero, Paul Simon. 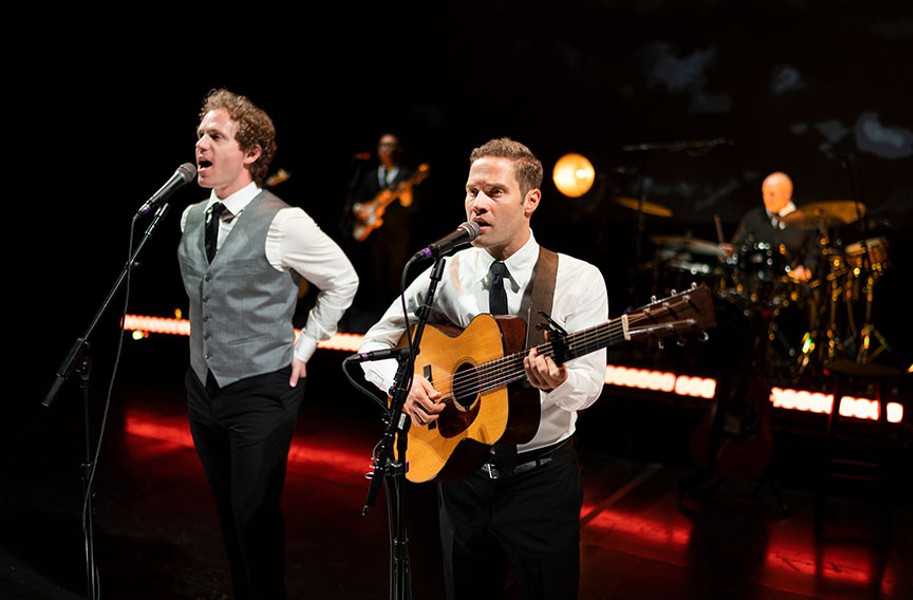 Jukebox musicals, though somewhat derided among critics, have long been a financial boon for Broadway. The term refers to the stage presentation of songs from popular music acts usually shoehorned into a dramatic narrative, such as “Jersey Boys” about the Four Seasons, or “Motown: the Musical,” a template which provides a built-in audience, hence the commercial appeal. Just like Hollywood biopics.

“The Simon and Garfunkel Story,” which started in London’s West End and stops in Richmond for one night on Jan. 9, is more of a tribute show than a musical in that it’s mostly an immersive concert, not a dramatic narrative with scenes acted out. Instead it relies on live performance and between-song anecdotes about the famous folk-rock duo.

It covers the group’s entire career from its humble beginnings as Tom & Jerry, through hit songs and 100 million albums sold, and stopping at the Concert in Central Park reunion show in 1981. Unsurprisingly, it avoids getting into the fact that the two former bandmates can’t stand each other today, with Simon refusing to tour again.

Style spoke with George Clements, the actor who plays Paul Simon, in advance of the Richmond performance.

Style Weekly: How would you describe the show?

George Clements: It basically chronicles their creative work from the earliest songs. We even play a number, “Hey Schoolgirl,” they played when they were 17. In between the songs, we narrate what was going on during their lives and tell the story of their rise to fame. We play about 30 of their songs, so it is more of a concert, but we do give a backdrop.

There isn’t much information online for a show that has toured internationally, how did this start?

It was written by a British man named Dean Elliott who actually played the original Paul Simon. It started in the UK and toured there for four years, and three years ago it came over to the U.S. and Canada.

Have you heard if Simon or Garfunkel has ever seen it?

I believe Garfunkel has, but I don’t think Simon has.

What was your background in getting the role?

I graduated from the Berklee College of Music in 2014 and started a modern bluegrass band called the Lonely Heartstring Band, and we’ve been touring for six years and have released two records on Rounder Records. We decided to take this year off and I had a former teacher named David Newsam who forwarded me the casting call from a New York talent agency. He knew I loved Paul Simon and his work. So I auditioned with 20 other short, singer songwriters and got the gig [laughs].

Paul Simon is probably one of my biggest influences — his lyrics and his melodic sense was some of the best out there. Just a classic American singer songwriter along the lines of Cole Porter, I think he has that same genius: thoughtful, sometimes abstract lyrics. His language mixes the vernacular and the abstract.

How did you prepare for this gig?

I read a Simon biography and delved more into the songs. I already knew 15 of the 30, so I dug into the material. With YouTube it was easy to watch hours of interviews and live performances. In the show, there is no acting involved. I’m not in character when narrating, but when we’re playing the music we are trying to channel them.

I watched the Concert in Central Park a lot, as well as the early performances on late night shows, like “The Dick Cavett Show.” Those were informative. I think they’re both really thoughtful people with poetic natures.

Did you learn much about Simon’s playing style?

Yeah, he plays basically out of all the major key positions — E major, D major, G major, C major, A major, but he just moves the capo around. He’s not a big fan of barre chords, he likes the open strings. There’s a funny lyric in one of his later songs: “I’m an ordinary player in the key of C.” He doesn’t consider himself a great guitar player, but he had his bag of tricks and it was enough to write really beautiful songs that have lasted.

What kind of accompaniment do you have in this show?

I play acoustic guitar and sing — and behind us we have a bass guitarist, electric guitarist, a drummer and a keyboard player. They’re all session musicians from San Diego and Los Angeles. We play mostly the hits but some deeper cuts as well.

The screen behind us essentially sets the song in the time. There might be shots of the Vietnam War or whatever, that set the mood. There isn’t any footage of Simon and Garfunkel shown. … I think this experience has made me a more comfortable performer, playing these bigger theaters, and having to talk. That was the biggest challenge for me, learning the narration, the planned stage banter.

What was the most interesting aspect of their story?

Just their relationship as people. They were childhood friends and to see them grow through fame and deal with success and money. It’s interesting to see them evolve into worldwide superstars. Paul Simon was really the brains behind the operation, wrote all the music, played guitar and sang. Garfunkel just had a beautiful voice — and he was jealous of Simon’s creative abilities, but Simon always felt insecure about his voice and thought Garfunkel was the better singer. In the early years, he felt like he needed Garfunkel … but yeah, we don’t really go that deep into [how things are now].

I think people who grew up with the music can come to the show for a nostalgic experience. It’s a tribute to them. And it’s great for younger generations too, who may have heard the music in their parents’ collections — so they can see it performed in the live setting. A lot of them come away amazed that they have so many great songs.

I feel like it’s my job to reintroduce this music to the world, help keep it alive and give it a fresh voice.

“The Simon & Garfunkel Story” comes to Dominion Energy Center’s Carpenter Theatre on Thursday, Jan. 9, at 7:30 p.m. Tickets start at $44 and can be purchased online at DominionEnergyCenter.com.