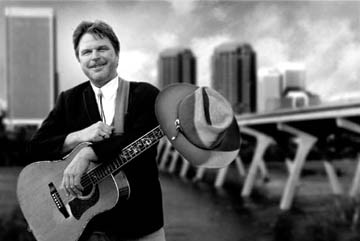 Rounds of Cuervo Gold tequila flowed like water on Thursday at Bellytimber Tavern in honor of the late local musician Page Wilson.

"To Page! Happy trails! ... The world is a lonelier place without you," said Joe Sokohl, a friend of Wilson's who organized the event on Facebook. Wilson died March 15 from natural causes at his home in Mechanicsville. He was 57.

Whether through his down-home guitar and harmonica playing or his long-running WCVE radio show, "Out O' the Blue Radio Revue," Wilson lived for what he called "purebred American mongrel music." His ballad to the state he loved, "Virginia," once was considered for the state anthem.

Since his death, friends have praised his tireless devotion to helping other musicians, his pride in being a self-employed musician and his unwavering support of the local music scene. A member of his inner circle, singer and songwriter Susan Greenbaum, was one of the people he most affected.

"He believed in me," she says. "Musically, I think his voice — his magnificent, resonant, love-laden voice — is what defined him. Not only as a singer but also as a speaker and voiceover talent."

Wilson played free shows in recent years with his Americana group, Reckless Abandon, even when his website indicated he was undergoing serious hardship.

"I'm on the verge of losing my house to foreclosure," he wrote. "If the dog is hurt, the sled don't run. And this dog is hurt right now."

Fellow musician Brad Spivey says Wilson would always invite bands to play with him at Pocahontas State Park and give them the headlining slot, noting that with Wilson, "the show always went on."

Longtime friend and radio veteran Tim Timberlake says that Wilson understood very well the concept of "the theater of the mind."

"That he could make a rustic, comfortable shack somewhere deep in the Chickahominy Swamp an inviting place that attracted roving musicians to sit around the kitchen table making conversation and music come alive was a wondrous thing," Timberlake says. He adds that someone should access recordings of Page's priceless kitchen-table segments that featured an all-star list of musicians as wide-ranging as Delbert McClinton, Townes Van Zandt and the Punch Brothers.

Sokohl, who helped produce the show, says it's uncertain whether the radio program will continue in some form.

Friend Terry Rea knew Wilson since the mid-1970s, when Wilson sang in the basement of Sam Miller's restaurant. He recalled many fond memories, including the time Wilson eulogized the closed Biograph Theatre with a slow and powerful rendition of Woody Guthrie's "This Land Is Your Land."

"Already, I've heard from a couple of old friends who said they had asked Page to sing 'Amazing Grace' at their funeral," Rea writes via e-mail. "Now I suppose they, and the rest of us, will be singing it for him." — Brent Baldwin