Grant Writer for the Alzheimer’s Association of Greater Richmond 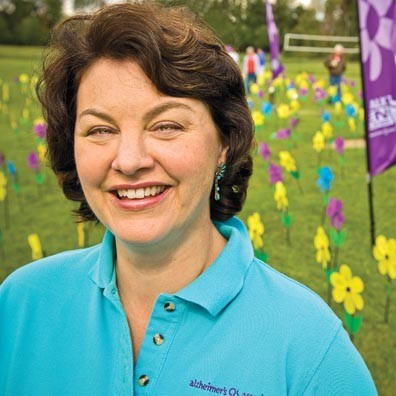 Anyone who’s experienced the loss of a loved one to Alzheimer’s knows how deeply painful and difficult the disease is for everyone involved.

Idaho native Alyssa McBride experienced vascular dementia with her grandmother, Lorraine, though she wasn’t able to assist her mother in caring for her. She was busy traveling the world, first working for state elections in Utah, and then going to Bosnia to serve as an election observer for people who didn’t have electricity.

Her husband, an environmental engineer, moved the family to Richmond for a job, and McBride followed her heart, working first with Habitat for Humanity, then as a grant writer for the Alzheimer’s Association, which she sees as a gift.

“Alzheimer’s Association has only been around 30 years, we’re still young,” she says. “But we have some phenomenal advocates in the community.”

Before the association started its Reasons to Hope Breakfasts, the chapter’s annual fund was about $40,000 a year. Thanks in large part to McBride, the fund and pledges are more than $200,000, an increase of more than 400 percent in three years. The breakfasts grew from 300 attendees who gave or pledged $100,000 in the first year to 600 attendees this year giving or pledging more than $250,000.

As national awareness for the disease has coalesced into a movement, McBride also started a Young Adults for Alzheimer’s Awareness group to help young people dealing with relatives with early onset disease. “It’s very daunting for any caregiver,” she says. And 80 percent of people with Alzheimer’s are staying at home, she says, in part the result of the recession making it difficult to place loved ones in a facility.

McBride offers a message of hope and education. “There is help out there, you don’t have to do it alone,” she says. “They can call our 24-hour help line and get a live person. The more they get education, the better their experience and their care giving.”