"Everything Must Go" looks at the pitfalls of surrendering to the suburbs. 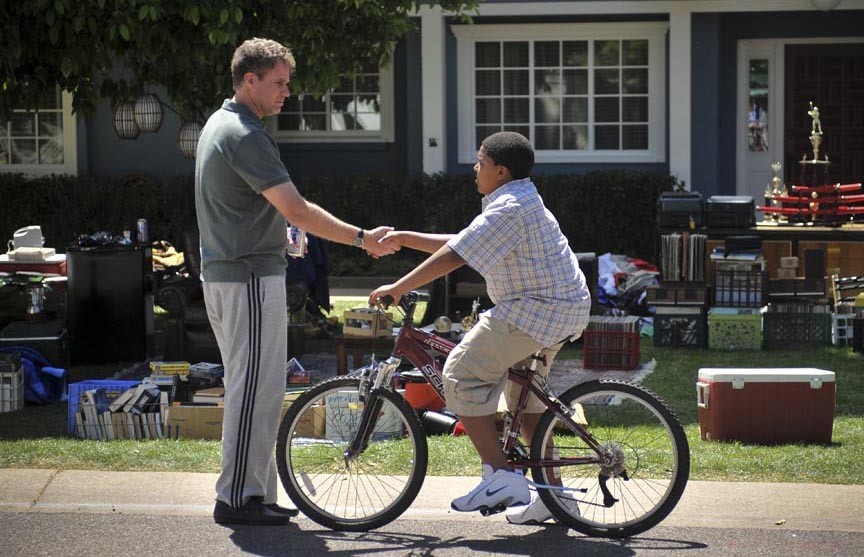 One of the best scenes in the new Will Ferrell movie, "Everything Must Go," a cautionary tale of life in the suburbs, takes place between Nick Halsey (Ferrell) and his new neighbor, Samantha (Rebecca Hall), a pregnant woman moving in while she waits for her husband to make his way to their new home.

Nick is an alcoholic, camped out on his lawn after his wife, whom we never meet, kicked him out of the house along with his possessions. In an insightful bit of dialogue, Nick diagnoses the new life that awaits Samantha and her husband, and it isn't hopeful or kind. It's like he's telling his own story in predicting their future, bringing the film to full circle.

There are a few really nice moments like that in "Everything Must Go," and it's good to see Ferrell play against type, but the movie might have been too ambitious for first-time writer and director Dan Rush. Its basic premise is simply unbelievable, a fact that continuously undercuts well-crafted scenes such as the one above.

Instead of breaking into his own home and calling a locksmith, Nick buys a few 12-packs and makes friends with Kenny (Christopher Jordan Wallace), a fat kid circling his bicycle in front of Nick's house. Nick teaches Kenny sales techniques while they organize a yard sale for Nick's stuff. Nick builds a shower in his backyard, sets up the lawn like a living room, obtains electricity by blackmailing the neighbors, and still manages to teach Kenny how to play baseball.

Though based on a short story by Raymond Carver, "Everything" is one of those screenplay ideas that would have been scotched had someone pointed out one of many easier solutions to Nick's predicament. At the very least Rush could have gone with a title less obviously meant to underscore the movie's themes. This is a level of metaphor that should have been removed from our lives in Screenwriting 101. (R) 100 min. S

Movies everything must go will ferrell christopher jordan wallace