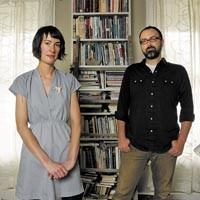 It's rare for two writers — poets, no less — to fall in love and marry, as Joshua Poteat and Allison Titus did in 2004. It's rarer still for each of them simultaneously to have published work enjoying so much national acclaim.

Joshua Poteat and Allison Titus are talented and wise beyond their years. Yet they also know that the success of the poet has very little to do with being a poet. In their case, the approach to the page is interchangeable with and indistinguishable from the approach they take to living the everyday life.

When they're not busy writing, publishing and answering invitations to read their work around the country, they're collecting laurels. Titus' first book of poems, “Sum of Every Lost Ship” (Cleveland State University's Editor's Prize) is due out next fall. Last year she won the Bateau Press Chapbook Prize for “Instructions from the Narwhal.”

Poteat's books include “Meditations” (Poetry Society of America's National Chapbook Prize), “Ornithologies” (Anhinga Poetry Prize) and “Illustrating the Machine that Makes the World” (University of Georgia Press as part of the Virginia Quarterly Review Poetry Series) due in the spring. He was finalist for the 2007 Library of Virginia Book Award in Poetry.

The couple also lends their time and support to the poetry community, judging contests, teaching courses and editing upstart journals such as Andrew Blossom's Makeout Creek.

Both are graduates of Virginia Commonwealth University's master of fine arts program in creative writing, and each has diligently worked copywriting jobs to afford their artistic pursuits.

Their passion for humanitarian efforts is often the catalyst of their creative efforts. They volunteer with Art 180 and Hands On Greater Richmond, a dog farm in Hanover County, and continue to foster many a dog through Mid-Atlantic Pug Rescue.

When the dust finally settles, they share a working space in which they create poems. This is what they must do alone, and yet, they are the first readers of each other's work. Titus has definitive lyrical leanings and pins language in riff-like phrasings to the clothesline of the narrative, while Poteat whispers stories in the reader's ear, using sonorous, long-lined histories punctuated by a granular, detailed witness.

Stylistically, they take different routes toward a shared goal, their independent artistic visions analogous to the philosophy and mission of their partnership.

After losing to Bowie State, a perennial doormat for perennial power Virginia Union University, the men's basketball team went on a run that Timothy Davis, a 6-foot-9 power forward, will never forget.

In March 1992, the team put the loss behind it and went on a winning spree that led to the national championship of NCAA's Division II. For Davis, who grew up with five brothers and three sisters in the notorious Blackwell housing projects, the championship only affirmed something his late father told him years before.

“We didn't have a whole lot of money,” Davis says. “We lived in a two-bedroom apartment in Blackwell.” But his father told him to ignore it all, he recalls: “Don't ever stop dreaming, no matter what your surroundings look like.”

Davis, a family counselor, tries hard to impress the dream on his pupils — mostly inner-city youth with legal troubles, anger-management problems and attention-deficit disorders. “It's our duty and our job to let these kids dream,” says Davis, who started his firm, Family Maintenance Counseling, three years ago. “Without knowing a dream, there is no hope.”

Basketball? Davis parlayed his career at Union into an education and an overseas professional hoops career. He's played in Germany, Yugoslavia, London and even Brazil, where he lived in Rio de Janeiro. Just imagine: A kid who grew up in the projects living and playing basketball in Rio.

“That's where it all starts,” he says, “It starts with a dream.”