Three kinds of meat, four sauces and a beverage list that any bar would be proud of, Fatty Smokes appeals to a broad audience. 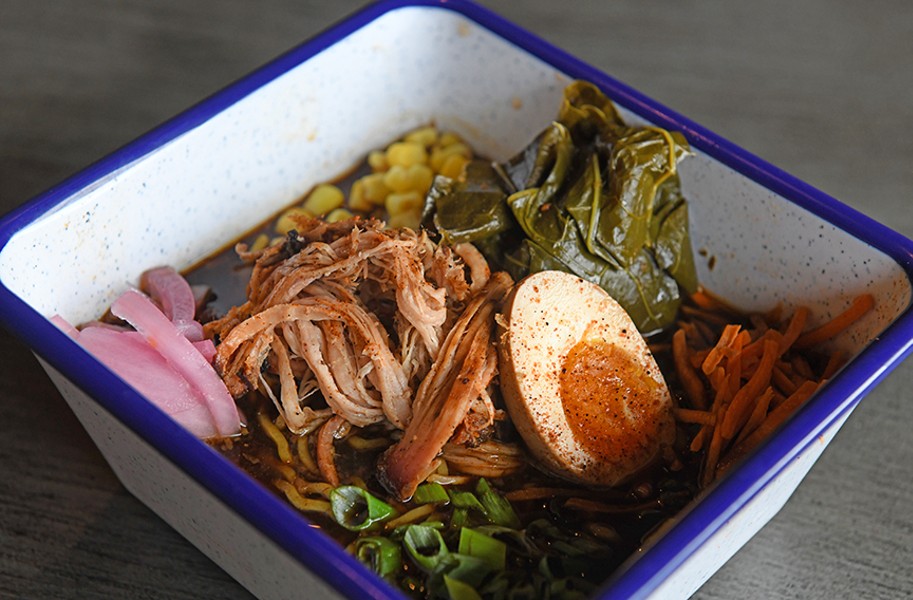 The classic barbecue joint isn’t fussy. The napkins are paper and plentiful, the smoky aroma of hickory hangs in the air, and the art on the wall, if there is any, often defies the definition of art. Beverages might include beer and sweet tea, but how often does a barbecue joint serve cocktails? Desserts, if there are any, tend to be a limited selection and often made elsewhere. This is all justifiable, because the focus of a serious barbecue restaurant is on the barbecue.

Imagine a barbecue spot where the atmosphere is urbane and witty, the servers are smart, informed and make eye contact, the sides are just as creative as the mains, and the beverage list is expansive. When Fatty Smokes, in the heart of downtown, claims it is “elevating the barbecue experience,” it isn’t just spitballin’. It seems like Fatty is trying to be all things to all people. It comes impressively close.

From the giant three-dimensional hog’s head on the wall, made from a few hundred shoes in bright colors, to the carpeted ceiling that allows diners to actually converse, Fatty Smokes — open less than a year — hits its mark.

Like any top-flight barbecue restaurant, Fatty Smokes isn’t wedded to just pork. Fatty smokes chicken and brisket as well, offering all three in unexpected presentations that include Virginia, North Carolina, Kansas and Memphis styles of barbecue. The menu is so innovative and open-minded that purists have about a half-dozen options for plain, straightforward barbecue. At the other end of the spectrum are dishes like Fatty’s ramen ($10) which combines carrots, corn, and collard greens in a smoked-pork broth with pickled onions, scallions and a marinated egg. Is there such a thing as too innovative?

Over our visits, the brisket tacos ($10) stood out. These come as two flour tortillas piled high with lean slices of brisket and mixed cheeses, perked up with spicy ranch and green tomato pico de gallo. As pleasing as that blending of tastes and textures, crispy fried onion straws give the tacos another dimension.

The best part of the whole experience is that prices are reasonable. Day or night, the menu is the same. Most entrees cost $10 or $11, the exceptions being the Pig Poppa — pulled pork, smoked sausage, slab bacon, slaw and Kansas City barbecue sauce on toasted jalapeño cornbread — and the El Jefe — chopped beef brisket, beef hot link, pickles and fried onion straws — both of which come in at $14. If your party is four or more, the Shorty, featuring a pound of brisket, smoked Virginia country sausage, beef hot link and a half rack of spareribs, is a good value at $50. Our party of three didn’t come close to finishing. Given those calculations, who knows how many the Notorious Feast satisfies with a dinosaur beef rib, a full rack of spareribs, a pound each of brisket, smoked turkey breast and chopped pork, a smoked Virginia country sausage, a beef hot link, and half of a smoked chicken? At $135, we figure the Feast can serve at least a half-dozen and probably more.

But back to the elevated experience. …

We have one observation that doesn’t rise to the level of complaint: A few things are misidentified on the menu. Our order of cheddar cornbread popovers weren’t popovers at all but rather minimuffins: delicious but disappointingly not popovers.

Desserts ($7) all sounded exceptionally interesting, making choices hard, so when one of our choices fell short, we were less forgiving of such mix-ups. Peach cobbler bread pudding couldn’t seem to decide which it wanted to be. But the mixture of caramelized peaches, bread pudding that had been fried, vanilla ice cream and salted caramel sauce was so good that we didn’t care what they called it. On the downside, the Double Dank Chocolate Cake was regrettable. The few small balls of cake were so dry they crumbled, and the chocolate ganache that might have saved it wasn’t ganache at all but rather a pourable chocolate sauce. We told our server of our disappointment, and within minutes the manager was tableside to apologize and assure us that it would be removed from our bill.

It’s hard to imagine a demographic that Fatty doesn’t serve. Bottom line is, if you like barbecue, booze or beer, there’s something for you at Fatty’s. If you believe that it’s possible to be all things to all people, Fatty Smokes is mighty close.