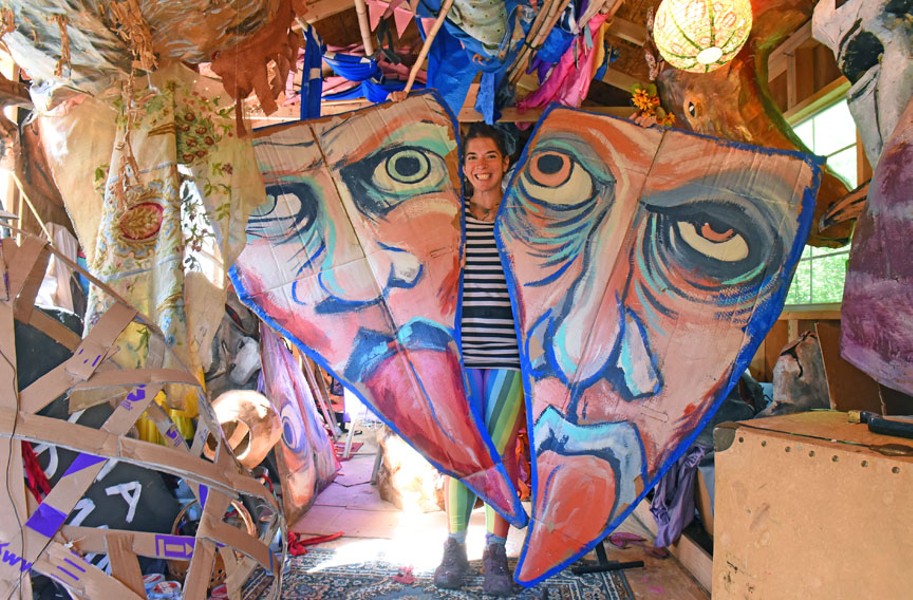 Scott Elmquist Lilly Lamberta stands sandwiched between two of her large-scale puppets in the workshop at her home off Forest Hill Avenue.

The route has never changed. Participants gather in Monroe Park, or this year, because of construction, in front of the Altria Theater.

Marching will be a 15-foot puppet of Harriet Tubman illuminated from inside with black lights and glitter, the better to resemble a statue suitable for Monument Avenue. Also puppets representing activist Angela Davis and orator Frederick Douglass, along with a section devoted to the Black Lives Matter movement and a section for dreamers marching with a large Mother Earth puppet.

Then promptly at 7 p.m., the No BS Brass band leads this circuslike parade down Laurel Street into Oregon Hill with the Zombie String Band bringing up the rear.

Even before the protests and counterprotests in Charlottesville, ringleader Lilly Lamberta was busy planning the main political statement: a funeral for the Confederacy.

After three years apprenticing and touring with Bread and Puppet, a politically radical puppet theater group established in the '60s, Lamberta's mentor told her to return to Richmond. Here she formed All the Saints Theater Company, resolving to do a tall Halloween parade, with puppets 10 to 15 feet high, focusing on a political statement.

"I wanted to use puppets for my activism, using the magic I learned with Bread and Puppet here," she says "Now there's a big push to be political with all art, but that was always my intent." The first Halloween parade in 2006 attracted around 60 attendees while last years' turnout was closer to 1,800 people.

Humor is Lamberta's weapon, registering politics in a way that is part pageantry, part vaudeville and all energy. She wants to present hard issues without aggression and more in the context of a circus. "We try to make it jovial if anything, because people need that more now," she says. "It's a safe, fun way to poke fun at really old racist ideology."

In order to pay homage to key issues and figures while simultaneously inhabiting "the silly world," as Lamberta calls it, she'll include animals against racist humans (bigger puppets of owls, buffalo and raccoons) and slices of white supremacist pizza carrying tiki torches, with puppet mouths representing people and institutions opening up hungrily behind them.

"Satire can be a hard modality for people," she says. "But we need to get through the unknown to where we can have conversations that may be out of our comfort zone."

What will the funeral procession look like? There's a skeleton horse carried by masked people representing Confederate soldiers with picket signs reading, "not our war," as well as a mermaid skeleton puppet ensnared in a black snake that represents the Atlantic Coast Pipeline. Modeled on Hieronymus Bosch's "Garden of Earthly Delights," one section of the parade is devoted to the imperial presidency, as Lamberta refers to the current administration, and King No One, who resembles Jabba the Hut.

A more hopeful section is the Bones of Resistance that celebrates the possibilities of tomorrow. "The message is that we'll only heal the horrible pain of racism by taking claim to our history and celebrating those who've stood up for justice all along," she adds.

"What we've been seeing recently is the last sighing breath of a group who thought they should have supremacy over the rest until the end of time," he says. "All this hate and violence is them lashing out like a wounded animal that knows the end is near. They're in the minority now. It's past time to bury the past. It's time to march forward fearlessly into the future."

Lamberta's puppet barn houses 12 years' worth of puppets. Each fall core company members Marcus Fioravante and Sid Warters join her and spend two months crafting new pieces to suit the theme and repair old costumes being re-purposed. The result is about 100 puppets of varying sizes and weights along with a variety of signs that need people to carry them. Seasoned parade veterans know to show up around 6:30 p.m. to claim the pieces they want to carry. Costumes are optional but encouraged.

In the barn, Lamberta is the master puppeteer, while at the parade, she's the grand marshal in a top hat leading the masses. As such, her dream moment came the year the Varina Blue Devils drum line unexpectedly showed up.

"Every year I gamble on people's willingness to participate," she says. "But it's important to take to the streets when coming together in hard times. We shouldn't shy away from real issues." S