Quill Theatre’s “The Great Gatsby” is full of music, dancing and comedy set against one of the great American stories. 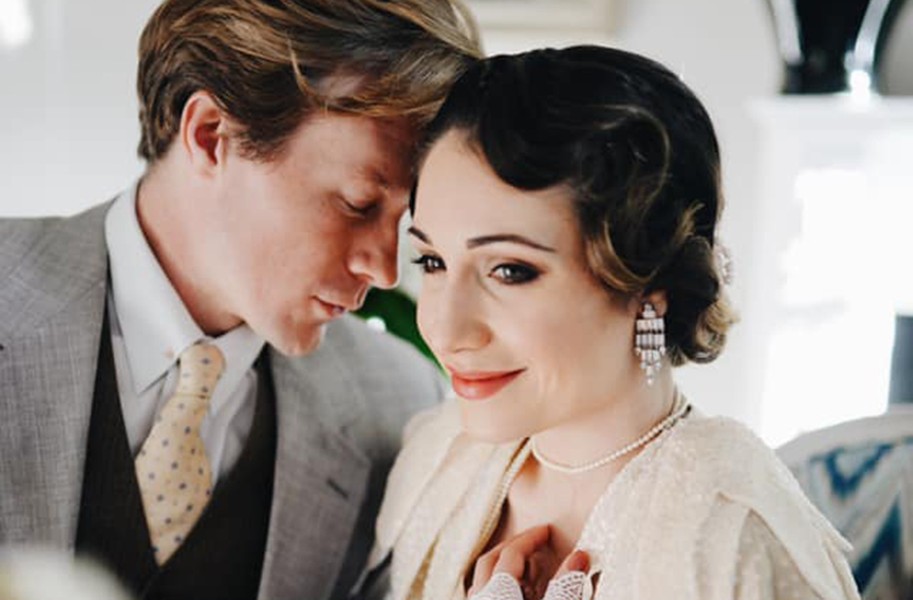 Lavish “Great Gatsby”-themed parties have become a popular trend since the Great Recession, but F. Scott Fitzgerald — a man who once called Princeton University “the pleasantest country club in America” — would likely find this fad rich with irony.

His novel was intended to condemn the era’s extravagance, and you don’t have to be an English major to realize that there’s a cost to all this excess by the close of the book.

Still, it’s hard not to be seduced by the era of flappers, hot jazz and cold cocktails. Everyone looked great, fashions and morals were looser, and the sudden availability of the automobile meant that couples could easily escape for a quick make-out session whenever they wished.

It’s against this backdrop of indulgence that Quill Theatre is mounting Simon Levy’s adaptation of Fitzgerald’s magnum opus.

The year is 1922, and Yale University alum Nick Carraway has come to the Long Island village of West Egg to seek employment as a bond salesman. There, Nick witnesses Jay Gatsby’s efforts to woo Daisy Buchanan, the woman he fell in love with before going overseas in World War I. Daisy has since married, but Gatsby is undeterred, and has accumulated massive wealth in order to pursue her.

“He sets as his goal to win her back because they are meant for each other,” says Jan Powell, director of Quill’s production. “He hatches this whole scheme. He builds a mansion across the sound from hers and sets up a meeting to try to woo her back.”

Considered a contender for the great American novel, “The Great Gatsby” wrestles with the American dream values of prosperity and upward social mobility.

“It really strikes a chord with Americans because it shows how potent the American dream is, not just the home and family, but also the ability to pursue wealth and the ability to re-create yourself, to be able to become what you’ve always dreamed of being,” Powell says. “Underneath that, there’s a hollowness, and corruption can reach into the falsehood of that self-constructed image.”

“It’s very deftly done. It retains some of the most beautiful language from the novel and gives it to the character of Nick,” Powell says. “It does maintain that feeling of being a real mood piece, a real memory piece, looking back on a time that was so important in your young life it still kind of haunts you.”

Chandler Hubbard, who plays Nick in the show, says “The Great Gatsby” is “a fish out of water story about the … ugliness underneath the glossy exterior of wealth, especially in 1920s America.”
In portraying the show’s narrator, Hubbard says he’s worked to flesh out elements of his quiet, reflective Midwestern character.

“One of the challenges that Jan and I have been working on is how to make a character who is onstage for nearly the entire show not just a passive recipient of the story, but an active engager in the story,” Hubbard says. “He’s mainly a witness to a lot of despicable deeds.”

Playing Daisy, local actress Rachel Rose Gilmour says she identifies with her character, and that she disagrees with those who tend to interpret her as shallow and selfish.

“She always resonated with me, and I believe I understand Daisy very well, and I’m so grateful to be able to bring her to life,” Gilmour says. “Daisy is this wistful being who is just filled with deep sadness and emptiness, and really all she wants is for things to be beautiful and happy.”

Powell says she and Gilmour are endeavoring to portray the dueling forces that Daisy is caught between.

“She’s doing a beautiful interpretation of Daisy,” Powell says. “[Daisy is] kind of in a gilded cage. She has very limited choices of what she can do with her life, and she tries to do the right thing, and it always leads to the place where she’s yearning to do something different.”

With dancers making up nearly half of the show’s 19-person cast, Powell says that period dances like the Charleston and the foxtrot will be an integral part of the show and serve as a form of social commentary.

“We have worked to maintain the feeling of the Jazz Age, the Roaring ’20s, when there was this new freedom that everybody felt,” Powell says of the show. “It’s full of music and dancing and comedy, juxtaposed against one of the great American stories of all time.”