The Barksdale wins with a vintage comedy. 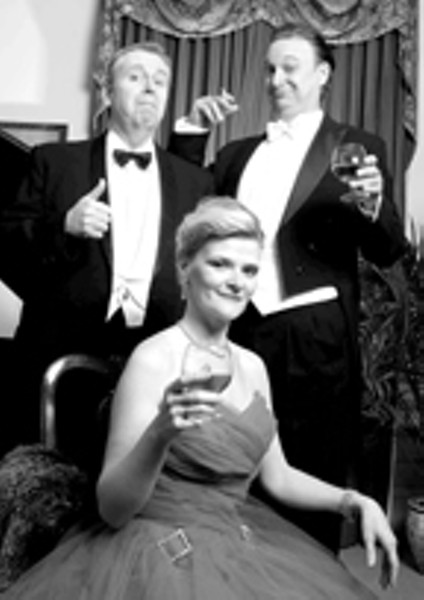 The script is an exercise in theatrical wish-fulfillment. A young playwright, Peter Sloan (Derek Phipps), is exposed to the frivolous world of producers, directors, and performers. These people gush about him before his play opens in Boston. But when things don’t go so well, these same people plunge daggers into him. Sloan gets an opportunity to stand up to them, demonstrate his integrity and triumph over the hypocrisy of show business. In other words, the play is utter fantasy.

The cast tears into this material with abandon. The play takes place in the hotel suite of the leading lady, Irene Livingstone (Julie Fulcher). Irene is the epitome of showbiz self-absorption. Fulcher tosses her hair so many times you’ll wonder how it’s able to retain its shape throughout the entire show.

As Carleton Fitzgerald, the director of the show, David Bridgewater chews up scenery as fast as he can get to it. He vamps around the stage making grand pronouncements about “drama.” Later when he perceives a slight, his chin quivers with seismic anger.

The producer Sydney Black (Matthew Costello) is a study in nouveau riche. As a performer, Costello has always appeared to take his cues from the other actors on stage. But here, he creates a larger-than-life character that depends on no one. In fact, the play’s center of gravity shifts unexpectedly to Sydney and his ditzy-like-a-fox wife, Frances (Jennifer Massey). Their exchanges are some of the best in the show. It helps that Massey can fire spitballs with the best of them.

Irene’s mother, Stella (Jolene Carroll), has seen it all. During a closed rehearsal, she sneaks into the theater as a scrubwoman, watches the play and later pronounces it a disaster with Agnes Morehead-like venom.

Those of you with a taste for comedic archaeology will marvel at the nonstop humor produced by this show. Sure, modern comedies tend to be edgier and more socially relevant. But the ability to write gags has deteriorated over the years. At one point, Sloan’s play is euphemistically described as an “allegory.” The description gets funnier as it is repeated throughout the evening. Contemporary playwrights still have repetition in their bag of tricks but they rarely seem to use it with such effectiveness.

We know how much these characters crave attention because of David Crank’s period costumes. His excellent designs run the gamut from glitzy evening wear to wine-colored pajamas and fuzzy mules. There’s one final costume surprise near the end of the play: Bridgewater’s floor-length robe is so extravagant that he appears at times to be a giant Kabuki dancer.

The play runs two-and-half hours (including two intermissions) but you won’t notice the length because of Terry Burgler’s masterful direction. He blends scrupulous attention to detail with a whiz-bang pace that exploits the material for every possible laugh.

So watch an expert cast light up the Barksdale stage and learn something about the devolution of American comedy. Perhaps contemporary playwrights should rummage through antique shops in search of vintage typewriters. It’s difficult to imagine dialogue this funny coming out the other end of a word processor. S

Continues through March 7. at the Barksdale Theatre. Tickets cost $34 and can be purchased at the box office, 282-2620.