Henley Street Theatre's "Signs" is a one-woman walk on the wild side. 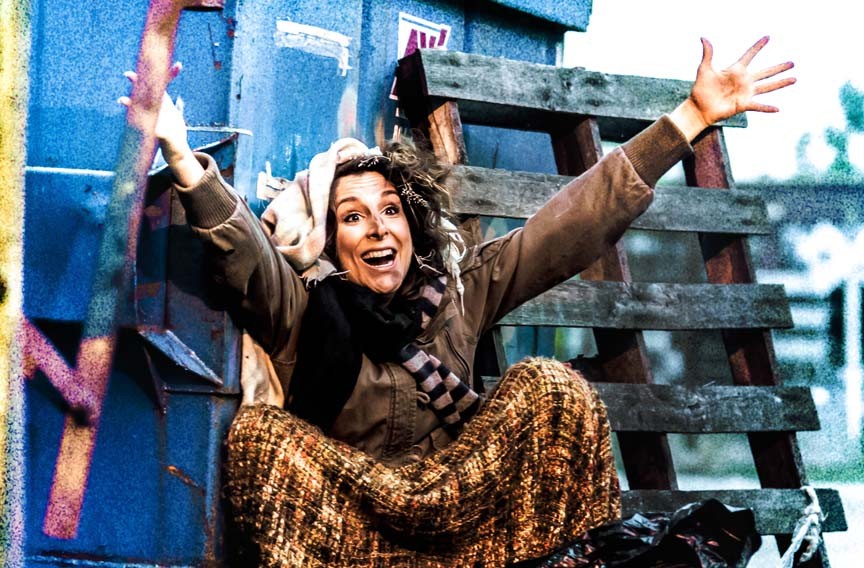 With its prostitutes, yuppies, drug addicts and bag lady, Jane Wagner's "The Search for Signs of Intelligent Life in the Universe" gives a wide panorama of life here on earth.

"Signs" originally starred Lily Tomlin, who won a Tony award for her portrayal of more than a dozen characters in the one-woman show. Following in the footsteps of Tomlin isn't the easiest task, but Henley Street Theatre has wisely picked the immensely talented Eva DeVirgilis to star in its production at CenterStage.

The show unfolds through the eyes of Trudy, a New York bag lady who proclaims that she is trying to help aliens understand humans. The story then bounces back and forth between Trudy and an array of inter-linked characters. DeVirgilis, continually altering her hairstyle and body language, does a wonderful job meeting the demands of each character.

From her exaggerated face and stance as Trudy to the upper-crust intonations of Kate, a bored lady who lunches, she quickly shifts between characters without a moment's pause. DeVirgilis' only slip-up comes in her portrayal of Brandy, a prostitute. While excellently acted, the character's New Jersey accent fades in and out during her scene.

The way that Wagner's script melds these seemingly disparate stories in the show's second act is admirable, but perhaps includes a character or two too many. It's worth noting that she goes the extra mile to focus on characters who don't always get a voice in the theater. The script portrays both the disco-loving meathead Paul and the clueless aerobics girl Chrissy as fully realized characters and notably puts the majority of its focus on the show's females.

Laine Satterfield's direction highlights both the humorous and dramatic elements of the show, though it's sometimes hard to distinguish between characters in the show's second act: Again, less may have meant more. Andrew Bonniwell's lighting design takes advantage of the show's varied scenes, lighting Agnus from behind in crimson during her performance-art piece or flashing different colors when Trudy receives a psychic vision.

While its references might be dated and its message of hope in the face of death and abandonment is never completely explored, "The Search for Signs of Intelligent Life in the Universe" is certainly an entertaining night of theater — one that even aliens might enjoy. S

Henley Street Theatre's "The Search for Signs of Intelligent Life in the Universe" plays through Dec. 31 at Richmond CenterStage, 600 E. Grace St. Call 800-514-3849 or visit henleystreettheatre.org for tickets and information.