A chat with Nahuel Frúmboli, 30: flair bartender at Off the Hookah. 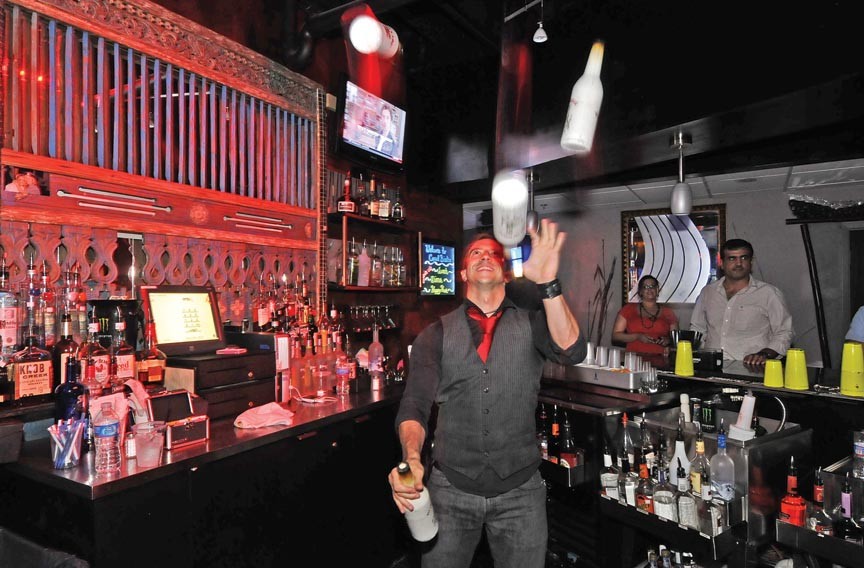 On his inspiration: "I'm a showman. I like to be onstage. Under the spotlights. I started this kind of profession for Tom Cruise — for the "Cocktail" movie. I watched that movie ... and then I went straight to the newspaper to find a place for learning. And I found a place called Cocktail University. And that's where I went."

On logging the miles: "The first step from Buenos Aires was straight to Madrid for working the Hard Rock Café. I worked at Bar Academy in Paris, one of the most popular places for flair bartenders and mixology in France, and doing professional competitions all around Europe."

On getting Hookah'd: "I was working in flair bartender school in Spain, in Murcea, for a club. And a friend of mine who is one of the bar managers at Off the Hookah in Fort Lauderdale, he contacted me because he needed a flair bartender here in Richmond. So I say, OK, let's go!"

On the transition here: "I was moving all around Europe for the last 12 years. ... So for me it was like one more time."

On the job: "I work here every Thursday, Friday and Saturday from 7 to close. The rest of the week is just for myself. Go the gym, and practicing — now, for a national flair competition in Las Vegas [with the United States Bartenders' Guild on July 30], and the winner of that competition represents the U.S. in Beijing. I was already in the world finals representing Spain, in Berlin and in Singapore."

On his pet peeve: "I hate plastic cups."

On Richmond bar culture compared with Europe: "The interaction is cool, people go out to have fun. What I've found here is that the people like to go out, or hang out in a bar for getting drunk most of the time. There, no. There, it's more like enjoy it, or have fun.... Here, it's give me the strongest you have. It's a difference of culture."

On his specialty drinks: "I'm a flair bartender, but before that I'm a mixologist. I love cocktails with fresh fruit — real things, you know. I prefer to do martinis. I like to use fresh fruit, different kinds of liquors, syrups, juices. I like to play with flavor."