A musical exhibit at the Virginia Historical Society explores revolutionary songs of change. 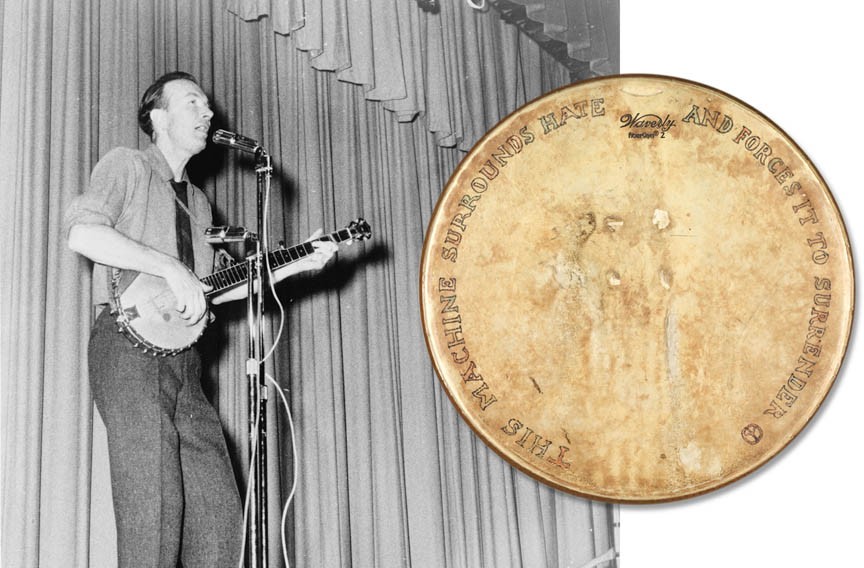 Music shapes memory, providing a touchstone for life's important moments. Songs conjure up people, experiences and travels in our past. So it is with cultural memories, and never more so than during traumatic times in American history.

The Virginia Historical Society's compelling new exhibit "Revolutions: Songs of Social Change, 1860-65 and 1960-65" looks at the music that touched us as a people during two particularly dramatic periods, the Civil War and the Vietnam War. Using musical instruments, album covers, sheet music, photographs, and audio visual stations where visitors can hear the music, the exhibit presents several standout objects.

Folk singer Pete Seeger's banjo head, the one he played for more than 40 years, is on loan for the first time from the Rock and Roll Hall of Fame and Museum. Inscribed with "This machine surrounds hate and forces it to surrender" along with a peace sign, it feels like a civil rights-era talisman, able to imbue Seeger with the power to sway any crowd, no matter the size or disposition. Similarly, a handwritten copy of Julia Ward Howe's "Battle Hymn of the Republic," based on the tune of the then-popular song, "John Brown's Body," a favorite often sung by Union soldiers, is as likely to give a thrill to history hounds as to music lovers.

Based on six themes — ballads, Dixie, freedom, spirituals, sentimentalism and patriotism — the exhibit demonstrates how each is used in difficult times. Sentimental songs tug at the heartstrings during periods when loved ones are far away, while freedom songs sustain morale among activists while conveying commitment to freedom and rights for all.

"It was a political revolution in the '60s fighting for equality. It wasn't just all black musicians, either — whites were joining the struggle for equality," says Lauranett Lee, curator of African American history, while noting pictures of Bob Dylan and Peter, Paul and Mary.

The exhibit originally was envisioned as a way to display the museum's extensive collection of Civil War-era sheet music. But the focus widened with the partnership of the Martin Luther King Jr. Memorial Commission.

"We have a copy of Daniel Decatur Emmett's sheet music for 'Dixie's Land' and it's one of the prized possessions of the Virginia Historical Society. We wanted to have it on display but we didn't feel Civil War music had a broad enough appeal," says Andrew Talkov, head of program development. "So we thought of other ways to interpret music and found a repeating theme. 'Dixie' was the unofficial national anthem of the Confederacy, but it wasn't written for that. It was originally a minstrel song. Bob Dylan's 'Blowin' in the Wind' was originally a slave tune, 'No More Auction Block.' Both songs had been written for different purposes."

Every song featured in the exhibition can be heard. Visitors can listen to two versions of "Dixie," a traditional one sung by an unknown artist and a Confederate version performed by, of all people, Seeger. And while hearing him sing Dixie may perplex some, the recording makes a case for him as the nucleus of the exhibit.

"He was a musicologist, collecting folk songs for the Smithsonian," Talkov explains. "Hearing him sing 'Dixie' makes you think about what the interpretation and responsibility of the songwriter and the singer is. Banjo playing is at the center of this story. The banjo was adapted from African instruments by slaves, but the way it was played by whites and adopted by them means that it's now considered an American instrument. It's at the center of all this, too."

Songs as wide-ranging as Tom T. Hall's anti-communist "Hello Vietnam," Joan Baez's version of the civil rights movement anthem, "We Shall Overcome" and the Civil War-era "Richmond Is a Hard Road to Travel," form the core of America's background and identity.

Like everything else, music has a past. "This is all about how listeners interpret it. We don't want people to just listen — they need to think and talk about it, especially among different generations" Lee says. "What did it mean when it was written and what does it mean now?" S