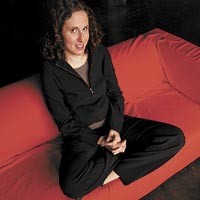 Already a successful photographer when she moved to Richmond at 25, Aimee Koch was impressed by Richmond's art scene and immediately decided to get involved. After volunteering and working at 1708 Gallery, she accepted the position of manager of development at Art 180 in 2007. With a bachelors degree from Amherst College and a masters degree in fine arts in photography from Washington University, Koch's talents had already allowed her to live and work in Copenhagen, New York and Paris.

While Koch primarily works behind the scenes at Art 180 helping with public relations and writing grants, the results of her desire “to bring the passion of art to kids,” as she puts it, shines at the forefront.

As a visionary behind Change for a Ten, a call to action celebrating Art 180's 10th anniversary on Oct. 10 (www.art180.org/ten), Koch's work has helped bring the community together. “It's a really neat project for everybody to recognize that they have a voice that can be found through the empowerment of art,” she says.

Koch has shown her own edgy, provocative photographs in dozens of solo and gallery exhibitions locally and nationally and has recently served two terms on the board of the Virginia Museum of Fine Arts' Friends of Art. “A lot of my own personal work deals with fine lines and contradictions,” she says, “the fine line between ugliness and beauty.” Her photographs can be seen at www.aimeekoch.com.