After time in New York, keyboardist Calvin Brown becomes in demand in Richmond 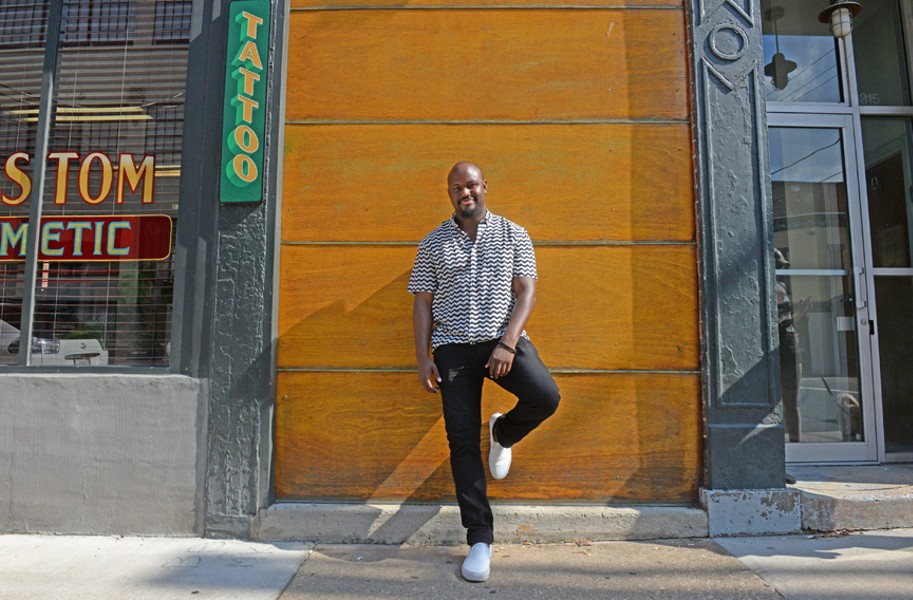 There was apparently a Calvin Brown-shaped hole in our music scene.

For more than a year, the pianist has been popping up everywhere, either on the bandstand or in the audience. Notably, he's been a regular keyboard player for three of the area's top singers, holding down the intimate duet half of Sam Reed's dazzling salute to Nina Simone and backing her Sharon Jones tribute. He's also in the breakout bands of Kenneka Cook and Angelica Garcia. In recent months he's been leading from the front with the neo-progressive-soul of Calvin Presents, scoring an opening slot at the Richmond Jazz Festival.

Not a bad start for an artist who returned to his hometown burned out from the tooth-and-claw scuffle of New York, afraid that his career might be over.

His artistic path started in Glen Allen's Mount Olive Baptist Church when he was just 13. "I played 'Brighter Day' by Kirk Franklin," Brown recalls. "I took a solo, which was really unorthodox, and the people just went really crazy. It was kind of my debut, a very powerful experience, and I never looked back."

He played well enough in the band at Atlee High School to be selected for the Greater Richmond High School Jazz Band. He ricocheted between colleges, starting at the New School in Manhattan, then briefly to Virginia Commonwealth University, then to Berklee School of Music, whose full scholarship he'd initially turned down. He graduated with a degree in film scoring.

"I wanted to learn how to make music myself," Brown says. "Producing, arranging, orchestration. Playing came kind of naturally but writing is another skill. The irony is that while studying theory and technique, the only thing I could think about was writing songs."

After college he spent three years in New York, playing with budding singers like Jazzmeia Horn and Melanie Charles, and touring Europe with charismatic saxophonist Lakecia Benjamin. "In some ways it was great, but that city can eat you alive," Brown says. "You have to do a lot of things you don't want to do just to survive. And everyone is screaming: 'Look at me! Look at me!'"

Coming back to Richmond initially seemed like a retreat. "I was depressed, I had this feeling of loss." But soon Mark Ingraham scooped him into Dance Candy; a multigenre mostly cover band with a long-running Thursday night gig at F.W. Sullivan's and a regular payday from weddings and corporate events. Maybe more importantly, it also had Sam Reed. "She was the first person I really connected with," he says. "I love her so much."

The feeling is mutual. "Calvin Brown is a genius," Reed says, "and a challenge. In working with him, you need to work hard and step your game up. You will grow and learn — and he doesn't even realize he's teaching."

Brown spent much of the first half of 2017 in Hong Kong with trumpeter Omar AbdulKarim. "It was really good to get away and rethink some things. Just being in a place where everything is foreign lets you know who you are. I think when I came back I was much more focused. I started going to everyone's shows."

Soon he connected to Kenneka Cook. "She didn't have a band yet, she was doing her solo looper stuff. I would always be at her shows, singing harmony," he recalls.

Again, it was mutual. "I was a fan of Calvin's music before we started working together," Cook says. "Actually, it was before we officially met. Now I'm blessed to have him in my band and to be a part of his art."

The same is true of Angelica Garcia. Brown caught her "otherworldly" act at Hardywood Park Craft Brewery. Now he is not only in her band; they're roommates.

"Calvin always amazes me," Garcia says. "His ideas are fluid and complex. … He's always able to hear what isn't yet there."

It all comes together on his forthcoming CD, "Dreams." The band features percussionist Coco Berez, drummer Joshua McCormick, bassist Carroll Ellis III and guitarist Morgan Burrs, with Reed and Cook on backing vocals. The songs, many written during Brown's sojourn in Hong Kong, are cinematic and intimate. When he was younger, Brown wanted to be a writer but felt he lacked the life experience. Now that has changed.

"It is a very weird time," Brown says. "We have all these online identities, but people are very isolated. I have things I've learned, questions I want to ask. Music is a way that I can whisper them in your ear." S

Calvin Presents appears at Flora, opening for Colin Phils on Sept. 24. $5 cover. On Sep. 29 appearing with Richmond guitarist D.J. Williams and Friends at the Broadberry, $15 cover. The band appears every Thursday at F.W. Sullivan's with Dance Candy Free.