"The whole idea is, every cart tells a story," Norman says. He clicks play. The camera stares down at a checkout-line conveyor belt, and the viewer is presented with a riddle through a series of items, narrated by an announcer with a sly wink in his voice:

A fishing rod. A tackle box. A tent. And, an air horn.

Smash cut to a camping scene. It's morning. A grandfather sits with breakfast, waiting on his two grandsons, who still are snug in their sleeping bags. 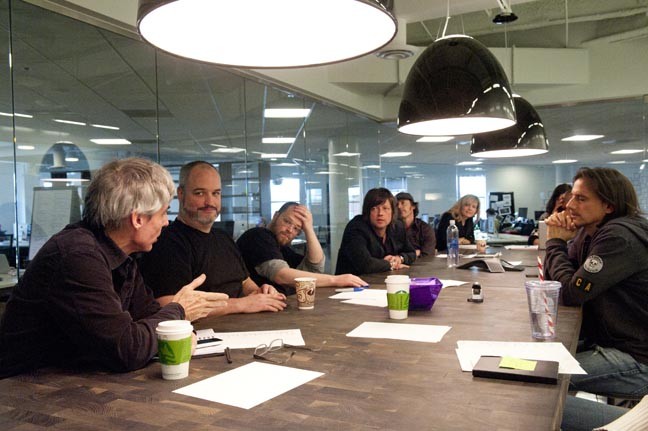 "Come on boys. Let's go, let's get up. This is a fishing trip, not a sleeping trip!"

And then, the payoff: He triggers the air horn, sending their tent flying.

Announcer: Get whatever you need, for whatever reason. Thanks to low prices every day, on every thing. Save money. Live better. Wal-Mart.

Norman chuckles, getting a kick out of the spots, though he's probably seen them more often than Wal-Mart shareholders check their stock prices.

"I feel like Wal-Mart's trying to own middle America," he says — "that's what everyone keeps saying. But really, they're trying to own families. And it's the one differentiation between them and Target and everyone else."

Being different is good. Capitalizing on how you're different is better. Norman's primary aim is to pinpoint what a company stands for — its brand — and how to convey that to the consumer while sparking a change in behavior. That's no big revelation in the advertising industry, but its execution is make-or-break, money gained or lost, a message engrained or fleeting.

Executing a creative solution comes down to a gentle mix of art and craftsmanship, the science and mystery of persuasion and emotion. Those who know Norman say he stands at the intersection of these things. That he discovers the insight, understands a compelling story, knows how to show it and makes you feel.

Norman says creative problem solving should begin with asking simple questions — What are we doing here? — early on. "The creatives have to be involved in the original staging of what the challenge is," he says. "It's like an artist. An artist will find an issue, whether that's an internal issue ... or something that's going on in the world, and they will commentate on it. They'll create their expression of it."

Often, he says, the attempt stumbles when it's the result of an assignment — a missive to create a television commercial as opposed to zeroing in on a key business or brand problem in the beginning. "And that's where the creative process starts," he says — getting to the bottom of the challenge and how to go at it: "It seems really stupid, right? But the machine can take it over, you know?"

The mainstay of Norman's creative approach is that the work must visually tell a story. Imagine a commercial that connects with you no matter the language. For Norman, his visual acumen also seems to serve as something between a security blanket and a muse. "When I can't find the right answer," he says, "I can just go draw some pictures, or design something, and it will open up a lot more doors."

It's been that way from the beginning, since he was known as John Eisenberg.

You paint the picture

With colors squeezed from your hand.

Weren't you the kid

Who just climbed on the merry-go-round

In the pictures of Norman's story, there are cars. Like the first commercial product that sold him — the gadget-filled, super-fast Mach 5 from the animated "Speed Racer." He drew it to make friends while moving from one place to another.

Then there was the inside of a much slower car, the scene of his earliest memory around age 6. He was riding with his grandmother, whom he called mom: "And I remember her telling me, 'Well, I'm not your mom, I'm your grandmother.' And I said, 'What's that?'"