The South fell, and Richmond went up in flames. But the Civil War is still here — if you know where to look.

White House of the Confederacy 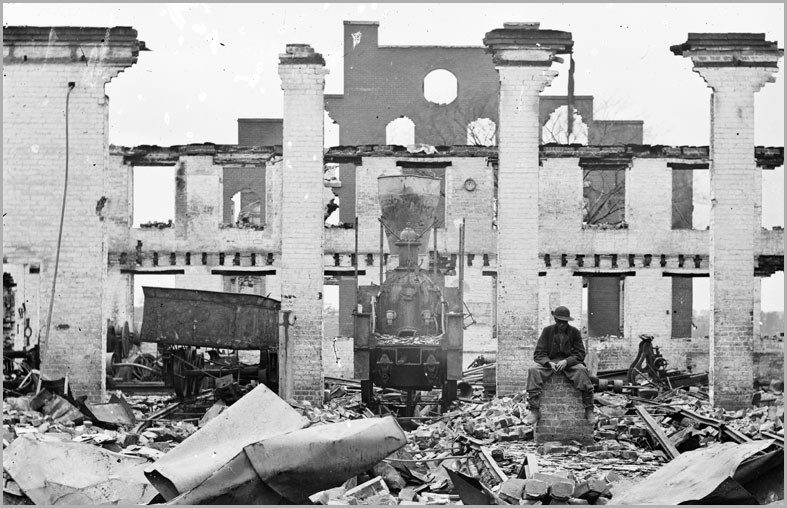 Before a nation could be reborn, a city would burn. At the end of the Civil War, Confederate troops destroyed almost all that was Richmond. It was a final act of great defiance, an attempt to keep supplies in a city rich with resources out of Union hands.

As the nation begins its commemoration of the 150th anniversary of the Civil War and emancipation, much attention will fall on Richmond -- or so tourism officials and civic leaders hope. It was Richmond that served as the capital of the Confederacy and whose capture was topmost in the minds of Union strategists.

On the occasion of the war's sesquicentennial, however, the physical and architectural evidence of antebellum downtown Richmond were mostly destroyed by flames, particularly those places that figured in the political, military and social life of the Confederacy. Unlike other Southern cities such as Charleston, S.C., Savannah, Ga., and New Orleans that evoke the past in their rich architectural legacies, Richmond has lost most of its Civil War-period fabric. Instead, visitors will find a modern cityscape of high-rise buildings, parking decks and interstates. Much of the loss of building stock was due to the evacuation fire of April 1865 which destroyed some 800 buildings downtown. Much of what the fire didn't destroy, Richmonders, so often accused of living in the past, managed to eliminate by other means.

If one looks closely, however, there are pockets of history to be mined, places that survived the post-war flames.

IT WAS RICHMOND'S most harrowing day, ever. On Monday morning, April 3, 1865, the lower business and residential district was the scene of increasing devastation. Fires that had been set before dawn to destroy supplies and warehouses along the riverbank -- to keep them out of Union hands approaching from the east -- had inadvertently spread. Flames consumed block after block of downtown real estate. The previous day thousands of Richmonders had fled the Confederate capital: Government officials, including President Jefferson Davis and his cabinet, boarded the last train to cross the James River en route to Danville, just before the railroad bridge was torched.

Still, hundreds of Richmonders who stayed behind, including many African-Americans, lived and worked within the fire's encroaching path. The lucky ones hauled whatever possessions they could grab to the relatively safe confines of Capitol Square. Others watched helplessly as the proud old city -- and the world as they'd known it -- went up in smoke.

Among the last to budge was Martha Pearce Stanard, a wealthy widow and one of the city's grande dames. She lived in the block immediately west of Capitol Square on Eighth Street (where the Supreme Court of Virginia building now stands). Throughout the war, the well-appointed home of this native Kentuckian had been the scene of one of Richmond's major salons. Visiting dignitaries and local luminaries alike enjoyed Stanard's company and hospitality.

On this April morning as chaos and flames raged throughout her neighborhood, Stanard stayed calm and behind closed doors. Finally, when the steeple of the United Presbyterian Church, directly across Eighth Street from her house, caught fire and collapsed and the sanctuary erupted in fire, she took action.

Standard went upstairs and with the help of a servant packed a trunk with clothing, jewelry and other personal possessions. Then, dressed in her finest dress -- and wearing a veil, gloves and bonnet -- she took her belongings to the sidewalk. Seated on the trunk, Stanard archly surveyed the kaleidoscope of smoke, heat and confusion through her lorgnette. When passersby offered assistance, she waved them off.

Wittingly or not, as Stanard survived the turmoil that morning, she also witnessed the passing of one era -- politically, racially, socially and architecturally -- and the transition to what would follow the Civil War.

What became of Martha Pearce Stanard, Confederate Richmond's merry widow? Like all Richmonders after the seismic changes of April 1865, she moved on to the next chapter. Stanard moved to Washington after the Civil War where she established the same excellent reputation for hospitality that she had enjoyed here. After she died, however, her final wish was respected: She was brought to Richmond and buried in Shockoe Cemetery.

While the evacuation fire destroyed much of the lower downtown district, close examination today reveals a dozen or so prominent structures that were standing during Confederate and slavery times. Some of these buildings, like the capitol and the former U.S. Customs House-turned Confederate executive office building (now the Lewis F. Powell Jr. United States Court House) have been enlarged significantly. Almost 150 years later and on the occasion of the Civil War's sesquicentennial, others are remarkably intact, albeit often dwarfed or crowded by larger, taller and sprawling structures that mark 21st century Richmond.