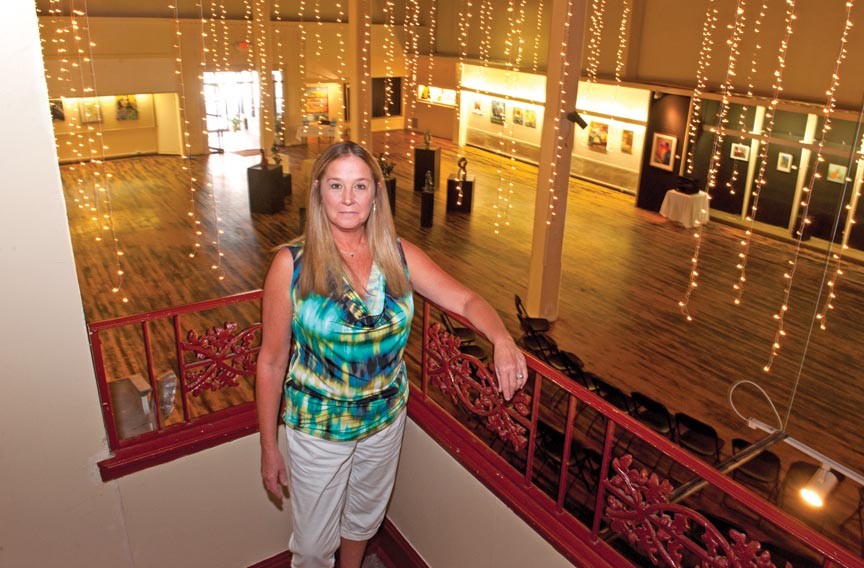 It's a story artists know all too well.

They set up their studios in a grungy neighborhood — and in doing so, unwittingly make it hip. Rents go up. And the artists, like hermit crabs, must scuttle away to find new homes.

That's what happened to Donna Jacobs. With her brother, Rusty Davis, and mother, Deanna Thomas, she founded the storied Shockoe Bottom Arts Center in 1994. Nine years later, in 2003, the lease ended and the building's owner prepared to put apartments in the now-popular area.

The arts vacuum created by the arts center's demise was filled by other art galleries, such as Art Works at 320 Hull St. and the Crossroads Art Center on Staples Mill Road. But what of Jacobs?

After the closing of the Shockoe Bottom center, she had the chance to start all over again. The city of Petersburg approached Jacobs' family, offering them the 1838 Butterworth Building at 132 N. Sycamore St. for $1. The catch: They had to commit to spending $250,000 on the restoration of the building and stay there at least 10 years.

The bet paid off. Jacobs says 25 to 30 artists from the Shockoe Bottom center followed her south, though only three of those are now among her residents. With 120 artists in 85 studios, a waiting list for space and two large galleries — including an 8,000-square-foot main one for exhibitions and event rentals — the Petersburg center, sometimes known by the acronym PRAC, celebrated its ninth anniversary in July.

Even though she's lost the assistance of her mother and brother, both of whom have entered nursing homes because of declining health, Jacobs has been busy building support for the arts in Petersburg. She was instrumental in starting the city's Fridays for the Arts (second Friday of each month), which includes a juried, multimedia opening at the center with refreshments, open studios and galleries and often, local musicians. Applause erupts from a lively crowd — usually about 200 people — when recipients of each month's $600 in prize money step forward. At the center's first national juried show Oct. 12, Jacobs will award $1,200 in prizes.

She's also proud that the center is host to a free student show twice a year and a photography show (with a $5-per-image entry fee) twice a year to encourage local students and photographers. Approximately 2,000 people visit the center monthly.

The center has cost much more than the original dollar bill. "My family has spent close to $500,000 on the Butterworth building up to this point," Jacobs says. "This old building soaks up money as fast as I can get it — but Petersburg loves us!"

Petersburg's economic development manager, Vandy Jones, testifies to the love. While the bottom-line economic impact might be what the building's improvement adds to the city's real-estate tax base, the center brings much more to Petersburg, he says. "A lot of people have had their first exposure to the arts in Petersburg during that event and returned later," Jones says. He notes that a few artists have left to open galleries elsewhere in the city, and that the center "is really an arts incubator for Petersburg."

Expressionist artist Roger McClung of Williamsburg sings the praises of the old Shockoe Bottom center, but he nevertheless moved to Petersburg while renting studio space at the art center. "You can't be everywhere [in exhibitions]," he says, "and Petersburg is kind of isolated and needs better promotion." Though no longer at the center, he still exhibits in Petersburg, as with his current display of small, abstract works at the popular sushi restaurant Wabi Sabi.

Mary Montague Sikes, a West Point artist who exhibits widely in Richmond, says she's at the Petersburg center "because of loyalty." She followed Donna and her family from Shockoe Bottom, though Petersburg is "still a tough market," she says.

She shares McClung's concern about marketing, though she's noticed a bigger push recently. Plus, Petersburg is more affordable, she says: "PRAC's prices started about the same [as Richmond's], but PRAC is now lower, and spaces there are bigger as well."

Aware of the need for stronger promotion, Jacobs recently hired a part-time worker to handle marketing responsibilities. Considering the expansion taking place at Fort Lee, she's been frustrated by her inability to tap the military market. But she doesn't give up easily. During Labor Day weekend she was giving a pile of postcards to a Fort Lee colonel for on-post distribution, offering a military discount and hors d'oeuvres to an event.

"Donna and Rusty never got the recognition they deserved for their trailblazing work in the arts," says Paula Demmert, a photographer in residence Art Works. "Their efforts created an explosion of the arts in Richmond." Nine years later, they're doing the same for Petersburg.

The Petersburg Regional Art Center is at 132 N. Sycamore St. Its next juried show reception is Friday, Oct. 12, at 7 p.m. For information call 733-8200 or visit pracarts.com.