Richmond issues in the spotlight include city mismanagement, aging schools, and building on that bike momentum.

by Peter Galuszka and Leah Small

Spiffed-up streets, paved potholes and kind media attention are part of the afterglow of the successful UCI Road World Championships. For years, the project that brought Richmond its biggest sporting event took time, energy and focus from staff, volunteers and City Hall.

With Broad Street back open and cyclists moving on, there’s a renewed interest in making bicycles a larger part of local living. There’s also plenty of unfinished business, a sentiment that other priorities loom large and the question of what comes next.

With a big marquee event in the rearview mirror, there are myriad challenges whose solutions have been slow to come by. The list includes the mess in municipal finances, poverty, chronic weakness in public education, a lack of direction for public housing and the uncertainty about honoring the memory of hundreds of thousands of slaves.

Here’s a snapshot of where things stand.

The comprehensive annual financial report was due in November. State officials are noticing.

Local governments are legally bound to submit annual reports to her office. There’s no penalty if they’re late, she says, but if they file to perform an audit the state can step in and do it for them. Richmond’s situation is “unusual,” Mavredes says. Jones’ spokeswoman, Tammy Hawley, says that there had been no clear deadline.

The tardiness has hampered planning and speaks to the turmoil in general during the tenure of Mayor Dwight Jones, who came into power promising to clean up the messes left by his predecessor, former Gov. Doug Wilder.

Under Jones, Richmond has gone through a slew of administrators. Some of them have lasted only a few weeks. The latest chief administrative officer is Selena Cuffee-Glenn, assisted by her deputy, Lenora Reid. They were brought in this summer as ringers from Suffolk’s government to straighten things out.

Similar managerial uncertainty has hampered the Richmond Redevelopment and Housing Authority, which has been without a permanent director since Jan. 30, when Adrienne Goolsby abruptly resigned. T.K. Somanath has been filling in for months for the authority, which is chronically short of funds and services. Federal officials have questioned the authority’s procurement policies for such services as pest control totaling $6.5 million.

The struggle to fight the city’s 26-percent poverty rate continues with the mayor’s Maggie L. Walker Initiative for Expanding Opportunity and Fighting Poverty and other projects, but concrete evidence of progress seems elusive.

Richmond is faced with schools that are leaking, crumbling — and in some cases, being forced to close temporarily — after countless Band-Aid repairs to aging infrastructure.

The strain of constant fixes came to a head last week, when the Richmond School Board voted to close Armstrong High School until emergency repairs could be made to its failed cooling system. However, the repairs were not successful. A portable AC unit was used instead. School closed for a day, but it’s unclear how long the quick fix will hold. School officials estimate that replacing the unit will cost about $1.5 million.

Armstrong’s woes are just a few on a five-year list of structural items that long have exceeded their typical lives. A facilities infrastructure assessment for fiscal years 2014-’18 details estimated needs of a combined $79.4 million for numerous repairs and replacements.

But that’s only a short-term look at a bigger picture.

In April, a school system task force charged with coming up with solutions to improve infrastructure recommended the construction of a high school, four elementary schools and two middle schools for an estimated price tag of between $620 million and $645 million. Overcrowding also was cited as a reason for the recommendations. To make do last year, the School Board voted to move students from the former Elkhardt Middle School to the former Clark Springs Elementary school because of safety concerns.

The School Board and City Council are expected to outline solutions for the most immediate needs, such as the replacement of the cooling units at Armstrong, during a joint meeting Oct. 12.

As for where schools should fall on the city’s to-do list, School Board Chairman Donald Coleman says, “I don’t know how the next mayor can’t actually commit it as the No. 1 priority.”

Plans to commemorate Shockoe Bottom’s slave trade history no longer are hitched to a ballpark in an arranged marriage to spur the area’s economic development.

Until recently, Jones’ plans for sparking growth in the Bottom, including a possible slavery museum, centered on a stadium as a central driver. But those much-debated plans hit a wall, and he announced this summer that regional talks were underway to find another home for the Richmond Squirrels baseball team, either in the city or counties, by the end of the year.

“Revitalize RVA isn’t on the table anymore,” Hawley, the mayor’s press secretary, told Style of the Shockoe plan last week. “The matter is now in the Squirrels’ hands. They are reviewing their needs and researching available sites and have until the end of the year to come back with their preferred location recommendation.”

So where does that leave plans to commemorate the Bottom’s black heritage sites?

The mayor is pushing ahead with plans for $19 million in state and local funding for projects such as developing the site of Lumpkin’s Jail, where many slaves were imprisoned, beaten or died. For the first time, Jones says, there’s enough money to make the effort a brick-and-mortar reality.

The state has allocated $11 million in its budget to be used for Shockoe heritage projects, and there’s more than $8 million in local funding dedicated to establishing a commemorative pavilion at Lumpkin’s.

But about half of that money is unavailable until the work is finished. Only $2 million of the state funding is available up front. The city will receive the remaining $9 million when efforts at Lumpkin’s are completed. Of the existing $2 million, half is dedicated to improvements made on the Slave Trail, with the other half dedicated to costs associated with erecting the pavilion.

Also unknown is what form the sites will take. Will they include primarily outdoor exhibits, hands-on methods for tracking genealogy or will it involve only Lumpkin’s Jail?

To get ideas, the Richmond Slave Trail Commission is holding a series of public discussions. Delegate Delores McQuinn, who chairs the commission, says they’re meant to include all views about what Lumpkin’s should look like, and that plans aren’t solidified.
Critics question how open the process will be, saying that the commission operates in a clubby, exclusive way. The terms of many board members expired years ago.

Phil Wilayto, of the Defenders for Freedom, Justice and Equality, cautions against focusing too tightly on Lumpkin’s Jail while ignoring other important heritage sites. His group is pushing a 9-acre memorial park that would include the African Burial Ground and two blocks east of the CSX railroad tracks, between East Broad and East Grace streets to North 17th Street.

“You cannot reduce the story of Shockoe Bottom to one jail site,” Wilayto says. “Things would be out of sight, out of mind.” 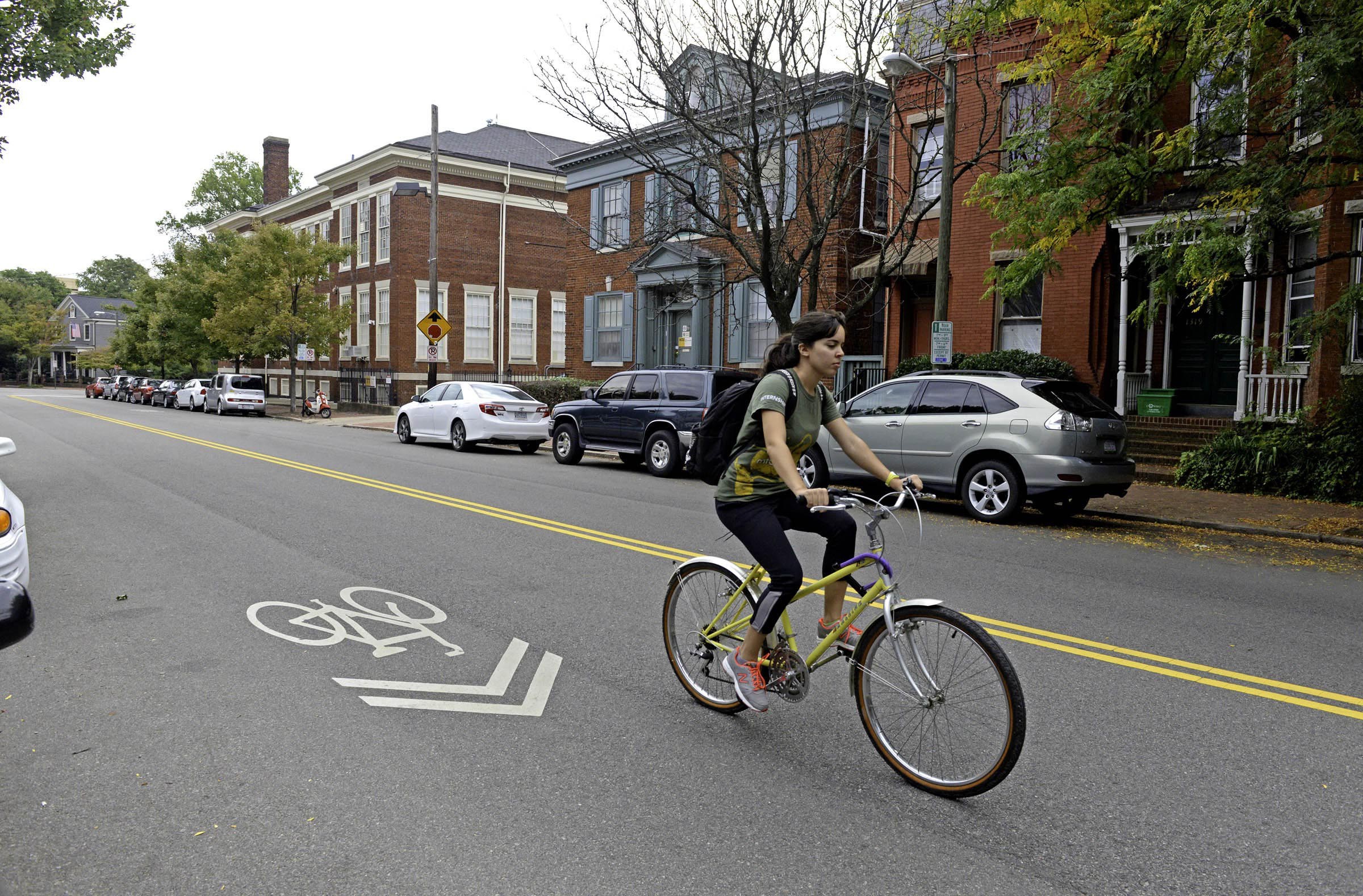 The New Age of Bikes

The UCI World Road Championships have left more enthusiastic interest in expanding bicycling in the region. But how communities are embracing it varies widely.

Richmond’s master bike plan, completed in 2014, is based on adding sharrows and bike lanes, but it has run into some snags. Bike lanes through the Floyd Avenue Bike Boulevard in the Fan District have been delayed this fall, but the 52-mile-long Virginia Capital Trail connecting downtown with Williamsburg has been finished.

The city now plans a second bike boulevard on 29th Street in Church Hill, with City Council agreeing to seek $520,000 in federal funding and the city paying $130,000.

Like the Floyd Avenue project, Church Hill’s bike-friendly corridor will be engineered to discourage cut-through traffic and slow cars going straight through. It will link to Libby Hill Park, the Fairfield Court public housing project, the Capital Trail and Armstrong High School with an expected price tag of $650,000.
Another proposal would create bike lanes on First and Second streets and would link the Lee Bridge and Oregon Hill.

For really big bike path ideas, look no further than Chesterfield County. It has put together a whopping, multidecade plan for 362 miles of new bike trails that would cost $360 million. While they’re likely to be scaled back because of public resistance to cost, the plans would connect such features as Pocahontas State Park, Lake Chesdin and big subdivisions such as Woodlake, Brandermill and Charter Colony.

Henrico County, by contrast, looks downright scruffy. Its bike planning consists of a few paragraphs in a chapter of its 2016 Comprehensive Plan. S


Editor's Note: This story has been updated to reflect the news that the city had completed its annual financial report. The announcement had occurred after Style Weekly's press time. This story also reflects a correction to the print version, which stated that emergency repairs were successfully made to the AC unit at Armstrong High School.